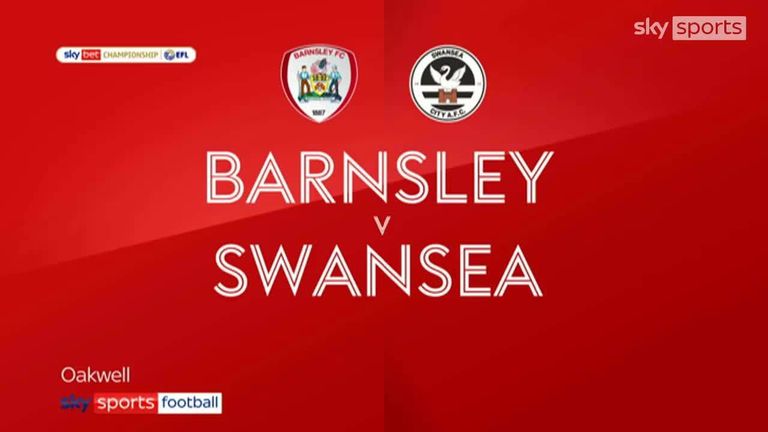 Highlights of the Sky Bet Championship clash between Barnsley and Swansea

The result also meant the Tykes have now failed to beat the Swans in the last 15 meetings between the two teams since the 2006 League One play-off final that was decided on penalties at the Millennium Stadium.

It was a difficult baptism for the former Sweden U21 manager, who was given a valuable insight into his new charges' shortcomings.

Earlier, a low-key first half had seen Barnsley offer no attacking threat, while Swansea's painfully patient possession game bordered on tedium as pass after pass led to no penetration in the final third.

Right until the stroke of half-time, the only significant attempt on either goal saw an overhit ball from Swansea right-back Ryan Bennett bounce gently through to home 'keeper Brad Collins.

For the Reds, Callum Styles was playing with more positivity than most on the pitch and the midfielder teed up a 25th-minute chance for Dominik Frieser that only got as far as the edge of the box before being blocked by Ben Cabango.

The Swans finally found a little attacking spark in the 44th minute as Ethan Laird's downward header was kicked off the line by Styles.

Laird then turned provider, pulling the ball back for Joel Piroe, who drove narrowly wide from 12 yards.

Barnsley began to assert themselves more after the restart with Devante Cole charging past Kyle Naughton down the right flank and crossing for Cauley Woodrow, who could not get sufficient power on his close-range shot to extend visiting goalkeeper Ben Hamer.

A surging forward charge by Romal Palmer was then halted by Flynn Downes and Josh Benson curled the resulting free-kick over.

At the other end, Paterson's left-wing cross led to a stooping Laird header at the far post that was routinely gathered by Collins.

But Collins was left to pick the ball out of the net following the next attack in the 74th minute. Ryan Manning raided down the left flank before delivering a cross that picked out fellow replacement Ntcham's unchecked run and the former France U21 international tapped in from three yards.

The Swans doubled their advantage six minutes later as Piroe fed Paterson through the left channel and he was allowed to advance unchallenged into the home box before firing inside Collins' far post from 15 yards for his seventh goal of the season.

Moments later, the game was stopped after a disgruntled home supporter invaded the pitch and Swansea went close to adding a third in stoppage time when Liam Cullen fired inches over.

Barnsley's Poya Asbaghi: "In the first half, we were a well-organised team and did not allow Swansea to create any big chances until the last minute of the first half. As a spectator, I would have fallen asleep, because it wasn't a super fun game to watch, but our ambition was not to make it the most fun game we could. We wanted to work well as a unit, which we did until half way through the second half when we did something we hadn't done all match by losing concentration. Our reaction after conceding the first goal could have been better, but I know we won't be the team with the highest confidence in the division at the moment.

"That's really normal in this situation, but how you gain confidence is by having an organisational set-up that you can rely on. We had that for about 68 minutes and have got to develop that for a longer time. As players and management staff, we cannot look at the table and get stressed. I know the fans will, but we've got to keep working and then look at the table at the end of the season."

Swansea's Russell Martin: "Olivier injected a lot of forward momentum and plays with such a swagger and confidence. He gave the team a lift for sure and Ryan Manning also showed his composure for the cross. It was a really nice move and a great goal. But I was really pleased and proud of all the guys. It was a really dominant, controlled performance with lots of purpose and patience.

"There was a real understanding of each other's roles and the concentration levels were very good. We were good at the little details, including our discipline to play in possession and not get frustrated or anxious. I really enjoyed the first half. I know it wasn't very exciting, but I thought we took a lot of energy out of Barnsley."