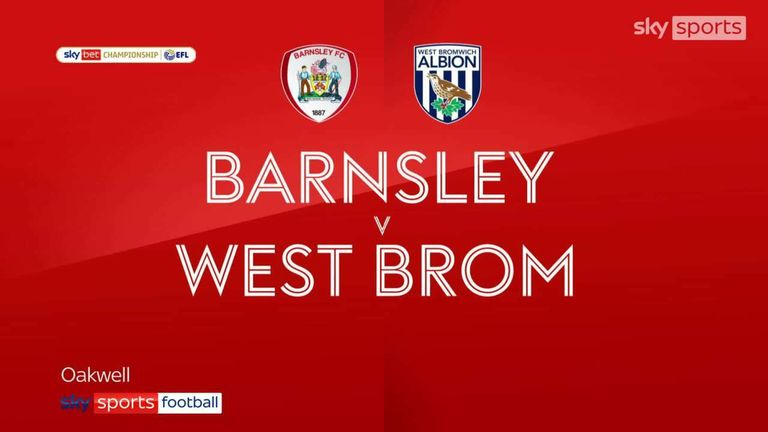 West Brom missed the chance to continue their recent resurgence and edge closer to the automatic promotion places after a 0-0 draw with Barnsley at Oakwell.

In a game of few clear chances, it was the Baggies who came closest to breaking the deadlock, with Cedric Kipre hitting the post, Jordan Hugill seeing a shot blocked on the line and Karlan Grant denied by a last-ditch clearance late on.

Unable to show a cutting edge in the South Yorkshire fog, their search for a first away win against the Tykes since August 1947 continues.

Valerien Ismael's men stay third, two points behind second-placed Bournemouth as a result, though they could be leapfrogged by Blackburn should they beat Birmingham on Saturday. Barnsley, meanwhile, sit 23rd and seven points from safety at the halfway point of the season.

How the Baggies were thwarted again

The weekend's Covid-hit Championship action got under way at Oakwell, where Poya Asbaghi was searching for a first win as Barnsley boss, with the return of former chief Ismael and midfielder Alex Mowatt also prominent in the pre-match narrative.

West Brom so very nearly made the perfect start. A typically accurate free-kick delivery from Mowatt found Kipre, who broke free of Liam Kitching's clutches and headed against the right-hand post with goalkeeper Brad Collins beaten.

With the Baggies having begun getting their promotion form back on track with successive wins over Coventry and Reading, it could have been a sign of things to come, but the hosts showed endeavour to put their stamp on the game. In terms of chances, however, Callum Brittain's shot over the bar from 20 yards was about as good as it got.

Ismael's men continued to dominate the ball and, at one point, had 79 per cent possession, but they lacked the spark in attack. Hugill should undoubtedly have done better when his connection with Conor Townsend's square ball was blocked on the line by Brittain, too.

Various half-chances for West Brom then punctuated an otherwise scrappy second 45 minutes. Michal Helik recovered superbly to turn Karlan Grant's shot away after he was set free by a cute ball from Grady Diangana, while Furlong was punished for indecision in the box and Matt Clarke headed onto the roof of the net as Ismael fumed on the touchline.

In stoppage time, Helik caught Hugill on the thigh with a high boot and studs in the centre circle, leaving the striker in a crumpled heap. There were appeals for a red card, but referee Tim Robinson produced just a yellow, much to Hugill's dismay.

Man of the match - Michal Helik

West Brom have, historically, struggled at Oakwell and Friday night was no different. But it might have been a different story had Michal Helik not been in the Barnsley backline.

The Poland international marshalled the hosts' backline and did plenty of dirty work to snuff out attacks from Valerien Ismael's men throughout the 90 minutes. He was, perhaps, fortunate to stay on the pitch after the late incident with Jordan Hugill, but his admirable defending is what will stand out from this game.

Barnsley's Poya Asbaghi: "We worked hard defensively against a tough opponent. They are really physical and I think we tried to stand up against them, take on the fight, work hard together and keep a clean sheet. Of course, they will create chances, but in the end, it was a good team effort defensively.

West Brom's Valerien Ismael: "It's clear, we needed to score goals to win today. It's like a broken record every week, exactly the same. We played well and created the chances we needed, but, at the end of the day, it's all about the desire - the desire to score the goals - and the players need to take responsibility at some point and not be sloppy in front of goal.

"We know it is difficult; you never know what can happen in such a game. It's frustrating tonight because we should take the three points."