Report and highlights from the Sky Bet Championship clash between Blackpool and Coventry at Bloomfield Road as Viktor Gyokeres scored the only goal of the game in victory for the Sky Blues on Tuesday night. 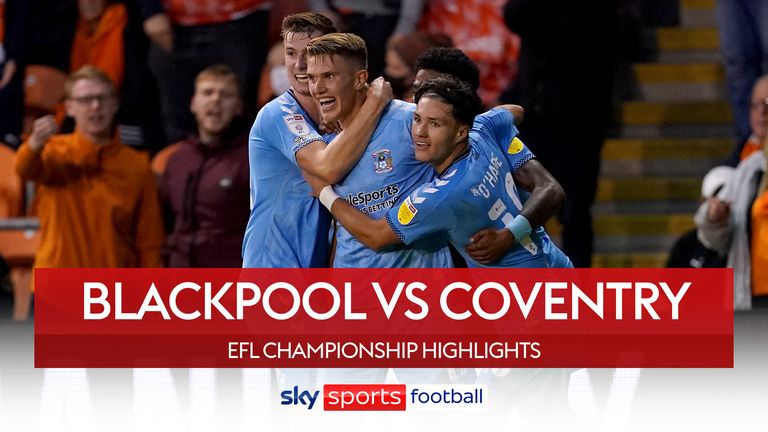 Highlights of the Sky Bet Championship match between Blackpool and Coventry.

Viktor Gyokeres' goal on the stroke of half-time was enough to secure Coventry a 1-0 Sky Bet Championship win at Blackpool.

The striker turned the ball in from close range to earn the Sky Blues a second victory of the season.

Northern Ireland forward Shayne Lavery spurned a number of opportunities for the newly-promoted Seasiders, whose wait for a first league win on their Championship return goes on.

Coventry started the brighter and had the first chance after six minutes as Gyokeres' low shot was held by Chris Maxwell.

The Swedish striker was presented with another opportunity six minutes later as Richard Keogh lost possession bringing the ball out from the back and Gyokeres hit the outside of the post from the left edge of the area.

Coventry continued to dominate, with Gyokeres again breaking in behind Keogh after 23 minutes before pulling back to Callum O'Hare who fired wide from 12 yards.

Blackpool began to grow into the half, with Jerry Yates muscling his way in only to be denied by Sky Blues goalkeeper Simon Moore.

The Seasiders' best opening came on 40 minutes as Keshi Anderson slipped in Lavery, who jinked inside but curled wide when one-on-one with Moore.

Lavery again came up short when clean through on goal and was soon made to pay as Coventry went ahead in first-half stoppage time.

Fankaty Dabo's cross from the right was parried by Maxwell onto the onrushing Gyokeres and rebounded into the net - with the Blackpool goalkeeper appealing in vain for handball.

Coventry again started the second half strongly as O'Hare saw a shot deflected wide after a jinking run.

But Blackpool had another great chance after 56 minutes as Yates' flick sent Lavery clear only for the Northern Irishman to be foiled again by Moore.

The visitors' keeper was again required to push away a fierce strike from Anderson on the hour mark, before Maxwell had to make a fingertip save at the other end after Gustavo Hamer cut through the Blackpool defence.

Moore was called into action once more in the 70th minute to acrobatically tip Luke Garbutt's free-kick from the right over the crossbar.

Coventry appealed strongly for a penalty seven minutes from time when Martyn Waghorn went down under pressure from James Husband - but the former Derby striker was booked for diving.

Blackpool pushed for an equaliser and a great chance was squandered in stoppage time by CJ Hamilton, who blazed over from 15 yards after a smart cutback from the byline by Callum Connolly.

Blackpool's Neil Critchley: "Having seen the goal back he is offside and it is after the time. He only put a minute up and it is after the 46 minutes so it is hard to take. I can't fault the players, we created a lot of chances but we didn't take them and if you don't take your chances you lose games of football.

"You can feel it on the side of the pitch, there is a big difference between League One and the Championship in the quality of the play, the physicality and the speed. You have to think quicker with and without the ball and you get tested all over the pitch."

Coventry's Mark Robins: "It should have been three points on Saturday but you have to be ruthless. If you are creating those chances, you have to put them away. But it is really early days and we have to be pleased with where we are at two points-a-game at the minute.

"To come away and get the three points here is really, really important. We are very pleased in that dressing room. But we know have got a lot of work to do really in some areas of the team."