Report and highlights from the Sky Bet League One play-off final between Blackpool and Lincoln at Wembley as the Tangerines come from behind to seal 2-1 win and promotion back to Championship for first time since 2015. 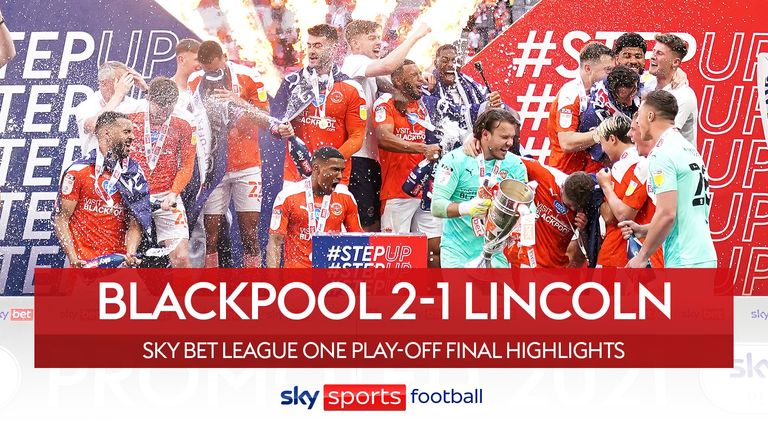 Highlights of the Sky Bet League One Play-Off final between Blackpool and Lincoln.

Blackpool will return to the Championship for the first time since 2015 after beating Lincoln 2-1 in the League One play-off final at Wembley.

The Tangerines had fallen behind to the fastest goal in third-tier play-off final history, as Ollie Turton's own goal found the back of the net after just 48 seconds, but they rallied to turn the game round as Kenny Dougall struck either side of half-time.

It is the latest landmark moment in the rejuvenation of Blackpool - a club that had fallen from the Premier League in 2011 to League Two within five years due to off-the-pitch turmoil. It was also their sixth play-off final win, more than any other side, and their 14th victory in their last 18 play-off games.

For Lincoln, it's a third play-off final defeat from as many attempts in their history. Their hopes of reaching the second tier for the first time in 60 years are over for another year, but the future still looks very bright for a side that were in non-league as recently as 2017.

Lincoln were held up by the London traffic on their way to Wembley, but it's safe to say their late arrival didn't have any impact on their start to the final, as within the opening minute they were in front.

An attack down the right saw Brennan Johnson pull the ball across the six-yard box towards Tom Hopper, but he missed it and Turton, standing behind him, couldn't sort his feet out in time to do anything other than turn the ball over his own line.

It was the worst possible start for Blackpool, but they rallied superbly and eventually found their way level after 34 minutes. Jerry Yates and Elliot Embleton combined well at first, and then the latter squared for Dougall, who fired in from the edge of the area.

And it was Dougall again, from almost the same position at the other end of the pitch, who put them ahead on 54 minutes. This time it was Yates who teed him up perfectly, allowing the midfielder the opportunity again to stick the ball into the bottom corner. The Australian became the first Blackpool player to score more than once in a match at Wembley since Stan Mortensen's hat-trick in the 1953 FA Cup final.

Lincoln boss Michael Appleton made changes in hopes of getting his side back level, introducing Callum Morton and Anthony Scully, and Morton went close on 85 minutes to levelling the game as he was presented with a header by Brennan Johnson, but he could only nod over the bar. In the 93rd minute, the ball fell to Regan Poole just inside the box, but he lacked composure and could only curl it over the bar. After that, there was no way back for the Imps. 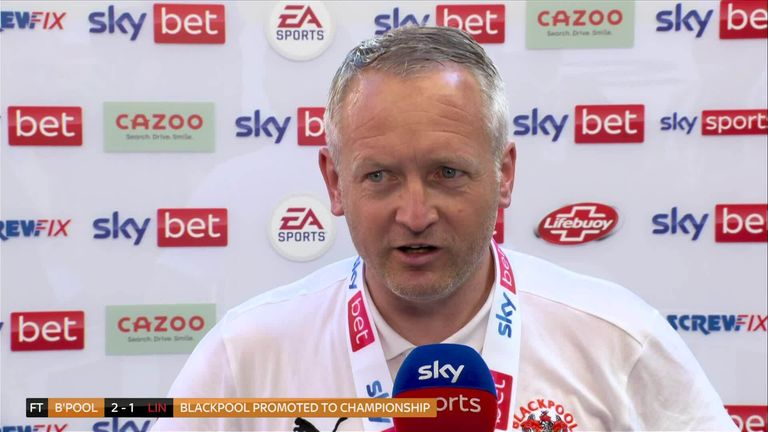 Blackpool boss Neil Critchley was full of praise for his side and the backroom staff following their Play-Off final win over Lincoln.

"It was how not to start a play-off final! You speak about managing the first five or 10 minutes and we did everything but. Our response after that was outstanding. I thought we were the better team in the first half. In the second half, we had to soak up a bit of pressure but that's only natural when you're winning the game.

"We limited them to very little and the performance typifies our season. Every single player, including the subs, were outstanding. We're under no illusions of how hard the Championship is and how tough it's going to be. But the club is progressing both on and off the pitch. We'll enjoy today, but we've already started planning for next season." 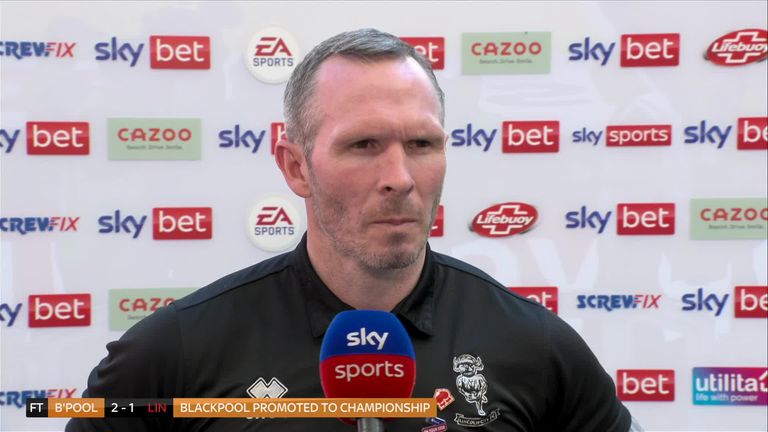 Lincoln manager Michael Appleton says he's disappointed his side didn't play as well as they are capable of as they lost to Blackpool in the League One play-off final at Wembley.

Lincoln's Michael Appleton: "We'll try to get over the disappointment of not winning the game today. We didn't play as well as we're capable of, but we've come a long way. We need to keep progressing and we need to keep getting ourselves into these types of positions.

"I've spoken in the past couple of years about scoring too early and I think we got caught up playing square and backwards in front of Blackpool and once they got themselves back into the game, their tails were up. They were two great finishes from the kid which was the difference. I thought we were OK, but OK doesn't win you these sort of games. I've got no doubt there's a high percentage of my players that will be back in this situation fighting in finals, whether it's with Lincoln or another club." 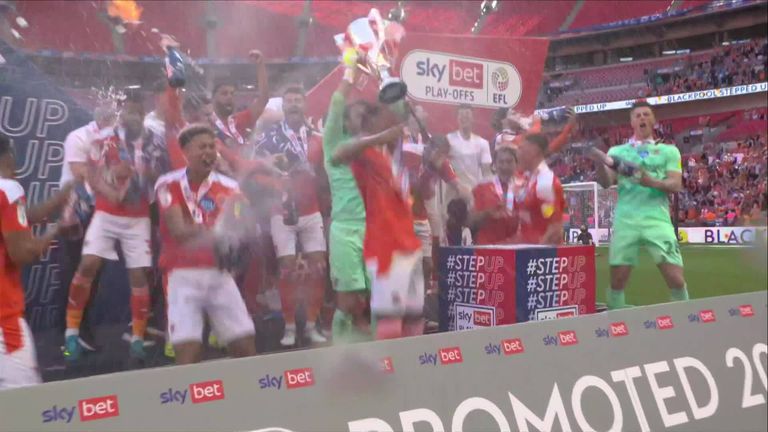 Blackpool lift the trophy after beating Lincoln 2-1 in the Sky Beat League One Play-Off final at Wembley.

"Full credit to Lincoln, I thought it was a really good game and a really good advert for League One football. Lincoln have had an incredible season, regardless of what's happened today but the best team won.

"Blackpool deserved to win. They're so strong and athletic and they got to things first. They had a guy who made the difference in Dougall but Yates was outstanding up front."

"You need everyone to buy into what the manager is doing and you need everyone on the same page if you're going to be successful and that's what Blackpool have done with Neil Critchley. They've bought into his beliefs.

"They went behind after 47 seconds but they just got stronger. Lincoln were surprised they were 1-0 ahead and they couldn't sustain it. Blackpool were tremendous with the way they controlled the game."

Man of the Match - Kenny Dougall 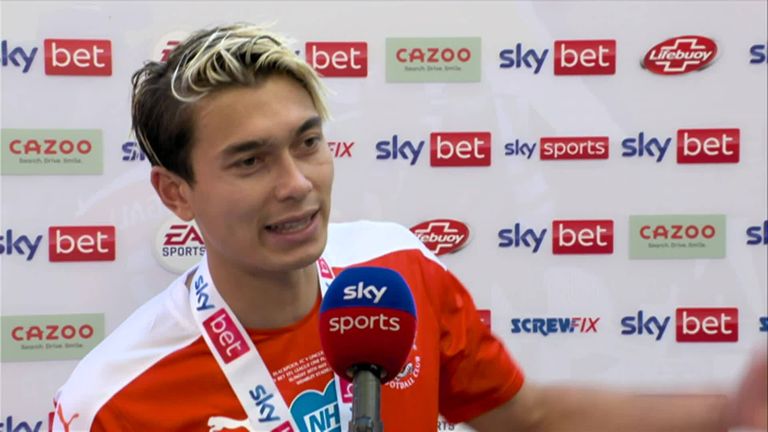 Kenny Dougall says he had a special play-off final after his two goals lead Blackpool to promotion.

"Of all the matchwinners out there, I'm not sure many Blackpool fans would have been anticipating it was him."

You've got that right. Dougall doubled his tally for the season at Wembley. The first man to score more than once in a game at the home of English football for the Tangerines since Mortensen. What a time to step up.

Blackpool will play in the Sky Bet Championship for the 2021/22 season, while Lincoln remain in League One. Both divisions start up again on Saturday, August 7.