Report and highlights from the Sky Bet Championship clash between Blackpool and Preston at Bloomfield Road as goals from Keshi Anderson and Gary Madine sealed victory for the Tangerines on Saturday afternoon. 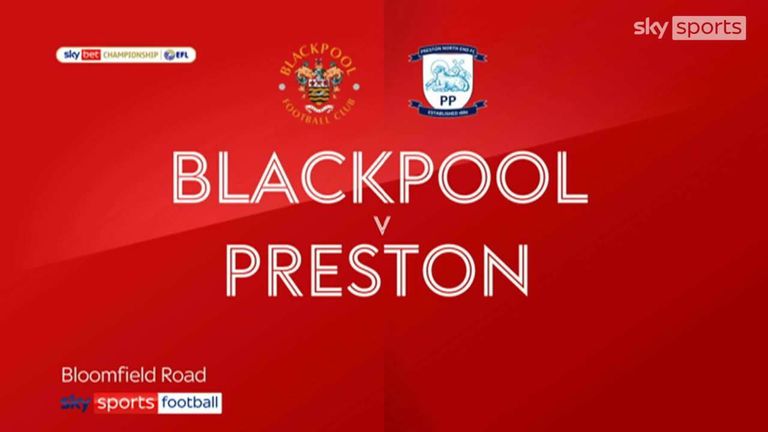 Blackpool gave their loyal supporters plenty to smile about by earning bragging rights with a superb 2-0 Lancashire derby victory over arch-rivals Preston.

Goals from Keshi Anderson and Gary Madine did the trick as the Seasiders delighted their fans at a packed Bloomfield Road.

It was also the Tangerines' first home win over their local rivals since a 2-1 triumph way back in December 1997.

And just to rub salt into Preston's wound, skipper Alan Browne was sent off for a second yellow card with almost the last kick of the game after an ugly melee broke out as tempers flared.

Winger Anderson scored his first league goal for 10 months with a sweet 27th-minute strike, before striker Madine - recalled to the starting line-up - slotted home on 68 minutes to complete a memorable victory.

Midfielder Ben Whiteman wasted a glorious chance to level for the Lilywhites early in the second half but he failed to even hit the target with only goalkeeper Dan Grimshaw to beat.

Victory for the hosts, in the first league derby between the two sides at Bloomfield Road since November 30, 2009, was their third in their last four league matches and continues their promising start to life back in the Championship.

Blackpool started the better and Ryan Wintle blazed over inside a minute, although at the other end, former Celtic and Manchester City winger Scott Sinclair rifled a shot which Grimshaw could only parry, before gathering at the second attempt.

Kenny Dougall dragged a shot agonisingly wide of the target but the hosts did get the opener just before the half-hour mark when Anderson coolly swept the ball into the bottom left corner with a sweet strike. Keeper Daniel Iversen was unmoved in the centre of the goal.

Preston striker Emil Riis had a penalty appeal turned down five minutes later after going down under a strong challenge in the area, but referee Tim Robinson was far from convinced.

Defender Richard Keogh headed over from Josh Bowler's lovely right-wing cross just before the break as the Seasiders almost doubled their advantage.

Whiteman should have levelled for the Lilywhites three minutes after the restart but he inexplicably shot wide with only Grimshaw to beat.

And that miss proved costly as Madine showed Whiteman how it should have been done with a smart finish to ultimately secure the points.

Strike partner Jerry Yates was the provider with a clever pass and Madine did well to direct his shot beyond Leicester loan keeper Iversen and into the bottom corner.

Having been booked just before half-time for pulling back Anderson, Preston skipper Browne saw his afternoon finish on a low point when he was sent off in injury-time for a second yellow after the rivals clashed in a heated finish to the contest.

Blackpool's Neil Critchley: "These wins are for the supporters - the three points is for them. It was an unbelievable atmosphere, it always is, but today it went up another level. The supporters will enjoy their night - and rightly so.

"We're finding different ways of winning football matches. We've had to battle and scrap but also play some good football in the first half. In the second half I felt we were quite comfortable, there was not a lot in the game."

Preston's Frankie McAvoy: "I'm disappointed with the score. I felt first half Blackpool were better, but I changed our shape and we got better. We had a chat at half-time and said we needed to be a wee bit more aggressive, like we were the other night against Coventry.

"We got our wing-backs higher up the pitch and really tried to make it as difficult as we could for them, which I felt we did on the main in the second half. But goals change games and I felt the difference was when Ben missed a fantastic opportunity to equalise. I felt we were the team in the ascendancy, but unfortunately we conceded the second goal."