Bournemouth 0-3 Watford: Nigel Pearson's side out of relegation zone with win 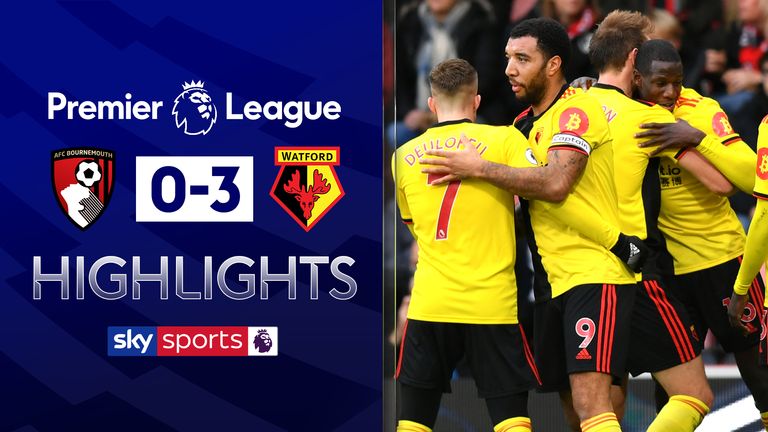 FREE TO WATCH: Highlights from Watford's win over Bournemouth in the Premier League

Bournemouth's miserable run of form continued as Watford's 3-0 win at the Vitality Stadium saw Nigel Pearson's side move out of the relegation zone for the first time this season.

Abdoulaye Doucoure (42) gave Watford a first-half lead as they capitalised on an error from goalkeeper Mark Travers, before captain Troy Deeney (65) doubled the lead midway through the second half.

Roberto Pereyra (90+2) wrapped up the three points for Pearson's resurgent Hornets, who climb to 17th after their third consecutive league victory.

The result sees Bournemouth slip to 19th, with one win from their last 11 league outings, and are two points from safety.

Man of the Match: Troy Deeney

The game began amid a rapturous atmosphere at the Vitality Stadium, with Bournemouth fans making their voices heard in what they knew was a crucial clash.

It was Watford, though, who made the faster start as Ismaila Sarr, Gerard Deulofeu and Deeney linked up well to find pockets of space behind the Cherries defence.

Sarr enjoyed the game's best chance during a tense opening, firing just wide of Travers' left-hand post when played through the right channel by Deeney.

Deulofeu then drew a smart near-post stop from Travers as Watford looked to press home their advantage, and just before half-time, Pearson's side pounced to take the lead.

Travers, who kept his place following Bournemouth's 4-0 defeat of Luton in the FA Cup, had a moment to forget, taking an awkward touch before skewing his clearance straight to Sarr just outside the box.

The Watford wide man then flashed a fierce ball across the box, which Doucoure brought under his control before firing into the top corner.

The second half continued with Watford in the ascendancy. Again, Sarr and Deulofeu played off Deeney to devastating effect, with Bournemouth unable to cope with the power and directness of Watford's relentless attack.

After Sarr and Deulofeu both spurned presentable chances, Deeney made no mistake as he smashed his side two ahead when the ball fell kindly to him inside the box.

The Hornets looked comfortable and confident as time and time again they cut through Bournemouth at will, Nathaniel Chalobah firing just wide after finding space on the edge of the box.

It wasn't until injury time, though, that Watford notched their third and final goal to seal the three points, with Pereyra expertly adjusting his body to fire a fantastic volley past Travers.

Man of the match: Troy Deeney

This was a performance of real guts, character and class by Watford, and the display of their skipper Deeney epitomised every inch of that.

His physical presence troubled the Bournemouth defence throughout, but it was his ability to play foil to Sarr and Deulofeu which was most impressive.

His emphatic second-half strike capped a brilliant individual and team performance, and Watford will rely on their talisman if they are to stay up this season. Bournemouth boss Eddie Howe said: "It was two quite even teams up until the first goal but then psychologically we dipped.

"Confidence is such a key thing - we've been on a really difficult run - and when something goes wrong, sometimes you don't respond in the way you normally would.

"The manager always has to take responsibility when things aren't going well. Instilling confidence is what I have to do." 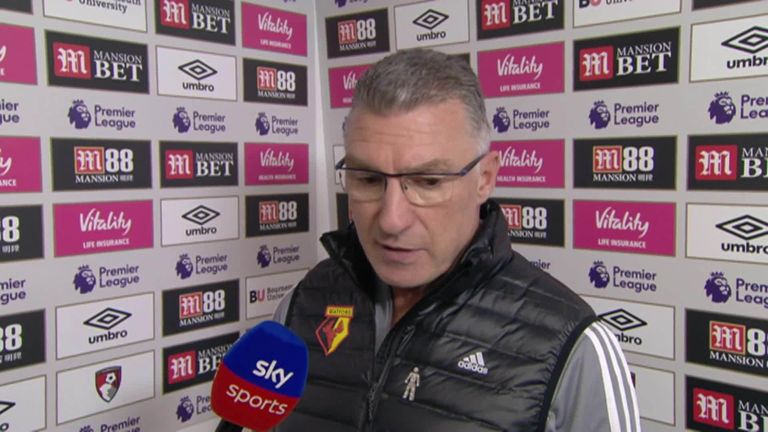 Watford boss Nigel Pearson said: "It's a big result for us for sure but it's just another step in the right direction.

"We have to keep our focus every single game but I'm not going to try and play down that it's an important result for us.

"I think the players have seen in themselves that they are capable of finding different ways to win games.

"It's not always about being able to play nice possession football and entertain people. Sometimes you've got to dig in and work your way into a winning position and that's what we did today."

Bournemouth face a trip to bottom side Norwich next Saturday (3pm kick-off), while Watford have an FA Cup replay vs Tranmere on Tuesday (7.45pm kick-off) before hosting Tottenham in the Premier League next Saturday (kick-off 12.30pm).