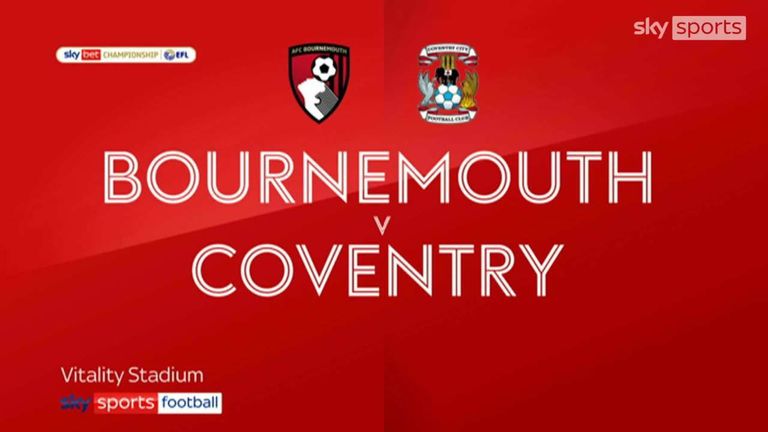 Highlights of the Sky Bet Championship game between Bournemouth and Coventry

The Cherries had been cruising after Jaidon Anthony's 45th-minute fluke cross-turned-shot before the winger turned provider for Philip Billing in the second half.

But Jefferson Lerma's 68th-minute red card for a last-man tackle on Matt Godden turned the game.

Godden pulled one back with five minutes to spare before Kane calmly slotted in the leveller deep into stoppage time to prevent Bournemouth from retaking top spot in the Championship.

Both sides were forced to dig into their defensive ranks after a spate of injuries and illnesses.

Michael Rose was taken ill overnight for Coventry, while Steve Cook made his first Cherries start since the play-off semi-final first-leg last season - the home side changing formation to a back three.

The swirling Storm Arwen winds made free-flowing football difficult as high-quality chances were at a premium in the first half - with the opening stages in stark contrast to the two goals inside three minutes in last season's corresponding fixture.

Coventry striker Godden had the game's first close call as Kane's centre was flicked tamely and easily defended in the 10th minute.

Five minutes later, Lewis Cook fired a weak effort from 25 yards straight at Simon Moore, something Ryan Christie replicated later in the half.

Just as the half appeared to be petering to a goalless conclusion, Anthony got his helping hand from the conditions.

The 21-year-old cut in off the left flank and aimed an in-swinging cross to Dominic Solanke, but the ball evaded the striker and keeper Moore before hugging the inside netting.

The second half began similarly to the first, but in the 61st minute, Billing rounded Moore after a slightly overhit through ball from Lewis Cook before the angle narrowed and he could only squeeze into the side netting.

The second goal came in the 66th minute. This time Anthony's cross met its intended target, with Billing getting a toe in front of the keeper - the midfielder's eighth goal of the campaign.

Lerma had been impressing in his shift from midfield to centre-back before a loose Jack Stacey pass put him under pressure and a poor touch left him to scythe down Godden and see red.

Anthony, now on the right wing, demonstrated his trickery and then dinked to Solanke at the back post only for Kyle McFadzean to block the downward header on the line.

The Sky Blues set up a frantic finale when Godden reacted quickest with a strong finish in a congested penalty area after Liam Kelly's cross was not dealt with.

Kane, though, sent the travelling fans into raptures by firing over Travers from the right side of the area deep in stoppage time.

Bournemouth's Scott Parker: "The red card definitely changes the game. There isn't much I can say apart from how devastated I am for the team because for 70 minutes we were in control. With 11 men we dominated the game in every aspect of our play and then the sending-off changes it a lot and we haven't managed to hold on. I'm gutted for the players. Football has a habit of kicking you in the bits where you don't want it and today that happened for us.

"If we were sitting here with us having 11 men we would be marvelling at how well the team did. It will be difficult to get the lads back but we are hurting. There isn't much I can say to the team other than telling them to relax and not dwell on it tomorrow."

Coventry's Mark Robins: "I thought it was a good game. They are brilliant and you have to be really careful. The sending-off was a turning point. When it happened it just made things a little clearer in terms of how we could attack them and get back into the game.