Bournemouth 0-0 Middlesbrough: Goalless at the Vitality

Report and free match highlights from the Sky Bet Championship clash between Bournemouth and Middlesbrough at the Vitality Stadium as the two promotion-chasing sides played out a goalless draw on Friday afternoon. 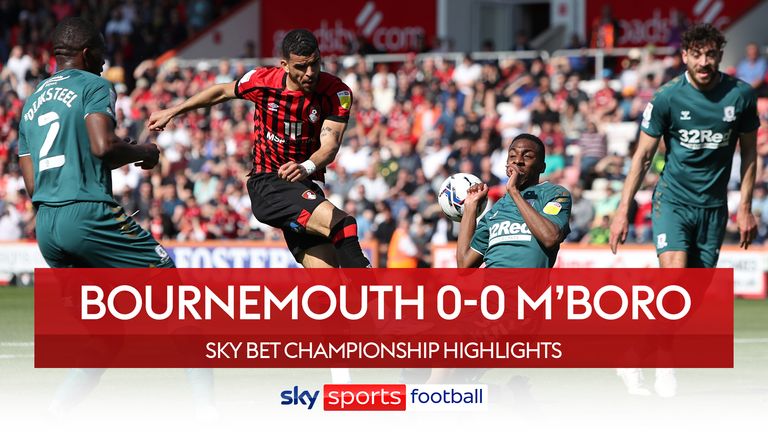 Highlights from the Sky Bet Championship match between Bournemouth and Middlesbrough.

The shot-shy Cherries missed the chance to put clear daylight between them and the chasing pack and have now taken just two points from their last three outings.

But neither Daniels nor opposite number Mark Travers were seriously tested for much of a first half lacking in attacking quality.

Bournemouth midfielder Todd Cantwell flashed a dangerous free-kick into the penalty area in the 16th minute but defender Nat Phillips narrowly failed to connect with an attempted diving header.

Boro then had two penalty appeals waved away by referee Tim Robinson in the space of a minute.

First, Adam Smith appeared to block a Jones cross with his outstretched arm and then Phillips looked to have played the ball against his own hand after mis-controlling it.

It took until the final minute of the half for the first attempt on target and it came from the visitors.

Marcus Tavernier found himself in space 30 yards from goal before rolling a pass into the feet of Duncan Watmore and his well-struck shot was pushed away by Travers.

The home side came close to breaking the deadlock nine minutes before half-time when Philip Billing fired a 25-yard free-kick just over the crossbar.

Bournemouth were buoyed by promotion rivals Nottingham Forest losing 1-0 at Luton earlier in the day.

But it was Boro who started the second half looking more likely to open the scoring, with Tavernier flashing a header wide from Marc Bola's hanging cross.

Bournemouth thought they had taken the lead when Jefferson Lerma met Cantwell's 58th-minute corner with a thumping header only to be denied by the underside of the crossbar.

The Cherries had another opportunity from the rebound, but Danish international Billing could not keep his volley down.

The pair combined in the 77th minute when Anthony floated in a teasing left-wing cross but the rising Lowe could only head high over the crossbar.

Anthony also curled a shot into the arms of the under-worked Daniels with Bournemouth's first shot on target six minutes from time.

The final whistle was met with jeers from the home fans as their Boro counterparts celebrated a hard-fought point.

Bournemouth's Scott Parker: "I think that's a big point, that's how I see it. Of course we wanted all three points but Boro are a well-organised team and we knew they would be hard to play against. We had a couple of little half chances and Jefferson hit the bar and did not follow the ball in. Those are the fine margins we are working with but every game we play is another one ticked off. I think that's a point gained.

"I was pleased with the second half and saw a group of men trying to win the game. They limited us to very few opportunities and I always felt the game would be tight. We are in a fantastic place with six games to go and we would not want it any other way. I understand the anxiousness and the desperation of everyone wanting to get this season done and dusted and for us to get promoted. We need to stay focused and very calm. We will be alright."

"I believe that they will succeed in getting into the Premier League and for us to haul ourselves in and around the top six, which we are. That's the aim. There's a lot of football between now and the end of the season. I haven't got a crystal ball - who knows what it's going to take? We've played the two best teams in the division, Fulham and Bournemouth, in the space of 10 days. They are both really good sides and the performance levels have been good."