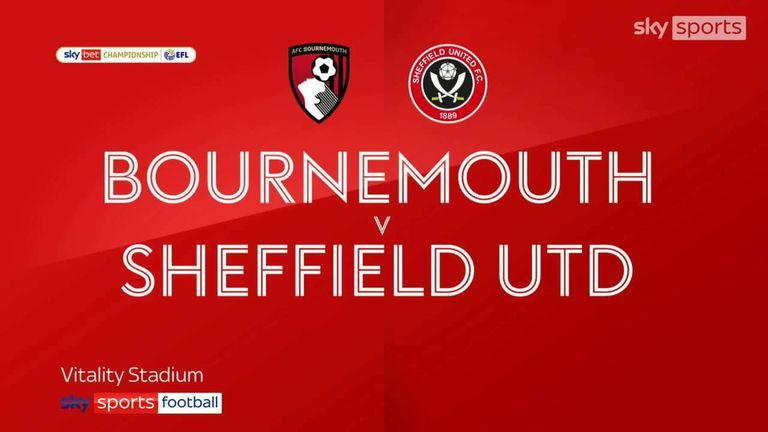 Highlights of the Sky Bet Championship match between Bournemouth and Sheffield United.

Philip Billing was the match-winner as Bournemouth came from behind to beat Sheffield United 2-1 and claim top spot.

The Cherries' status as the last remaining EFL team yet to taste defeat looked under threat when Morgan Gibbs-White gave United the lead 11 minutes into the second half.

But Scott Parker's side hit back with two goals in the space of four minutes - a controversially-awarded Dominic Solanke penalty followed by Billing's strike which snatched victory.

United had taken just four points from their first five away games but had the better of a first half played in torrential rain.

With only two minutes played Ben Osborn tested the reactions of Bournemouth goalkeeper Mark Travers with a cross-cum-shot which the Irishman did well to turn behind for a corner.

Olsen then had a let-off after playing a clearance straight to Billing, but the Denmark midfielder put a tame shot straight into the relieved goalkeeper's arms.

Billy Sharpe had two opportunities to work Travers but the veteran hitman was in an unusually forgiving mood.

First in the 28th minute, Osborn fizzed in a teasing cross, but Sharpe lifted his shot high over the crossbar from close range.

Then seven minutes later, Sharpe seized on a poor touch from Lloyd Kelly inside his own penalty area but again failed to hit the target.

Arguably the visitors' best chance came six minutes before the break when Oliver Norwood's corner found its way to Ben Davies at the far post, but he headed over.

Solanke should have put Bournemouth in front within two minutes of the re-start.

Jordan Zemura got in behind the United defence before putting it on a plate for Solanke whose weak initial shot was blocked by Enda Stevens before Olsen saved the striker's tame rebound effort.

Solanke's misery was compounded when Gibbs-White fired the visitors in front in the 56th minute.

Sharpe outmuscled Zemura before cutting the ball back for Gibbs-White to slide in and score.

Bournemouth were gifted the chance to level six minutes later when Stevens was adjudged to have brought down Solanke.

United were adamant the tackle took place outside the box but Solanke ignored their appeals to rifle home from 12 yards.

The game was turned on its head three minutes later as Billing calmly side-footed Bournemouth into the lead from 12 yards after being teed up by Ryan Christie.

Zemura could have put the game to bed 11 minutes from time after racing on to Solanke's clever back-heel but shot into the side netting.

Bournemouth's Scott Parker: "I have been here now for three months and every day I am learning something different. We had a bit of adversity today. That was the first time we have been behind this season but the reaction of the players to that pleased me greatly. After we scored the penalty, I saw a group of men wanting to grab the ball, put it in the centre-circle and go and win.

"We are going to need that mindset and that mentality throughout the year as we will go behind many times in the future. We are top of the table, undefeated, but we realise there is a lot of football to play. At the end we had to defend and grind it out. The players really at that point stood up and we managed to see out the game."

Sheffield United's Slavisa Jokanovic: "I am simply not blind. It was two joke decisions for both goals. I saw on the field that the challenge was outside the box and have seen it on TV since. The second goal was clearly offside. The officials put Bournemouth back in the game, it is as simple as this. If you ask me what I think, this is expensive. I'm not an average guy.

"Both teams worked hard. It was a quick pitch and we did not connect a lot in the middle. Bournemouth tried, like us, to exchange a few passes. They pressed us a lot in the first 45 minutes and we had a problem with the build-up. They had the same problem. At the end of the day my team played better than Bournemouth, who are one of the best teams in the Championship."