Report and highlights from the Sky Bet Championship play-off semi-final second leg between Brentford and Bournemouth at the Brentford Community Stadium as goals from Ivan Toney, Vitaly Janelt and Marcus Forss sent Thomas Frank's team to the play-off final Brentford are through to the Sky Bet Championship play-off final after they came from behind to beat 10-man Bournemouth 3-1 in a thrilling second leg at the Brentford Community Stadium.

Trailing 1-0 on aggregate after Monday's first leg at the Vitality Stadium, the Bees suffered an early blow when Arnaut Danjuma rolled home in the fifth minute but pulled level when Ivan Toney converted from the spot 11 minutes later after Lloyd Kelly's handball.

The Cherries were then reduced to 10 men when former Bees defender Chris Mepham was sent off after he pulled Bryan Mbeumo to the deck in the 28th minute, before Vitaly Janelt added a spectacular second for the hosts five minutes after the break.

Brentford's comeback was completed with nine minutes left to play, when substitute Marcus Forss' beat goalkeeper Asmir Begovic with a predatory finish inside the six-yard box to send the Bees to Wembley, where they will face Swansea on Saturday, May 29.

As a 4,000 strong crowd piled into the Bees' new home for just the third time this season, an electric atmosphere was generated in the build-up to kick-off and the players responded in kind with a spectacle on the pitch.

With five minutes on the clock, Bournemouth took the lead and doubled their aggregate advantage. The hosts only had themselves to blame, as the backline piled forward to attack a Bryan Mbeumo corner, leaving Danjuma free to charge forward on the counter, escape the clutches of Mathias Jensen and roll beyond David Raya.

Before the game could get away from Brentford, though, they pulled level as Toney tucked away his cool trademark penalty after Emiliano Marcondes' cross had struck the outstretched arm of Cherries defender Kelly. An altercation between the striker and Begovic then brought bookings for the pair.

The drama continued with 28 minutes gone, as the visitors were reduced to 10 men after Mepham was shown a straight red card. He struggled to control the ball under pressure from Mbeumo and once the Frenchman had bypassed him, the former Brentford defender scrambled, caught him on the ankles and was dismissed by referee Jarred Gillett.

Thomas Frank's team spurned two glorious chances to capitalise as Toney misjudged a Sergi Canos cross from two yards out, before Henrik Dalsgaard's header was hooked off the line by substitute Diego Rico, but five minutes after the break, Janelt seized on a poor clearance to curl a beautiful effort into the top left corner.

While it was one-way traffic for the Bees thereafter, the openings they created seldom hurt their opponents. Toney sent a volley flying into the West Stand and then sent a header a way off target, while Marcondes stung Begovic's palms with a curling effort from 20 yards.

But with less than 10 minutes to play, Forss connected with a square ball and sent a shot looping over Begovic and into the back of the net to ensure the Bees reached the Championship play-off final for a second season running. 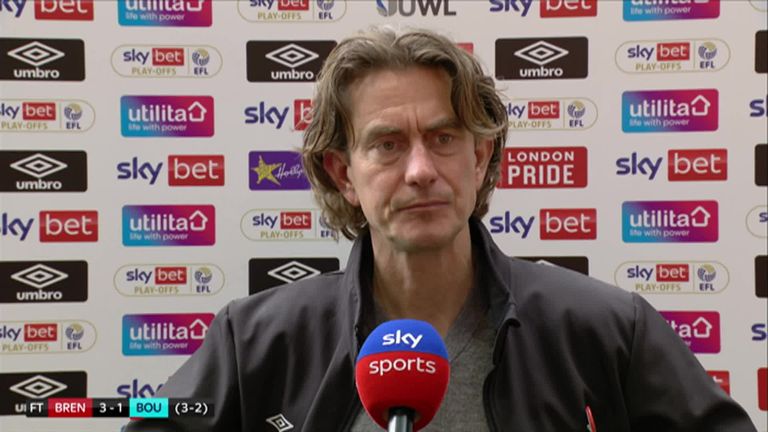 Thomas Frank paid tribute to the Brentford fans after their ‘crazy’ match against Bournemouth, and the Bees boss says his side fully deserved their victory

Brentford's Thomas Frank: "This is what sport and especially football are capable of doing. The emotions inside my body are crazy. For the fans, for everyone involved, it was an insane game, crazy.

"If I have to praise someone for us, it has to be the fans. What an atmosphere! Unbelievable. 4,000? It sounded like 40,000. Before the game, I talked about needing a top performance and the fans gave us a top performance. After a minor mistake, we grew into it and I think we fully deserved to win the game.

"Of course, there are some key situations that went our way, we can't hide from that. But for me, the penalty was clear, the red card was clear. The only thing I would say we were a bit fortunate with was Vitaly's [Janelt] goal, but the pressure we built on Bournemouth from the red card to the end and the amount of chances we scored, I think we were just to score another one.

"I will make sure we are 100 per cent prepared [for the final] like we were for these two semi-finals. We will come out flying, we will give everything and hopefully, that will be enough." 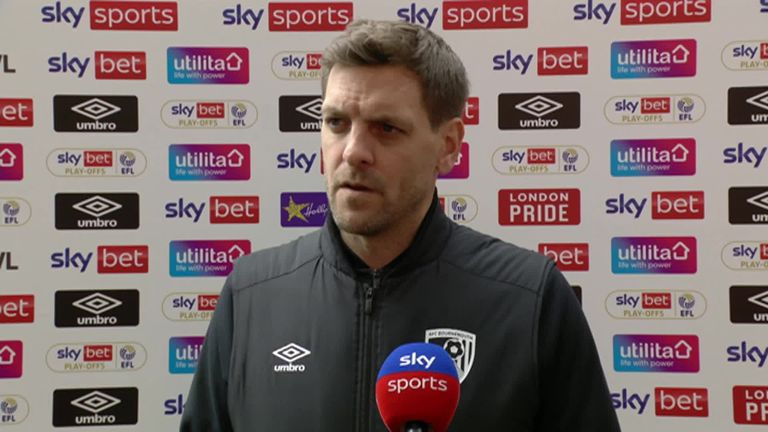 Jonathan Woodgate says the Brentford fans were constantly pressuring referee Jarred Gillett in their play-off defeat and that was why they were awarded a penalty for handball.

Bournemouth's Jonathan Woodgate: "I'm absolutely devastated, to be honest, the players are as well. But I can't for the life of me see how he's given a penalty - it hit his thigh then his hand. I thought the fans got on top of the referee, and their coaching staff did. Honestly, it's beyond me how he gives it.

"That changes the game, then we make an error with the red card and it's difficult enough playing here with 11 men, let alone 10 men. It's been a crazy few months. At the end of the day, it [extending his contract] is not my decision."

Analysis: A great day for Brentford, one to forget for Bournemouth

"It's important to savour that moment together for Brentford, especially after overcoming the disappointment from the first leg. They'll have a mini celebration, but from tomorrow it will be all eyes on the final.

"It's all well and good being the favourites, but if they let themselves down on the day it doesn't matter. But they'll back themselves with the confidence of people like Ivan Toney, and a belief that, having overcome this hurdle, that the only way is up for them."

"It's been a great game. There were mistakes, good goals, incidents, goalkeepers flying out, a 'keeper getting caught offside! It was such an entertaining match.

"But everything that could have gone wrong for Bournemouth went wrong. The penalty was unfortunate, Mepham getting sent off, the block tackle that ended up in the back of the net.

"It was a day to forget for them."

Brentford progress to the Sky Bet Championship play-off final, which takes place at Wembley on Saturday, May 29 at 3pm, while Bournemouth will remain in the division for the 2021/22 season, which begins on Saturday, August 7.