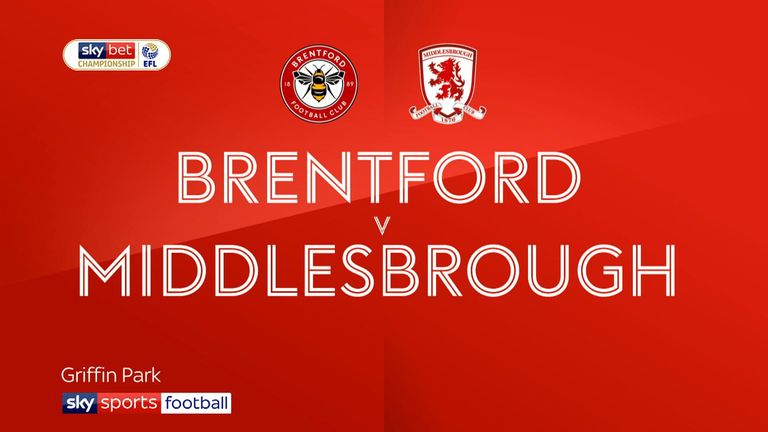 Highlights of the Sky Bet Championship match between Brentford and Middlesbrough.

Middlesbrough survived a late scare to beat Brentford 2-1 and move up to second in the Championship table on Saturday evening.

After a tightly-contested first half, it took Jordan Hugill 11 minutes to break the deadlock after Jonny Howson had poked the ball to him at the far post (56).

Man of the match: Adam Clayton

Largely thanks to Darren Randolph that hope was soon dashed, restoring Boro to the automatic promotion places and leaving Thomas Frank's ailing side languishing in 15th.

Brentford's aerial struggles had been recently noted as a factor in their slide to the bottom half of the table and Tony Pulis' side set about exploiting their defensive weaknesses from the first whistle.

Aden Flint spooned an effort over the bar from an early corner and George Friend - donning a protective facial mask - delivered a number of crosses that seemed to cause panic in the hosts' back line.

On the half hour, Moses Odubajo was denied the opener from the most viable chance of the half as his curling effort was tipped over by Randolph following his one-two with Neal Maupay.

The openness of the first half carried over into the second, but Middlesbrough finally nosed in front when Howson got the vital touch on Mo Besic's lofted pass, squaring for Hugill to sidefoot into the empty net.

Boro's desire to punish their opponents at set-pieces eventually came to fruition just after the hour when Dael Fry intercepted a short throw and swung a corner from the right touchline, allowing Tavernier to glance over the line on his first start under Tony Pulis.

Tony Pulis made just the one alteration to his Boro side as Marcus Tavernier started ahead of Martin Braithwaite.

Pulis was left positively seething with 15 minutes to play when Judge drove a shot through a crowd of bodies to reduce the deficit, and while Maupay, Josh Dasilva and Sergi Canos were presented with gilt-edged chances in the dying embers, none of the trio could convert as they fell to a fifth defeat in six under Frank's leadership.

Man of the match - Adam Clayton

An eternal thorn in the side for Brentford on Saturday evening, Clayton put in a rugged, hard-working display in west London to keep the hosts from being able to test the Boro backline, often limiting them to chances from deep.

Completed 2️⃣6️⃣ of 3️⃣3️⃣ passes 👍
5️⃣9️⃣ Touches - 2nd most for Boro 👏
6️⃣ Tackles - most in game 🙌
3️⃣ Interceptions - most for Boro pic.twitter.com/OqtrmswO5E

Thomas Frank: "It was a tight game, an even game throughout the 90 minutes. Especially until the goal, I think we'd been in a game where we were dominating on the ball, trying to find a solution to break through the Middlesbrough defence. 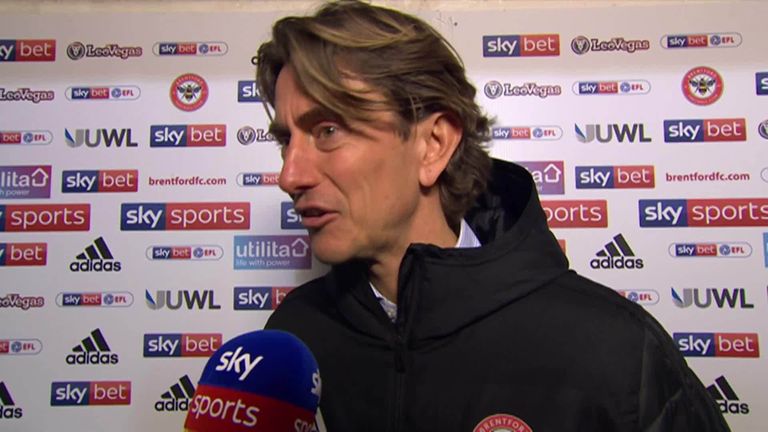 Brentford boss Thomas Frank says their match with Middlesbrough was a tight one and feels that the Bees were unlucky to lose.

"We started the second half quite well, getting closer and closer to the bigger chances and then a little bit out of nowhere, they get a big chance and score. We need to do what we believe we have done well throughout the season, we can't not trust that. We need to do better."

Tony Pulis: "It was a hard-fought game. They are a very good footballing side, but I thought we created the better chances and again, we should be scoring at least four goals. If you have a look at the chances, we should have four goals not two and that's been a little bit of a problem but you can never fault the players and the effort they give. 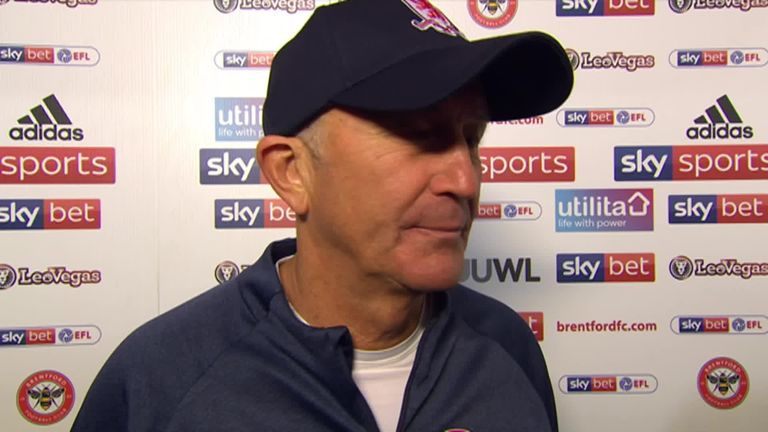 Tony Pulis says he was delighted with his players' effort and performance but insists his Middlesbrough side should of scored more than the two they managed in their win at Brentford.

"I think it's down to confidence as much as anything else. Wingy [Lewis Wing] comes on and he's probably as good a finisher as you've seen and as soon as the ball goes to him, you think it's going to hit the back of the net. We're pleased with the three points, delighted, because they are a good team."

Both sides are next in action on Tuesday evening in the final round of midweek fixtures in 2018. Brentford play at Griffin Park for the second game in succession as they host Sheffield United, while Boro travel to Deepdale to face Preston. Both games are available to view on Sky Sports Football via the red button.