Report and highlights from the Sky Bet Championship play-off final between Brentford and Swansea at Wembley as the Bees ended their 74-year wait for top-flight football thanks to goals from Ivan Toney and Emiliano Marcondes. 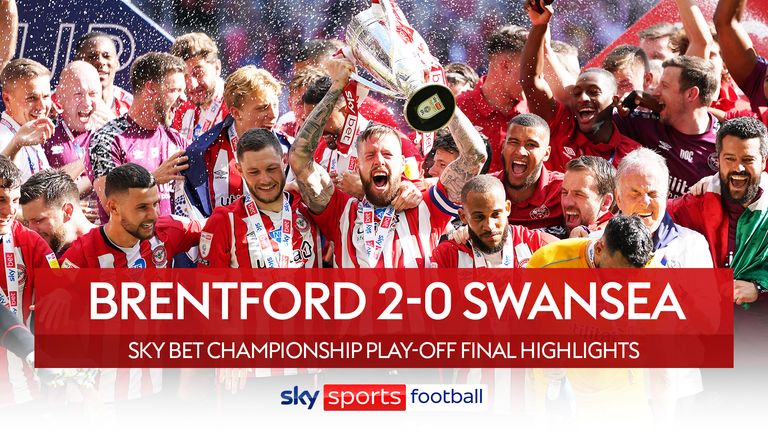 Highlights of the Sky Bet Championship play-off final between Brentford and Swansea City.

Brentford will play in the top flight next season for the first time in 74 years after beating Swansea 2-0 in the Championship play-off final.

Nine times Brentford had been involved in the play-offs in their history and failed to progress, but it was 10th-time lucky for the Bees, as they also banished the demons of last year's final defeat to Fulham.

Ivan Toney's penalty and Emiliano Marcondes set them on their way with first-half goals at Wembley, to take the west London club back to the promised land for the first time since 1947.

For Swansea, it's a second defeat in the play-offs in a row, having also been beaten by Brentford in last year's semi-finals. Insult was added to injury for them in the second half as Jay Fulton was sent off, too, as they ended the game with 10 men. They will roll on into a fourth campaign in the Championship next season.

Brentford blow Swansea away at Wembley

It was a ferocious opening from Brentford, playing with the kind of intensity rarely seen in the opening minutes of what is usually the most nerve-racking game in the football calendar. And nerves clearly got the better of Freddie Woodman as he rushed off his line to bring down Bryan Mbeumo - allowing Toney to open the scoring with his usual composure from the penalty spot after just 10 minutes.

After 20 minutes, they doubled their lead. This one came from a lightning counter-attack following a Swansea corner as Mbeumo raced half the length of the pitch before finding Mads Roerslev, and he pulled the ball back for Marcondes to fire in.

Swansea were shell-shocked, and a minute after the second it would have been game over had Toney's thunderous effort from 20 yards struck the crossbar and gone in, rather than bounce just in front of the line and clear.

They did go close to getting a goal back within two minutes of the restart, however, as a brilliant cross from Connor Roberts found Andre Ayew, who darted between the centre-backs but somehow managed to head wide.

Any hopes of a comeback were quelled in the 65th minute when Fulton was dismissed after a poor challenge on Mathias Jensen, to leave the Swans dejected and the Bees in dreamland. 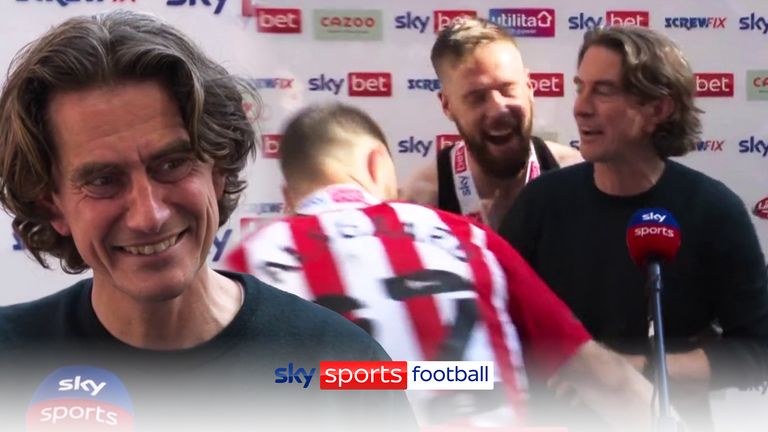 Thomas Frank described himself as proud after Brentford achieved promotion to the Premier League and he felt they deserved their success as they beat Swansea in the Championship play-off final.

Brentford's Thomas Frank: "I'm completely empty right now. I don't know if I can describe it. It's been such a long journey. There's been ups and downs...

"This group of players is incredible. Everyone has played a major part in this. Somebody said to me that we need two hands and 10 fingers to lift the trophy and we have done it on our 10th attempt. The feeling was calm and relaxed and ready to be ruthless. We didn't talk about last year. We focused on this.

"Right now, I want to get drunk and then worry about the Premier League tomorrow!" 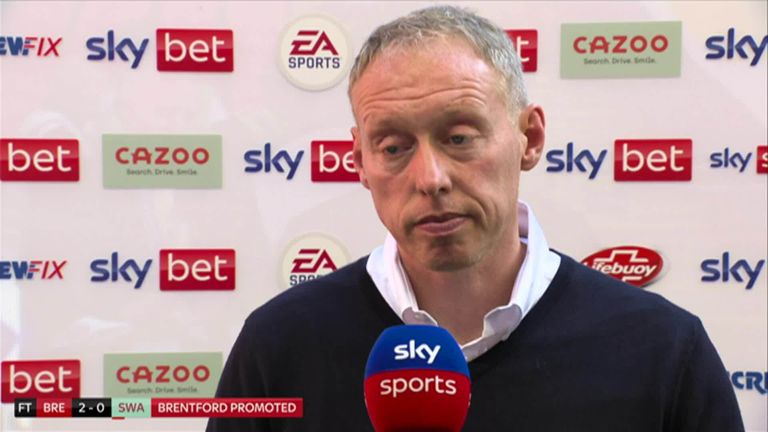 Steve Cooper felt Swansea gifted Brentford their two early goals and that ultimately cost them as they lost 2-0 in the Championship play-off final.

Swansea's Steve Cooper: "It's a cup final, you want to win. One team wins, one team doesn't and, unfortunately, we were the latter. I think we gave ourselves too much to do; we didn't start the game well, but when you do that, you can't give away goals like we did. It ended up becoming the defining moment for the result.

"We didn't give up and you could see the response from going 2-0 down was a positive one. I know we didn't get too many threats on goal, but we looked to push. We started the second half really well and if Andre had got on the end of that [chance] who knows? And then the red card. I'm not sure whether it is a red card or not, but there's no way he has tried it and it has been an even bigger mountain to climb."

"I think they have [got that added X-factor] and if you look at that game and take Ivan Toney out of that Brentford team and put him in the Swansea team it may well have been a more even game. Likewise, Ethan Pinnock, who was magnificent for Brentford.

"But, with respect to Swansea, Brentford had more collective star quality than Swansea did. I said before kick-off that for Swansea to be here was a remarkable effort on their part, but Brentford are one of those teams that you can't help but admire and you can't help but love the way they play.

"They get on the front foot, they want to attack, they are the top scorers in the last two seasons and I thought they were unlucky not to go up last season, if I am being honest, but to then get over that heartbreak against Fulham, it takes enormous character. That togetherness that Ivan Toney was talking about is clear for everyone to see."

"Swansea have got a wonderful coach there and I don't think it'll be long before he ends up in the Premier League anyway. Swansea will hope it will be with them but in order for that to happen I just think he will need a little more financial support and a little bit more backing. He hasn't really had any funds to work with.

"All in all, we talked at the top about this being a massive overachievement. I don't think anyone from Swansea should be ashamed but they should be proud of what they've done over the last two seasons with the manager almost having to do the job with one arm tied behind his back because of the financial constraints Swansea find themselves in.

"So, my hope for Swansea is that they can support Steve Cooper a little bit more in the transfer market, knowing they've got a top coach who knows what it takes to get at least this far, and he's probably learned what it takes to go that next yard."

Man of the Match: Emiliano Marcondes 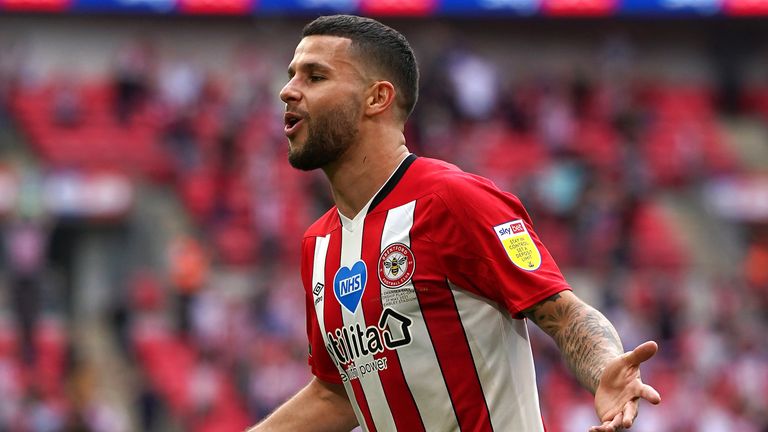 He's not always been a regular for Brentford, but Emiliano Marcondes has had a knack for turning up in big moments, and he did just that at Wembley.

His finish for the second goal was first class, and the most important moment in the game. From the second it hit the back of the net there was no way back for Swansea.