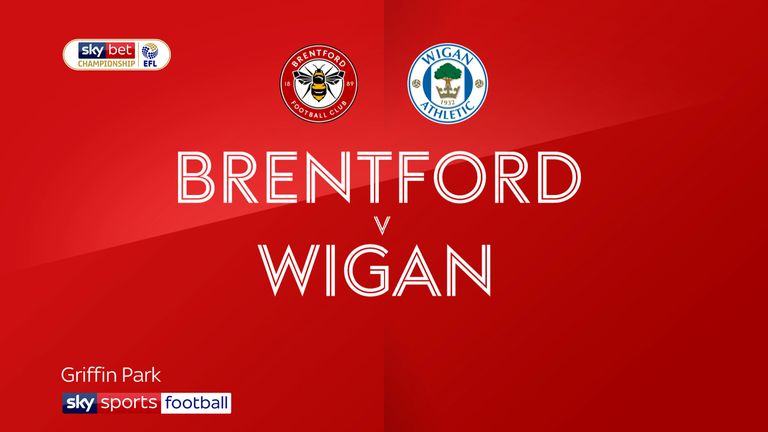 Said Benrahma grabbed a hat-trick as Brentford kept up their bid for automatic promotion with a 3-0 victory over crisis club Wigan.

Benrahma's sparkling treble ensured the Bees are still breathing down the necks of the top two, having moved to within two points of second-placed West Brom.

That they were made to work relatively hard for almost an hour before securing a fifth straight win was a testament to Wigan, whose players and manager Paul Cook were reeling from their shock slide into administration on Wednesday.

The alarming development came little more than a month after the Latics, a Premier League side and FA Cup winners just seven years ago, were taken over by the Hong Kong-based Next Leader Fund.

It meant Wigan arrived in west London having gone from the the Championship's in-form side to effectively bottom of the table, the 12-point deduction they will receive undoing all the good work of a remarkable run of six wins out of seven.

They had not even conceded a goal during that time, and keeper David Marshall went some way to illustrating why in the opening moments.

Marshall beat away Henrik Dalsgaard's drive at his near post before Ethan Pinnock squared the loose ball to Ollie Watkins.

Watkins was convinced his shot was blocked by Cedric Kipre's arm, but no penalty was given and Marshall made a stunning point-blank save as Bryan Mbeumo put his foot through the rebound.

However, Marshall was beaten for the first time in 684 minutes when Emiliano Marcondes headed a half-cleared Watkins cross down for Benrahma to slot home from 15 yards.

Shandon Baptiste almost made it two when he rounded Marshall but he scuffed his shot and Kai Naismith was able to clear.

After the break Marshall made a brave, and painful, save to prevent Watkins from converting Dalsgaard's cross, colliding with the striker in the process.

But in the 57th minute Benrahma doubled the lead with what was either a stunning, looping shot or a hopeful cross, which flew straight over Marshall into the net.

Watkins, the Sky Bet Championship's joint top goalscorer, was denied again from close range by Marshall before Benrahma completed his treble when he swept in Christian Norgaard's pass.

By now Wigan's heads had dropped and they lost Joe Garner to a late red card for a high tackle on Jan Zamburek to cap off a miserable end to a torrid week.

Brentford's Thomas Frank: "I think in general [Benrahma] has had a good season so far but he has absolutely hit the ground running after this coronavirus break. He has added extra to his game, such as arriving in the box, and these last four games he has been getting better and better, with his passing and his finishing.

"I have to praise him for his work ethic. He worked extremely hard. He has been good, he needs to keep it up. Three goals a game would be good!"

Wigan's Paul Cook: "As you can imagine, today was a tough day for us. Travelling down with everything that's going on, we're aware of everything with all of the positive energy at the club.

"The one thing we can all guarantee to the supporters is that we will not be lying down and fading away. At the moment there's a realistic chance that we can stay in the league.

"My message from the game itself is that we had a bad day today. It was a flat performance and disappointing, but credit to Brentford because they're a really good side. We'll pick ourselves up for the last five games and we'll do our best to make you proud of us."