Free highlights and match report as Crystal Palace and Burnley play out an end-to-end contest; Christian Benteke scored before and after goals from Ben Mee and Chris Wood; Marc Guehi and Maxwel Cornet also got on the scoresheet; Burnley remain in the relegation zone 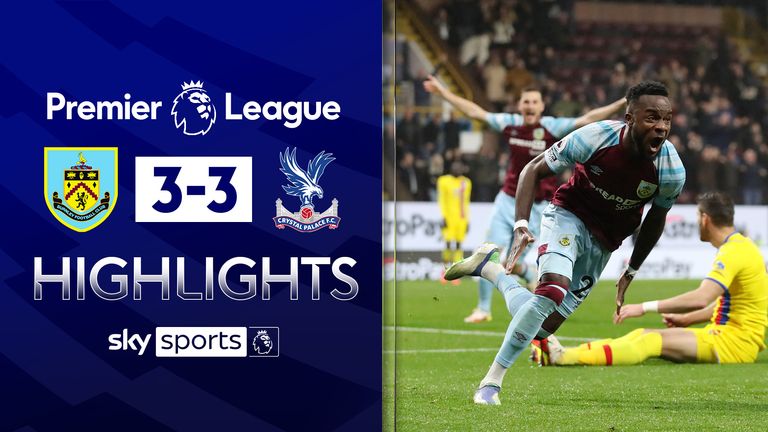 FREE TO WATCH: Highlights from Burnley's match with Crystal Palace in the Premier League

Christian Benteke scored twice and Maxwel Cornet produced a stunning volley as Crystal Palace and Burnley played out a 3-3 draw in a thrilling clash in wet and windy conditions at Turf Moor.

Benteke led the Palace response with his second goal in the 36th minute before Marc Guehi scored his first senior goal on the stroke of half-time (42).

But Cornet would get his fifth Clarets goal on his sixth Premier League start with a spectacular volley into the top corner to make it 3-3 (49). Substitute Matej Vydra had a chance to win it for Burnley deep into injury-time, but his scuffed attempt in a one-on-one was brilliantly stopped by Vicente Guaita.

"It was a crazy good game," Patrick Vieira said post-match.

"Both teams maybe brought a different philosophy to the game but both tried to win it. I think for the neutral it was a good game to watch."

Man of the match: Christian Benteke

Burnley and Palace produce a goal-fest

Palace had only scored two first-half goals this season before this encounter. The visitors took the lead through Benteke, whose shot took a heavy deflection off James Tarkowski and crept in off the post.

Mee responded for Burnley in the 19th minute, rising above Cheikhou Kouyate to thump home a header that clattered in off the post.

Although Palace kept pushing men up the pitch, Wood put Burnley in front. The New Zealand international scored his 50th Premier League goal with a glancing header into the bottom corner. Benteke grabbed another nine minutes later, tucking away a first-time shot on the counter-attack following some excellent close control by Conor Gallagher.

Three minutes before the break Palace regained the lead through Guehi as Burnley's naive defending continued. A blocked shot on the line fell to the 21-year-old, who blasted in the rebound.

Cornet has been arguably the brightest light for Burnley in a gloomy season so far and he showed his worth to Sean Dyche's side again with a fantastic strike in the 49th minute, volleying beyond a helpless Guaita into the bottom corner.

The second half was less eventful than the first, but Burnley did have a case for a Palace red card after an isolated Joachim Andersen pulled down Wood on the edge of the box which VAR deemed did not merit any punishment.

"I'm all for allowing some of these soft things, it's trying to find the balance, but that's bizarre," Dyche said of the challenge on Wood.

"He's got two hands around his chest. Whoever's looking at that, I've no clue how they've not given it."

Vydra could have won it in the final seconds when he latched onto a long ball over the top of the Burnley back-line, but he was denied by an outstretched right arm from Guaita.

Burnley manager Sean Dyche: "[Not sending Andersen off] was ridiculous. Wood is going through but somehow they think he just fell on the floor. It's a mixed bag from the referees this season but the fact that doesn't get given is bizarre to me.

"We've had one loss in seven and had a lot of draws but there's plenty of belief in what we're doing so I'm really pleased with the result."

Crystal Palace manager Patrick Vieira: "It is not easy to go 2-1 down and then go 3-2 up. We showed character and personality. We created chances and at times we didn't make the best decisions to be more effective. We are improving, getting better but we are quite happy to go back with a point.

"The save from Guaita was important for us not to lose that game. The referee had a tough game and at the end he made the right decision. Both managers can complain at the referee but I thought he was fair to both sides.

"We want to win football matches but we leave with a point from a difficult place."

Analysis: Palace has a set-piece problem

Vieira expressed his disappointment at his side's inability to defend Burnley's set-pieces and he has a point with the hosts twice thriving off defensive lapses in concentration from Palace.

He said: "Burnley are really strong physically and at set-pieces they are a danger. I thought overall we managed it well, but that is a big part of the game we need to improve."

Burnley were perhaps unlucky not to win the game in the end. For Palace, being more effective at clearing set-pieces may have seen them win the game and their defensive naivety resulted in a missed opportunity to move up into sixth in the Premier League table.