Highlights from Brighton's win over Crystal Palace in the Premier League.

Glenn Murray, who was only playing after Florin Andone was injured in the warm-up, opened the scoring after 19 minutes with his now customary goal against his former club.

The home team levelled matters five minutes into the second half after Davy Propper tripped Andros Townsend in the box, with Luka Milivojevic doing the rest from the spot.

Man of the match: Lewis Dunk

However, Knockaert's breathtaking effort - just his second league goal of the season - won it for Brighton with 16 minutes to go.

The clash between these two fierce rivals got off to a predictably feisty start when Knockaert was lucky to only be cautioned for cleaning out Palace captain Milivojevic after just 28 seconds, the quickest Premier League booking of the season.

That early tackle set the tone for the first 45 minutes, a half in which there were few clear-cut openings, but one which saw the visitors go in ahead at the break.

Murray still had a lot of work to do, though, to beat Vicente Guaita from a tight angle, however, the striker did brilliantly to find the far corner of the net for his 100th league goal for Brighton.

Palace, who no doubt felt a tad aggrieved to be behind at half-time, stepped up the pace in the second half and were soon back on level terms, albeit with a helping hand from their opponents.

Townsend embarked on one of his trademark dribbles that took the forward into the box, only for Propper to dangle out a leg and upend the player, with referee Craig Pawson wasting no time in pointing to the spot.

Milivojevic coolly stepped up to convert his eighth successful spot-kick in the top flight this season, but rather than be a springboard for a Palace win, it was the visitors who struck next.

Brighton boss Chris Hughton was preparing to bring Knockaert off, but before the substitution could be made, the Frenchman put his team back ahead with a goal-of-the-season contender.

The winger picked up possession down the right, before cutting inside and curling a sublime left-footed shot into the top corner of the net as Brighton scored from outside the area for the first time in the league this season.

Palace made three changes to the side that beat Burnley 3-1 last weekend, with Vicente Guaita, Andros Townsend and James McArthur all recalled.

Brighton had intended to make one change from last weekend's win over Huddersfield. However, Florin Andone's injury in the warmup meant a reprieve for Glenn Murray.

And it was a fitting way to take the spoils in a match of this importance.

Aaron Wan-Bissaka is a hot contender to be in the the England squad and he produced an energetic display, keeping Alireza Jahanbakhsh quiet throughout the game and made some smart runs down the flank.

Lewis Dunk grabbed his first England cap back in November and will surely be in Southgate’s mind again after his Man of the Match display.

His goal-saving blocks highlighted his determination to keep Brighton in the game in critical high-pressure moments. 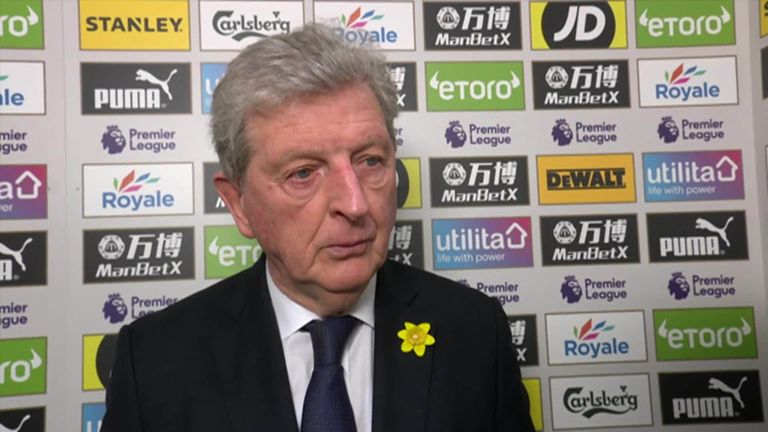 Crystal Palace manager Roy Hodgson claimed he was disappointed with the lack of chances his side created despite dominating possession in the 2-1 defeat to Brighton.

Roy Hodgson: "It's a déjà vu situation with the games like we played here and not won - either losing by the odd goal or drawing.

"It's not because the team have been outplayed or come across an opponent who has been too good for us. It's because we've not been able to turn goalscoring opportunities into goals." 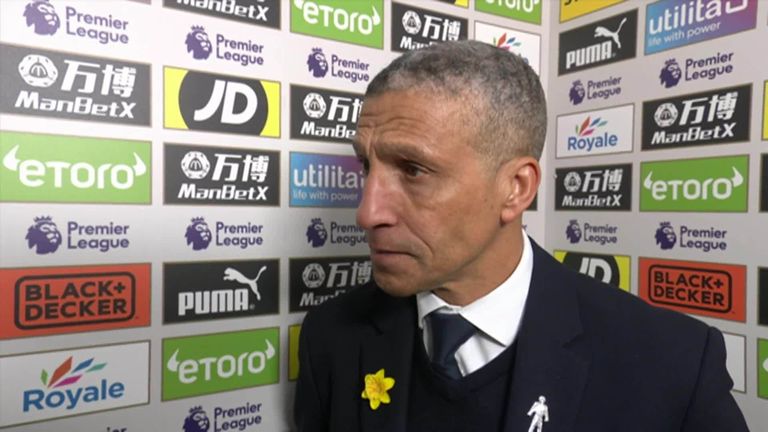 Chris Hughton was delighted with the way his Brighton side managed the game against Crystal Palace in their 2-1 away win at Selhurst Park.

Chris Hughton: "I always maintained 40 points is the easiest and obvious one to look for. It's something to aim for and every team wants to surpass that.

"We have two wins on the spin and we've not had many back-to-back wins this season. We can try after the cup game, against Southampton, to make that three."

Man of the Match - Lewis Dunk

The centre-back was a rock-solid presence at the heart of the Brighton back line all afternoon long as the visitors returned to something approaching their defensive best.

Dunk, 27, made any number of important clearances either with his head or boot as Brighton kept Palace's dangerous forward line at bay for most of the game.

And as always, the imposing central defender was also a constant threat in the opposition box.

Palace take on Watford at Vicarage Road in the FA Cup sixth round next Saturday lunchtime, while Brighton travel to Millwall a week on Sunday as they also look to book their place in the semi-finals of the cup.