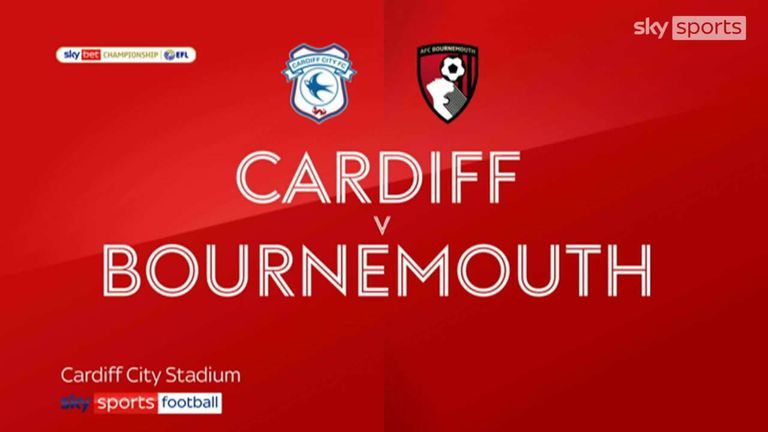 Highlights of the Sky Bet Championship match between Cardiff and Bournemouth

Bournemouth climbed to the top of the Sky Bet Championship table with a 1-0 victory over Cardiff.

Philip Billing ensured the dominant Cherries took all three points away from Wales with a strike from the edge of the 18-yard box.

The triumph saw Scott Parker's men leapfrog his former side Fulham into top spot after they made it eight games unbeaten to start the campaign.

Cardiff threatened an equaliser late on but have now suffered three defeats in their last four matches.

Parker's undefeated Bournemouth side travelled to the Welsh capital on the back of a hard-fought triumph over QPR.

The Cherries manager made a single change to his starting line-up, bringing Ben Pearson in to shore up the midfield in place of Wales international David Brooks.

Cardiff had fallen to a 1-0 defeat at Coventry last time out which prompted manager Mick McCarthy into three changes.

Both wing-backs Joel Bagan and Perry Ng were dropped in favour of Tom Sang and Ciaron Brown, while Leandro Bacuna overcame a hamstring issue to start in place of Rubin Colwill.

The visitors had to soak up some early pressure before they began to take control. Jaidon Anthony was first to trouble Dillon Phillips' goal when he rounded the Bluebirds keeper and steered an effort on target, but Marlon Pack raced back to clear the ball away.

Ryan Christie pounced on an Aden Flint error to force Phillips into a regulation save midway through the first half before he was booked for preventing a Cardiff breakaway.

Bournemouth commanded 72 per cent of possession in the first period but failed to make their dominance count as the sides headed in level at half-time.

But Parker's side made the pressure pay nine minutes into the second half through midfielder Billing.

The Denmark international had threatened the Cardiff defence from the restart when he headed over from Jordan Zemura's teasing cross.

Bournemouth's other wing-back, Adam Smith, seized the opportunity to head off on a surging run down the right before he picked out Billing for his 54th-minute strike.

The 25-year-old had the time and space on the edge of the box to look up before picking out the bottom corner with an accurate left-footed strike for his fourth goal of the season.

He almost doubled his tally for the afternoon when he pirouetted past Will Vaulks and sent a curling shot just wide of the target - when he really should have played in Christie.

Billing then stung the hands of Phillips with a whipped free-kick after Brown went in late on Jefferson Lerma.

Substitute James Collins headed over from close range as the hosts mounted a fightback, but it was too little, too late.

Cardiff's Mick McCarthy: "I've just seen the Lerma tackle and I've told the ref to have a look at it. It's a red card in my mind, he's gone over the ball and when they see that on the video they will agree with me. The referee made his decision, I'm not complaining, we all get things wrong, but it's not easy when you concede afterwards.

"They are an almost perfect Championship team, they're athletic and they have good footballers, they're big and powerful and they can play so it was always going to be a tough one for us. For 55 minutes I was delighted with how we set up to frustrate them. We blinked once, they played through us and we've been done. But in fairness to the lads, they kept going and fought until the end which I can't fault. Our only problem is that even though we managed to stop them, we created very little until the end of the game."

Bournemouth's Scott Parker: "I am delighted for Phil. We have been working hard on his game and there are unseen aspects that are now working very well. He has matured. In the past, I saw a player who could float in and out of games and maybe could go missing at times.

"Now, I think he is superb. We know what you get with him technically, but he also now ticks all the boxes when it comes to his defensive work and his understanding of the team dynamics. This was a massive result and it brought to an end a huge week for us with three wins. I thought we were superb today and looked every bit a top side. We were up against a big, physical side who deliver long throws and who can cause you massive problems. I asked my players to be brave and they were."