Celtic manager Ange Postecoglou admits the prospect of losing Odsonne Edouard for free at the end of his contract will concern the club; Postecoglou: "I think you are right in saying that is a club concern rather than my concern right now" 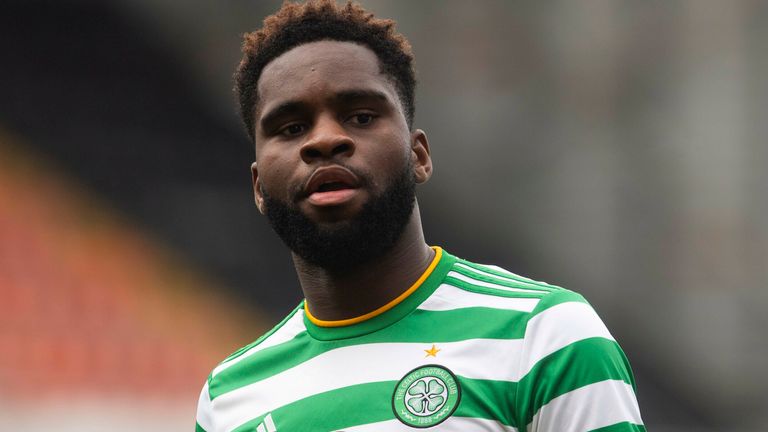 Ange Postecoglou admits the possibility of Odsonne Edouard leaving Celtic for free will concern the club.

The 23-year-old signed from Paris Saint-Germain in 2018 for a club-record £9m after an initial loan spell at the Glasgow club, and his contract is up at the end of the season.

Leicester held talks with Celtic over a deal for Edouard earlier this summer, while Brighton have also been linked with the striker, but Postecoglou is not aware of any concrete bids for the Frenchman.

Reports claim Edouard is prepared to let his contract expire, leaving him free to speak to other clubs in January, and the former Australia boss admits the prospect of losing such a valuable asset for nothing will be a worry for the club.

Ahead of the second leg of their Europa League qualifier against FK Jablonec on Thursday night, which the Hoops lead 4-2 from the first leg in the Czech Republic, Postecoglou said: "I think you are in right in saying that is a club concern rather than my concern right now.

"If it means he stays here and contributes then so be it, but again that is stuff that I am not really spending too much time thinking about.

"I have been at pains to say that there are certain things that are out of my control that I'm just not going to waste time during this period anyway, where it is really hectic, thinking about it.

"My total focus is getting the team ready for these games, playing our football which is not easy and needs a lot of attention from me and the staff, and also working on bringing players in.

"You are probably right, there is a concern there around cashing him in, but those are probably questions for other people."

Postecoglou's squad has a clean bill of health, including Edouard, who picked up a knock in a post-match training session following the 6-0 cinch Premiership win over Dundee at the weekend.

The Celtic boss, who said he was "eager to get more players in", is relaxed about the news that former Celtic boss Gordon Strachan is to re-join the club in a three-month consultancy role.

He said: "I reckon that falls into the remit of not in my world right now.

"I have met Gordon and he is a very passionate football person which I kind of like.

"The information I have had is that we are keen to tap into his knowledge of the club in terms of some of the structures around the club, particularly around the academy and women's football which I think is really important infrastructure-wise.

"But again, how much that comes on my radar at the moment, this is probably the first time I have thought about it."

Celtic Park will be full for the first time since before the pandemic for Thursday's match and Postecoglou wants his side to come out "all guns blazing".

He said: "When the whistle goes, I want to show the same intent we showed at the weekend.

"Irrespective of what the opponents may or may not come up with, it is important we set the tempo right from the start and let them adjust to us."

Callum McGregor is "absolutely buzzing" at the prospect of a full house at Celtic Park for the first time since before the pandemic.

And while he admits the pressure is "ever so slightly off", he stressed that the Hoops will not be complacent.

"We understand in football anything can happen. So we are super-focused, respectful to the opposition as we always are, we have looked at the game from last week where we can be better and hurt them again.

"So we are absolutely fully focused, no complacency whatsoever going into the game.

"We want to enjoy it, enjoy the atmosphere, give the supporters a right good performance, finish the job and get into the next round."