Report as Youri Tielemans wins Leicester their first-ever FA Cup, as Ben Chilwell's last-minute 'equaliser' is ruled out by VAR for offside in dramatic final.

Youri Tielemans struck a sensational winner to clinch Leicester City their first FA Cup in a 1-0 victory over Chelsea, in front of 21,000 fans at Wembley - with Ben Chilwell's 89th-minute effort ruled out by VAR for offside.

It was the biggest gathering of supporters inside a stadium since the coronavirus pandemic began - and they were treated to incredible drama in the 140th FA Cup final.

Leicester fans had the perfect view as Tielemans fired a brilliant shot into the top corner of the goal at their end on 63 minutes. It was a goal worthy of winning any final and capped a superb performance from the Belgian.

It had been a game of few clear chances up until that point but Kasper Schmeichel was then forced into two fantastic saves at the other end, pushing a Chilwell header onto the post and then pulling off another wonderful stop to deny Mason Mount, as Chelsea desperately searched for a response. 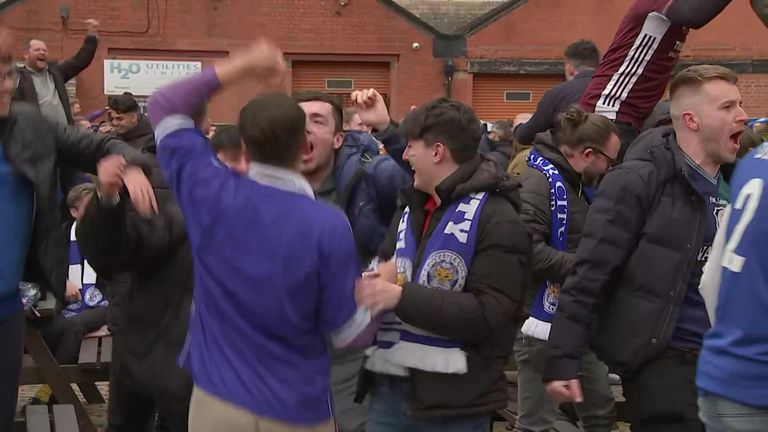 Former Leicester defender Chilwell thought he'd done just that, when Caglar Soyuncu's clearance went in off him, but VAR rightly spotted the Chelsea man had strayed marginally offside in the build-up.

Leicester, who lost key defender Jonny Evans to injury midway through the first half, held on and, 52 years after their last appearance in a FA Cup final, were able to hold the trophy aloft for the first time, adding another remarkable chapter to their story, following their 2015/16 Premier League triumph.

There will be little time for the Foxes to celebrate the achievement, though, with Chelsea hosting Leicester on Tuesday, live on Sky Sports, a crucial contest in the race for a top four finish in the Premier League.

How Leicester won the Cup...

Chelsea were playing in their fourth FA Cup final in five years and looked more accustomed to the occasion in the early stages, forcing Leicester onto the back foot from the off, with Reece James deployed as one of the three centre-backs to cover the Foxes' counter-attack.

The switch looked a smart one from Chelsea boss Thomas Tuchel and it paid off on 16 minutes when James made a crucial block on a Jamie Vardy shot from eight yards out.

Soyuncu then headed over from a Tielemans free-kick, as Chelsea only had off target shots from Antonio Rudiger, Mason Mount and Timo Werner to show from their fast start.

The Blues were then their own worst enemy on 29 minutes, when Werner flicked a cross just out of Cesar Azpilicueta's reach, when the Spaniard appeared prime to score.

Leicester suffered a serious blow on 34 minutes when centre-back Jonny Evans - who was in a race to be fit for the final - was forced off with what appeared to be a recurrence of his heel problem, however his young team-mate Wesley Fofana stepped up in his absence and pulled off a brilliant double block soon after to deny Werner.

Headers from Soyuncu and Vardy flashed wide just before the break but when the half-time whistle sounded, neither side had worked the opposition goalkeeper.

Marcos Alonso finally did that with a tame header on 53 minutes, nodding straight at Schmeichel, before Leicester forced a series of corners and began to get a stronger foothold in the game, with Tielemans their chief creator.

He went from creator to finisher in stunning style just after the hour though, finding space 35 yards out and firing a brilliant strike into the top corner before celebrating with the Leicester fans behind that goal. It would be Leicester's only shot on target of the match - but what a shot.

Chelsea's players appealed for handball against Ayoze Perez in the build-up, with the ball deflecting up off his knee onto his arm as he intercepted a pass, but referee Michael Oliver wasn't swayed.

At the other end Schmeichel saved superbly twice, first from a Chilwell header, which he tipped onto a post, and then from a Mount snap shot, which he pushed behind. But the Foxes 'keeper thought he had been beaten on 89 minutes when Soyuncu smashed the ball in off Chilwell.

But Chelsea's celebrations were silenced and Leicester fans were bouncing once again when VAR correctly judged Chilwell had stepped offside when he received Thiago Silva's long pass in the build-up.

At the final whistle, Leicester boss Brendan Rodgers ran onto the pitch, celebrating his first major honour in England, to the sound of huge cheers from the end containing his side's supporters.

It was another special, historic moment for Leicester - but Chelsea will be out for revenge on Tuesday at Stamford Bridge. 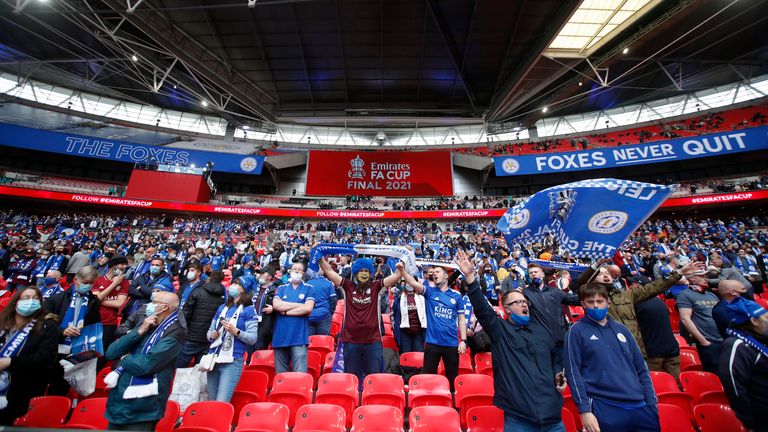 Dharmesh Sheth reports from Wembley on a day when Leicester City won their first FA Cup - and 21,00 spectators were able to attend, including fans of the two finalists, NHS staff, other key workers and local residents

Leicester manager Brendan Rodgers: "I'm very proud, it's a historic day for the club. Winning the FA Cup for the first time is clearly a special day. The players were so courageous in the game.

"I'm so pleased for Khun Top (chairman) and the family. It was a dream of theirs to win the FA Cup and we have been able to deliver that.

"We were playing against the Champions League finalists, we knew at times we'd have to suffer but we were worthy of the win.

"Every final you ever enter you want to win it. I have an overriding feeling of satisfaction but I'm more pleased for everyone else, the feeling it gives the supporters.

"It's a trophy the club really wanted to win. It was a great victory for us. For a club like Leicester to be in the final with a great club like Chelsea, people may have been hoping from a neutral point of view we could go on and upset the odds."

Chelsea head coach Thomas Tuchel: "Of course we are disappointed, but we are not angry, it's not on our boys. Today we are simply unlucky. We have never hidden the fact that you need luck in this game to be able to win on this level.

"All the time you need momentum, little details and decision making, referee and sometimes to win with a shot like today.

"We defended very, very well, were aggressive in counter-pressing, we didn't allow any counter-attack chances, no half-chances, and I was absolutely happy with the work-rate intensity.

"But in the decision-making we were a bit too hectic, a bit too straight up front. We wanted to force the solution too far, we had unnecessary ball losses and imprecise decision making.

"We created some two-against-two and two-against-three situations, that we couldn't do as well as we should have."

Chelsea and Leicester meet again on Tuesday in the Premier League, live on Sky Sports from 8pm; kick-off 8.15pm.

The trio discuss the twists and turns of a memorable final, the return of 21,000 fans to Wembley, and what the result means for both managers and both clubs ahead of a key top-four race Premier League clash between them on Tuesday night.