Timo Werner and Ben Chilwell both struck late as Chelsea overcame 10-man Southampton 3-1 at Stamford Bridge in a game shrouded in VAR controversy.

Trevoh Chalobah headed in an early opener for the hosts (9) and Thomas Tuchel's men thought they had doubled their lead when Werner's header was ruled out by VAR for a foul from Cesar Azpilicueta on Kyle Walker-Peters in the build-up.

Southampton took full advantage of their reprieve as a foul by Ben Chilwell on Tino Livramento inside the box allowed James Ward-Prowse to level (61) but the Saints captain then saw red for a late challenge on Jorginho, upgraded to a red following VAR review.

It proved a turning point as Werner met Azpilicueta's cross to restore Chelsea's lead (84), and Chilwell added a third five minutes later to ensure Tuchel's men returned to winning ways - and top of the Premier League table ahead of Liverpool's clash with Manchester City on Sunday, live on Sky Sports.

Man of the match: Timo Werner.

Chelsea entered the game having been brought back down to earth following their midweek defeat at Juventus, which added to the disappointment of last weekend's first Premier League loss at home to Manchester City.

In his programme notes, Tuchel revealed he expected a 'super intense game' against a Southampton side still seeking a first Premier League win this season, but Chelsea looked revitalised in the opening period, aided by five changes.

One of those, Callum Hudson-Odoi, particularly impressed but it was through a familiar source that the hosts very nearly broke the deadlock inside five minutes. Azpilicueta fed Romelu Lukaku - who had scored nine goals in his 12 previous Premier League games against Southampton - but his effort was smothered by James McCarthy.

Chelsea didn't have to wait long for their opener, however. What will disappoint Ralph Hasenhuttl is the manner of the goal. A corner from Chilwell, on his first Premier League start of the campaign, was flicked on by Ruben Loftus-Cheek and Chalobah was unmarked at the far post to head home.

It was the first goal Saints had conceded in the first half of any league game this season, and it was from another corner that they came close to shipping a quickfire second. Chilwell was again the provider, but this time Antonio Rudiger rose to head over.

Ruben Loftus-Cheek made his first Premier League start since September 2020 as Chelsea hosted Southampton at Stamford Bridge. Boss Thomas Tuchel made five changes as the Blues sought to hit back from successive 1-0 defeats, to Manchester City and Juventus.

Southampton arrived in the capital having failed to score in five of their previous eight league games, including each of the last three in a row, but they came close to ending their drought when Ward-Prowse fired just wide of the post midway through the first half.

Chilwell continued to get forward at every opportunity as his give-and-go with Mateo Kovacic resulted in McCarthy keeping out the left-back's low strike with his feet.

Southampton retained a threat on the counter and Hasenhuttl looked demonstrably disgusted when Theo Walcott headed over from Walker-Peters' cross from close range.

It was a miss that really ought to have been punished before the break when controversy came calling. Werner had been a constant outlet for Chelsea, and he thought he was finally celebrating his first Premier League goal of the season four minutes before the interval.

By then, Lukaku had already seen his own finish ruled out for offside from Rudiger's pass, but when Werner rose to head home Hudson-Odoi's cross, there seemed little apparent reason to rule it out.

That was until VAR Mike Dean intervened. Referee Martin Atkinson was called across to his pitchside monitor and after a brief consultation, agreed with Dean that Azpilicueta had fouled Walker-Peters in the build-up to the goal.

It was a soft decision that incensed Tuchel, to such an extent that the Chelsea head coach collected a yellow card for his troubles. Conversely, the incident galvanised Southampton, who introduced Ibrahima Diallo for Walcott at the break.

Werner looked to shake off the sense of injustice as he tested the gloves of McCarthy within five minutes of the restart, but Hasenhuttl's men grew into the contest and were awarded a penalty that Chelsea fans could have few complaints about.

Chilwell was caught flat-footed as Livramento nudged the ball away from him inside the box to take the contact. Atkinson pointed to the spot and Ward-Prowse did the rest from 12 yards, sending Edouard Mendy the wrong way.

4 - James Ward-Prowse is the fourth Southampton player to both score and be sent off in a Premier League match after Peter Crouch (May 2005), Sadio Mané (October 2015) and Pierre-Emile Højbjerg (December 2018). Conflicted. pic.twitter.com/PajctwglKX

Tuchel had seen enough and summoned Mason Mount from the bench, irked by how the game seemed to be slipping away from his players, but Chelsea wrestled back control - helped by the next VAR intervention.

Moments after McCarthy had brilliantly denied Werner once more, Ward-Prowse dived in on Jorginho as Chelsea looked to play out from the back. Atkinson initially produced a yellow card but after VAR Dean called him across to inspect the incident, the challenge was upgraded to a red.

It was Southampton's turn to feel aggrieved, and their anger would intensify when Werner restored Chelsea's lead. Azpilicueta was found in space down the right by substitute Ross Barkley and when his first-time ball was played back across goal, Werner was alert to pounce.

The roof came off Stamford Bridge with Werner's sense of relief felt by all those of a Chelsea allegiance. There was still time for Chilwell to put the gloss on a hard-fought victory.

Lukaku really ought to have scored himself when somehow hitting the post from Mount's cross, with Azpilicueta striking the bar on the rebound. But the ball fell kindly for Chilwell as he steadied himself and volleyed beyond McCarthy, despite his best efforts to prevent it from crossing the line.

Man of the match: Timo Werner

Since arriving at Stamford Bridge last summer, it really has felt that misfortune has followed Werner, who has now seen a remarkable 16 goals disallowed for one reason or another. This was put to Tuchel in the aftermath of his latest run-in with VAR.

"We have the feeling that every time he scores, there's a VAR decision going on to take it away from him," the Chelsea boss said. "They're all very narrow decisions. He has to keep on going, he can still improve his game. There are lots of things he can improve but we're all pleased he scored late as it was very important to secure the win. He was where he needed to be."

Werner was rewarded for his endeavour. Here, he had more shots than any of his team-mates (6), with four of them on target. No player won more than his three fouls. Others may well have accepted it wouldn't be their day, but the much-maligned forward ensured he would depart with a smile still on his face.

⚽️ Timo Werner & Ben Chilwell are the 11th & 12th different players to score in PL for Chelsea this season (from 15 goals scored) pic.twitter.com/waGmKQXy86

Chelsea boss Thomas Tuchel on bringing on Ross Barkley: "Ross had a very good situation in Juventus when he delivered the pass to Romelu in our best chance of the game when we could've equalised. Most importantly, Ruben [Loftus-Cheek] and Ross at the moment feel no pressure but they feel the support.

"Six weeks ago, they may have not felt they would get the minutes but they can help us. They have a totally positive spirit. In the last two games, we lost and felt something was lacking. We decided to put in Ruben as we were aware of the high pressing in midfield. We hope they can show what they are showing in training."

On not turning to Kai Havertz or Hakim Ziyech: "We always try to do our best to bring the players into the best shape but after a lot of chances we have to admit that Kai and Hakim are not in their best shape. They struggle in this moment to be decisive. 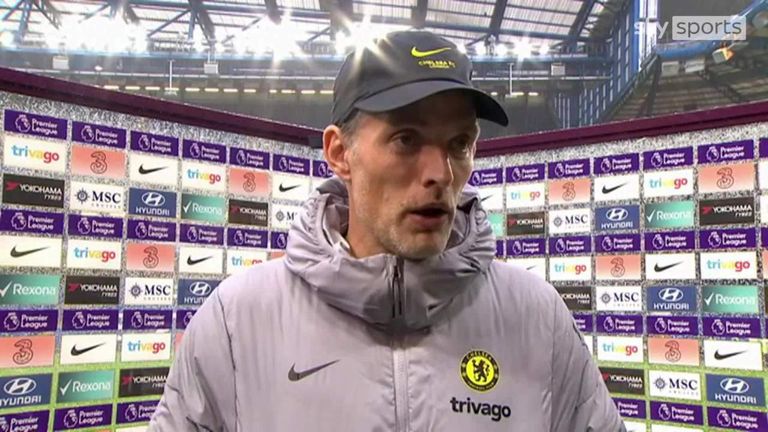 Chelsea boss Thomas Tuchel said his side could have had more goals against Southampton but admitted the visitors made it difficult to find open spaces.

"They were both decisive in pre-season and even in our first game against Villarreal in the Super Cup, Kai delivered the pass for Hakim to score but they've lost a bit of belief and confidence. Nobody has major concerns but we have to pay attention to form. We have to win games and we felt we needed a mix of players used to our style of play and with quick decisions. At a club like Chelsea, you need to be sharp every three days."

Southampton boss Ralph Hasenhuttl: "The plan was to be a tough opponent against a Champions League winner. We played a brave game, especially in the second half. In the first half we'd been very open and risky. But we were more solid and came back well. But the red card killed everything as the rest was working in our favour.

"I knew that when Mike Dean was on VAR, I felt he'd have a look at it. But I don't want to say either way - I've not seen it yet. Maybe he was a little bit late. It wasn't so smart from Prowsey. Maybe a yellow card would've been OK. 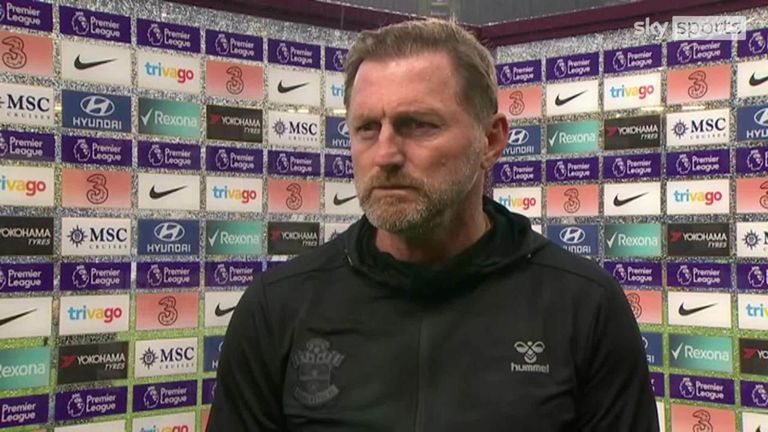 Southampton boss Ralph Hasenhuttl said he thought his side were incredible in their 3-1 defeat to Chelsea.

"He's the captain so he knows he didn't help us today but there's no reason to be angry about this. We showed a good performance but it's a pity we couldn't finalise it.

"Why should we change? I think our style is nice to watch. I'm not a big fan of parking the bus against the big teams. I'm a fan of the way we press. When we lose, I want to lose in the way we play.

"It's never nice to lose, but I must say congratulations to everyone in the stadium as everyone saw a fantastic game. Against a Champions League winner, this is how I like to see my team playing. If I had to make a decision before the game, I'd do the same again."