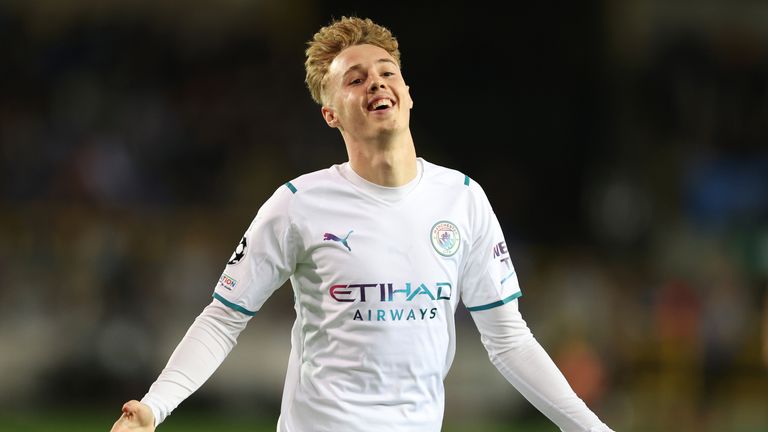 Heading into the game, there was an element of pressure hanging over Pep Guardiola's side following their 2-0 defeat at PSG last month. Club Brugge started the game one point ahead of the Premier League champions, but any pressure was quickly relieved as the visitors secured a 2-0 advantage going into the break thanks to Joao Cancelo's strike (30) and Riyad Mahrez's penalty (43).

Their dominance continued after the break as Kyle Walker finished another fine City move in the 53rd minute before Palmer made an instant impact from the substitutes' bench.

3 - Cole Palmer has become only the third teenager to score in the UEFA Champions League for Manchester City after Phil Foden and Kelechi Iheanacho. Aged 19 years and 166 days, Palmer is the 10th youngest Englishman to score in the competition. Impact. pic.twitter.com/JQiIzOwuqU

The 19-year-old was only on the pitch for two minutes before scoring his first Champions League goal with a fine left-footed finish into the bottom corner (67).

Club Brugge finally had something to cheer late on when Hans Vanaken grabbed a late consolation (81) but it was the only blemish for City, who added a late fifth as Mahrez grabbed his second of the game (84) to put the finishing touch on a near-perfect night for Guardiola and his side as they look to secure top spot in Group A.

City were quick out of the blocks and low crosses from Phil Foden and Cancelo just evaded Kevin De Bruyne and Jack Grealish respectively.

The visitors also had the ball in the back of the net on two occasions through Grealish and Rodri but both times the goals were ruled out - the first for a foul by Grealish on Clinton Mata before Aymeric Laporte was flagged offside after teeing up Rodri for a tap in.

There was no let up from Guardiola's side and more chances went begging as their final ball let them down on numerous occasions, but that all changed on the half hour mark.

Foden's inch-perfect through ball released Cancelo, who showed great composure to hold off Kamal Sowah's challenge before poking the ball through the legs of goalkeeper Simon Mignolet.

City extended their advantage just before the break when Mahrez was felled by Stanley Nsoki's late lunge inside the penalty area, and the Algeria international picked himself up off the turf to send Mignolet the wrong way and double his side's advantage at the break.

There was no let up from City in the second half as Walker put the finishing touch on another fine move after being played in by De Bruyne.

With his side three goals to the good it allowed Guardiola to ring the changes, but their dominance continued with Palmer producing a moment he will never forget.

After combining with fellow substitute Raheem Sterling, the youngster produced a fine left-footed finish to beat Mignolet for just his second City goal.

Man City made four changes from the 2-0 win at Burnley at the weekend.

Ederson returned in goal, while Kyle Walker, Ruben Dias and Jack Grealish also came back into the starting line-up.

Meanwhile, Raheem Sterling was named on the bench alongside Gabriel Jesus.

The home fans did eventually get something to cheer when Vanaken swept home from close range with just under 10 minutes remaining, but it proved to be only a consolation and there was even time for City to respond.

Mahrez raced onto Fernandinho's long ball over the top before putting the exclamation mark on City's big win.

5+ - Manchester City have scored 5+ goals in a game 40 times since Pep Guardiola took over, which is as many as the second and third-most combined in English football during this time:

Analysis: City could have scored more

"What a performance from Man City that was. Club Brugge have shown already in the Champions League this season that they have quality - but City thrashed them.

"Phil Foden was once again the standout performer for Pep Guardiola's side but what a moment for Cole Palmer to bend in his first Champions League goal. The first of many, I'm sure.

"City could even have scored more in the final minutes but that win is just what they needed after losing at PSG last time out."

Pep: One of our best performances in Europe

Manchester City boss Pep Guardiola: "We were so good. It was one of the best performances we have done in Europe.

"We made a good game, our pressing was good. We recovered the ball so quickly and after that we used the ball with a lot of sense," he added.

"We found a lot of passes with Phil. We had runners in behind. We could have scored more goals, we had many chances.

"All of us are delighted with the performance we have done."

“I know how it works with young players. We have to be calm and patient. His position is the second team but at the same time he trains with us and works with our principles.

“I am happy with the goal. He could have done a few actions a little bit better, but that is normal. It is experience. Step by step we give our young players an opportunity.”

Manchester City have won 35 of their 53 matches in the UEFA Champions League under Pep Guardiola (D7 L11), with only Bayern Munich (39) winning more games in the competition since the Spaniard took over in 2016-17.

This was the 19th time a Pep Guardiola side has scored 5+ goals in a UEFA Champions League match, more than twice as many times as any other manager's sides have done so (Arsène Wenger and Sir Alex Ferguson, 8).

Club Brugge have failed to win any of their last 13 matches against English sides in Europe (D3 L10) since beating Chelsea at home in the Cup Winners' Cup in 1995 - they have conceded 35 goals across those 13 games.

Phil Foden has six goals and six assists in the UEFA Champions League for Manchester City. The only player to provide more goals and assists under Pep Guardiola in the competition before turning 22 is Lionel Messi (14 - 9 goals and 5 assists).

What's next for Man City?

Manchester City face a trip to Brighton in the Premier League on Saturday; kick-off 5.30pm, live on Sky Sports.

Their next Champions League assignment is against Club Brugge on November 3 at the Etihad Stadium; kick-off 8pm.