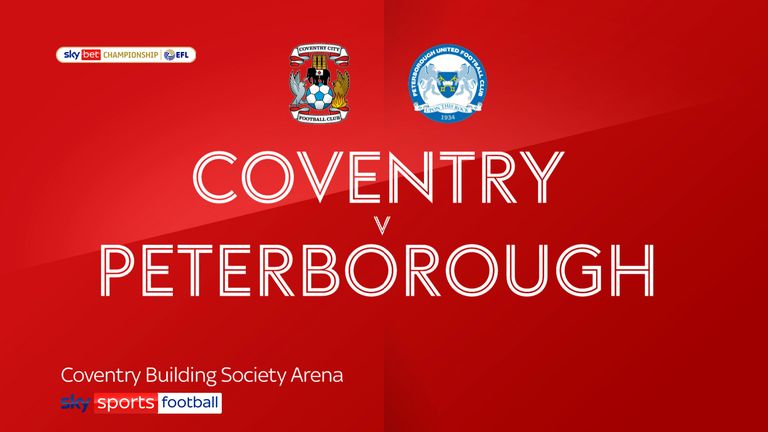 Highlights of the Sky Bet Championship match between Coventry and Peterborough.

Viktor Gyokeres' double helped Coventry move up to second in the Sky Bet Championship with a 3-0 win over Peterborough on Friday night.

The Swedish striker scored twice in three minutes soon after Gustavo Hamer's opener to blow away Darren Ferguson's Posh, who remain one place outside the bottom three.

The Sky Blues, who came into the clash off the back of a 1-1 draw against Millwall last weekend, made two changes as Jamie Allen and Martyn Waghorn returned to the starting line-up in place of Ben Sheaf and Matt Godden.

It was Brazilian midfielder Hamer who could have opened the scoring twice in the first half with an effort from outside the box and a free-kick he whipped over the top of David Cornell's goal, whilst Callum O'Hare would surely have scored if he had got a touch to Todd Kane's cross.

Mark Robins' side, fourth before the start of play, started the second half superbly when Gyokeres twisted and turned past Dan Butler but scuffed his shot wide of the left-hand post.

Posh's resistance was finally broken after 57 minutes, though. Hamer found himself in the right place at the right time to tuck home his first goal since January after a plethora of shots on the Posh goal.

Gyokeres joined the action just after the hour mark when he was the beneficiary of another one of Kane's crosses.

Hamer started the move, shifting the ball to the right for the former Chelsea man to whip a ball into the six-yard box where Gyokeres was waiting to tap home.

The 23-year-old completed the eight-minute rout three minutes later after another mazy run inside the box, his deflected shot looping over the helpless Cornell and into the back of the net.

Peterborough's best chance came as the clock hit 90 minutes, Simon Moore thwarting Harrison Burrows with his legs as the substitute ran through on goal.

It was a thoroughly deserved win for the Sky Blues who amassed 16 shots on the way to keeping up their 100 per cent home record and keeping them flying high near the Championship summit.

Coventry's Mark Robins: "We found it difficult to get our noses in front, but from then on we really grew in stature and took the game away from them. I thought it was nothing less than we deserved, the performance was brilliant, the atmosphere was electric and it was a brilliant evening's work.

"It was a difficult game, I think they've given us a stern test. I thought we were decent in the first half and we had a lot of the ball, got into dangerous positions but just lacked a bit of quality at the end."

Peterborough's Darren Ferguson: "We concede, we collapse. It's another disappointing away defeat, another very similar away defeat. We concede, we collapse. Something has to change dramatically here because this has happened four times now. In the first half I didn't think we played with enough belief in the final third attacking-wise, but we needed to do more to win the game, we didn't come for a 0-0, we wanted to win the game.

"It's clear as day the problem, we conceded three goals in seven minutes. Seven minutes before that you're thinking OK you're in the game, it's very tight, seven minutes later the game is over and you're worried that it could be an absolute pasting. Some of them need to prove me wrong because I'm really, really not happy with that, I can't stand watching that again. We need to be tougher, it's not about ability, it's about being mentally tough and at the moment clearly we're too soft."