Report from the Sky Bet Championship clash at St Andrew's as goals from Gustavo Hamer, Matt Godden and Sam McCallum earned Coventry their second league win of the season and brought Reading's unbeaten start to its conclusion 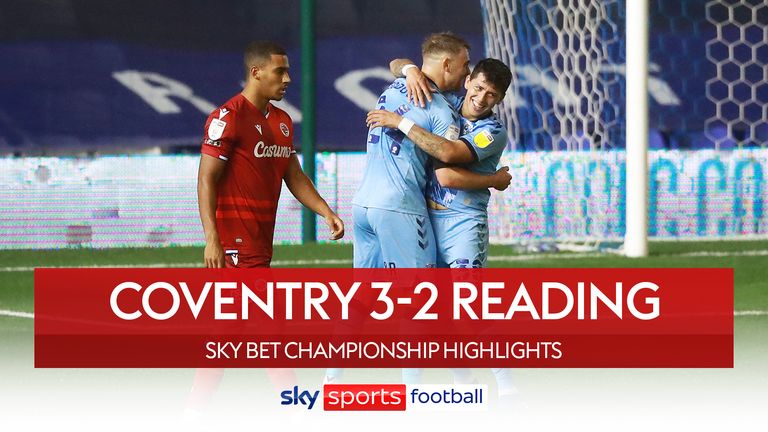 Highlights of the Sky Bet Championship match between Coventry and Reading

Reading's near-faultless unbeaten start to the season came to an abrupt end as they were beaten 3-2 by Coventry at St Andrew's on Friday night.

The Sky Blues edged ahead, in a first half devoid of clear cut chances, when Gustavo Hamer struck his first goal for the club (23), but Lucas Joao tucked home for his ninth goal in as many games to level proceedings.

Matt Godden then tapped in from close range (76) and Sam McCallum thundered in a brilliant effort just minutes after his introduction (85), but though George Puscas added a second for the Royals in stoppage time (90+2), it wasn't enough to earn a point.

In spite of the defeat, Veljko Paunovic's Reading remain five points clear of second-placed Bournemouth ahead of the weekend's action, while an important three points for Coventry sees them deservedly move out of the bottom three and up to 18th.

How the unbeaten Royals were toppled in the Midlands

While Coventry's return to the Championship had been difficult in terms of results, Mark Robins' side have displayed a good level of confidence in making the step up to the second tier, which was apparent from the first whistle at St Andrew's.

Setting aside a wayward pass from Fankaty Dabo that almost gifted Sone Aluko a goal inside three minutes, it was a competitive start and one that the Sky Blues took advantage of when they became the first team this season to take the lead against the division's leaders.

It was a goal born out of excellent team work. Ryan Giles raced down the left and fed Godden, who turned and laid the ball off to Hamer, who calmly guided home his first goal since a summer move from Dutch side PEC Zwolle.

The quiet start to the second half gave no clues as to what was to come after the hour mark, but when Joao held off his marker to angle a shot past Marko Marosi, the intensity increased. Max Biamou somehow hit the crossbar from just a few yards out before Godden swept home after Rafael had palmed Dabo's shot into his path.

Substitute McCallum looked to have added the gloss when he cut in off the right flank and thumped a swerving shot through Rafael's hands, but George Puscas set up a tense finale when he found the back of the net after Joao's cushioned pass.

Fortunately for Robins and co it wasn't enough for Reading to extend their eye-catching start into another week.

Man of the match - Ben Sheaf

The 22-year-old Arsenal loanee showed how he is coping with the step up from playing in League One with Doncaster last season, and League Two with Stevenage the season before, with a dominant performance in midfield. 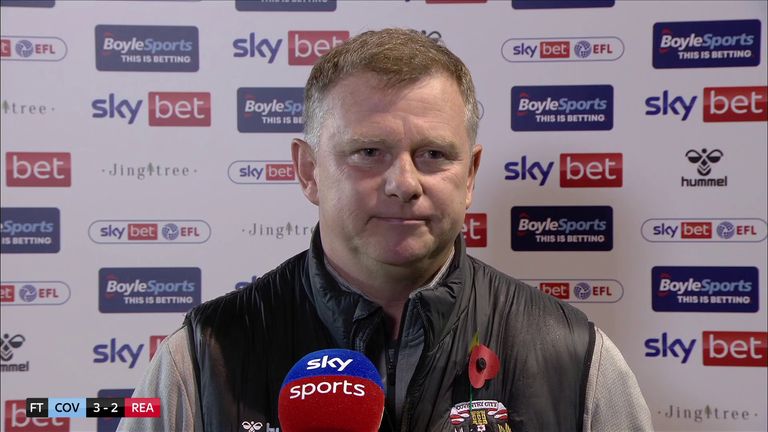 Coventry's Mark Robins: "Reading are a good side and you can see why they've have the results they've had so far. They made us work really hard for it, as you'd expect. I thought we played some decent football and I thought we created a decent amount of chances.

"All in all, we've got to be really pleased with it because, after you've had a couple of defeats, it can hit the confidence. But like I've said before, for us it's about concentrating on trying to close the gaps. While there is still improvement in us, they are starting to learn and that's the most pleasing thing." Reading's Veljko Paunovic: "I think the guys gave it their all. In terms of the attitude, we had a very good game. I think we played very good football, we had opportunities in the final third. We scored goals but unfortunately we failed this time on the other side of the game, which we had done so well.

"Defensively we conceded too many goals to come back when there were just a few minutes left of the game. We played until the end and I'm proud of the guys. The effort was there and the basics were also there so we just have to keep on improving."

Both sides are next in action on Wednesday November 4. Coventry travel to the City Ground to face Nottingham Forest at 7.45pm, while Reading host Preston at the Madejski Stadium at 7pm. The two fixtures are available to watch live across Sky Sports.