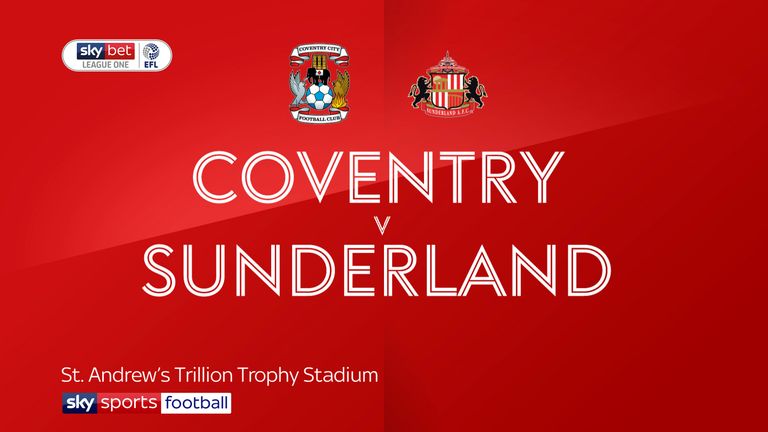 Coventry City moved to the top of Sky Bet League One thanks to a hard-fought 1-0 victory over promotion rivals Sunderland.

Matt Godden's 14th goal of the season after just 94 seconds proved the difference in a feisty, competitive game at St Andrew's.

The visitors thought they had equalised when Luke O'Nien deflected Max Power's shot past Marko Marosi, only for the referee to consult with the assistant and correctly rule it out for offside once celebrations had finished.

Coventry move two points clear of Rotherham at the top of the table and five points clear of Portsmouth in third, while Sunderland remain fifth and are four points adrift of the automatic spots.

How Coventry reached the summit

Coventry were on the front foot from the very first whistle and wasted no time in taking the lead through the in-form Godden - his third in three games.

Following a poor clearance, Jamie Allen picked up the ball in the middle of the park and slipped it behind the Sunderland defence for Godden. He took one touch before firing past Jon McLaughlin and into the bottom corner.

The game quickly became a battle in the middle of the park with numerous late tackles flying in, the worst coming from O'Nien on Sam McCallum, but referee Salisbury was reluctant to get his card out.

The hosts failed to create any other chances in the opening 45 minutes, while Sunderland's best opportunities came from set-pieces.

Tom Flanagan missed a gilt-edged chance when free at the back post, firing over as he opted to go with the side of his foot rather than stoop low to header. Charlie Wyke then headed over the bar from a wicked Chris Maguire corner as Coventry's marking let them down.

There was just one change to the Coventry side who drew with leaders Rotherham as Jamie Allen came in for Max Biamou. Sunderland were unchanged from the side who snatched a last-gasp draw against Fleetwood.

There was plenty of frustration after the break for Phil Parkinson's Sunderland as they continued to give the ball away in the final third. George Dobson's low shot deflected narrowly wide of the post, while the impressive Allen forced McLaughlin into an awkward save at the other end with his effort from a tight angle.

On 75 minutes, Sunderland and their travelling fans thought they had drawn level. Power's low shot hit a Coventry leg, before striking O'Nien and bouncing beyond Marosi. The flag didn't go up immediately and referee Michael Salisbury went to consult with his assistant, once they had spoken it was correctly ruled out.

Despite Sunderland dominating territory, it was Godden who had the best chance in the closing stages. He latched onto a clearance and raced away from Alim Ozturk, only to take the shot early and fire it wide of the post.

Sunderland had three strikers on the pitch by the final whistle yet they couldn't force Marosi into a save of note and it was an afternoon that belonged to Coventry, their dogged defence and Mark Robins, who ended his 200th game in charge sitting pretty at the top of League One for the first time this season.

Man of the match - Jamie Allen

Brought back into the side for Max Biamou, Jamie Allen took less than two minutes to justify his selection and was a constant threat whenever he picked up the ball for Coventry.

His ball to Godden was perfectly weighted for the goal, while Coventry's best chances in the second half came after his good work.

It wasn't always eye-catching skill or beating his man, but clever passes and a high work-rate mean he deservedly picked up the man-of-the-match award at the final whistle.

"They're a powerful team, full of good players and their confidence is up, but so is ours. We've created enough chances to win it by more, but I'll take the 1-0 all day long.

"I've got to be pleased with the overall result but the performance was strong and solid too. The three lads at the back were outstanding and we did enough to win the game. I think it was a just result in the end."

Sunderland manager Phil Parkinson: "Disappointed to concede early. We did the same against Fleetwood and it's very frustrating for us. It was always going to be a tight game, we had a few decent chances in the first half and it became a bit frantic towards the end when we were chasing the game. We probably lacked the little bit of quality that we needed when we were trying to get back into the game.

"It wasn't a lack of effort, I thought we gave everything. We just needed more composure at times to work our way back into the game."

Coventry travel to Ipswich next Saturday, while Sunderland host Gillingham at the Stadium of Light.