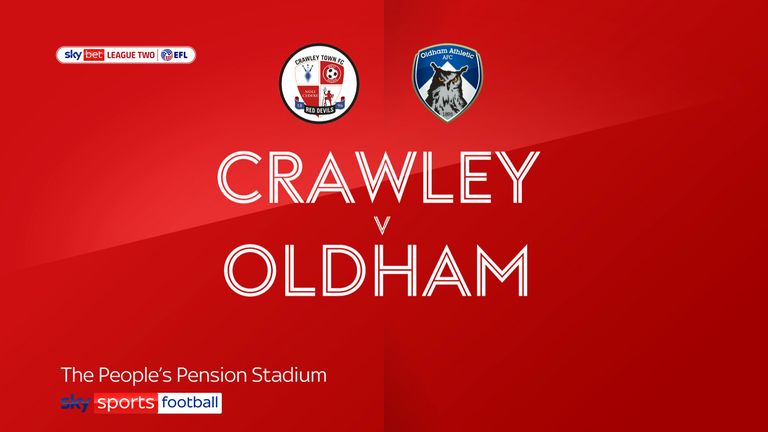 Highlights of the Sky Bet League Two match between Crawley and Oldham.

The Latics' convincing win was their second in eight outings since Keith Curle took over as manager.

Oldham went into the game with only one win in their previous 10 away league outings but, in a bright start, Crawley keeper Glenn Morris was quickly called into action.

The veteran Morris made a fine double save after 18 minutes to keep out goalbound efforts from Callum Whelan and Davis Keillor-Dunn.

Morris had earlier had a low shot from Harry Clarke after holding a 20-yard free-kick by Whelan.

Two goals inside three minutes just before the break put Oldham in charge with top-scorer McAleny firing a beauty into the roof of the net from Keillor-Dunn's pass.

Recalled defender Cameron Borthwick-Jackson then notched his first goal for the club, latching onto a pass by Dylan Fage to find the bottom corner.

Crawley were then fortunate when Keillor-Dunn fired over after Morris could only block a shot by Dylan Bahamboula.

McAleny was on target again only two minutes after the interval, firing into the bottom corner after a long ball to the edge of the area.

The Latics continued to threaten and Bahamboula had a free-kick held by Morris at the second attempt, Borthwick-Jackson having earlier shot just wide.

Off-song Crawley grabbed a consolation in the last minute when substitute James Tilley drilled a shot into the bottom corner after Latics failed to clear a corner.

But Bahamboula capped a fine Oldham display with their fourth goal from close range in stoppage time.