England will face Spain in the Euro 2022 quarter-finals on Wednesday after Marta Cardona headed a last-gasp winner to earn the Spanish a 1-0 victory over Denmark.

Having gone into the game only needing a draw to progress from Group B in second place behind Germany, Spain controlled the contest at the Brentford Community Stadium and were eventually rewarded for their efforts in the 90th minute.

Cardona looped a header over Denmark goalkeeper Lene Christensen after Olga Carmona's cross had picked her out at the far post.

Denmark were well-organised, unlike in their opening 4-0 defeat to Germany at the same ground, but were unable to find a way through their highly-rated opponents, having needed a victory to avoid an early exit.

Spain dominated possession by lacked creativity up front in front of 16,041 fans in west London.

There were no clear-cut chances for either side in the opening exchanges as Spain enjoyed the lion's share of the ball but struggled to break down the stubborn Danes.

Pernille Harder had the first significant chance of the match when Denmark broke forward and she was played in down the right.

The Chelsea player beat the defender but was left with a narrow angle for her shot and Sandra Panos was able to make the save.

Spain came close to taking a lead of their own in the 25th minute through Athenea del Castillo but the ball was saved on the line by Christensen.

Mariona Caldentey had the next opportunity for Spain just after the half-hour mark but was denied by Christensen's diving save.

A looping ball from Del Castillo was caught but then spilled by Christensen, although the keeper reacted quickly to block the follow-up effort from crossing the line.

The second half started in much the same fashion as the first, with Denmark containing Spain successfully at the back while struggling to mount their own meaningful counter-attacks.

Christensen was called upon again in the 71st minute to make a low save to stop Carmona's low strike, while Harder fired over the bar at the other end in a rare Denmark break forward.

Denmark's best chance of the game came in the 78th minute when substitute Nadia Nadim found rare space in the area and was able to turn and shoot, but Panos made herself big and closed down the Denmark forward to make a crucial save.

Moments before full-time Spain finally broke the deadlock to seal their meeting with hosts England in Brighton on Wednesday.

This time it was their turn to attack on the counter and, when the cross came to Cardona, she headed home to wrap up victory.

What can England expect from Spain? | 'The pressure is on the hosts' 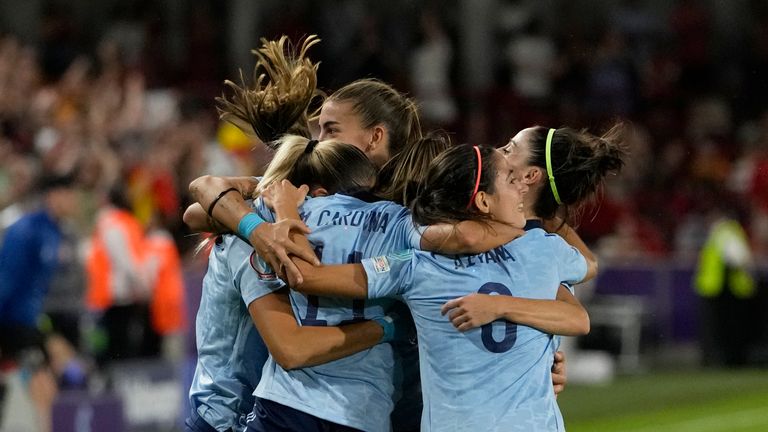 Ruesha Littlejohn is interested to see how England cope without possession against Spain in what looks to be a tight quarterfinal.

"It's very exciting. England will be looking like the favourites going into the game, they're flying, and with the backing behind them.

"But England won't take this lightly. Spain are quality, and it will be interesting to see how England deal with not being in possession. Spain are the masters of dominating the ball, so I'll be interested to see how disciplined England can be.

"I've actually been impressed with Spain's possession-based football, it's beautiful to watch. They're just missing the final product, the goals, the out-and-out No 9. Spain will be happy they've got England, because they have a point to prove.

"Being underdogs might free them up, as it's fair to say England are now favourites for the tournament, and the pressure is on them. Spain just need to focus on dominating the ball and getting the ball into the box.

"This will be a different game for England - I'll be interested to see whether England allow Spain to have the ball, because they have the pace down the wing if they want to counter them."

Spain will face England at the Amex Stadium in the first quarter-final on Wednesday; kick-off 8pm.