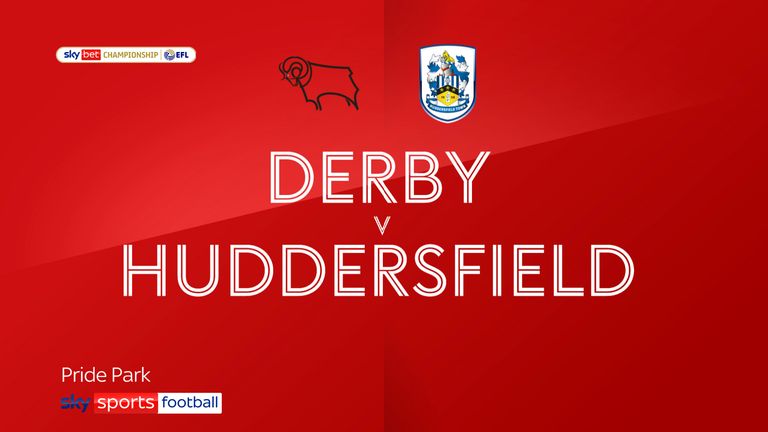 Highlights of the Sky Bet Championship match between Derby and Huddersfield

Curtis Davies had earlier celebrated his return to Derby when opening the scoring.

The 36-year-old defender, who only signed on Friday, forced the ball over the line following a corner but Huddersfield quickly replied through Sarr.

Fraizer Campbell had a great chance to win it for Huddersfield but was denied by Kelle Roos, while Ryan Schofield rescued the visitors in the final minute of added time by saving from Louie Sibley.

Huddersfield's preparations were disrupted ahead of the match after head coach Carlos Corberan tested positive for Covid-19, along with four first-team players, and was unavailable for the game.

Derby are operating under a transfer embargo although they did sign three non-contract players on Friday, with two of them, Davies and Richard Stearman, starting the game.

Huddersfield created the first opening when Ollie Turton's low cross from the right in the 14th minute was pushed out by Roos but Derby scrambled the ball away.

Derby forged a chance three minutes later when Max Bird played in Louie Watson but Schofield was able to drop on the ball.

A loose back pass gave Watson another chance in the 25th minute but Schofield forced him wide before Colin Kazim-Richards had a header deflected behind.

Derby were looking the more threatening side and they went ahead in the 39th minute when a corner was headed across his own area by former Derby midfielder Duane Holmes and Davies bundled the ball in at the back post.

But Huddersfield equalised in the 45th minute when Sorba Thomas curled in a free-kick which was headed powerfully in by Sarr.

Huddersfield started the second half strongly with Turton whipping in a cross that Jordan Rhodes failed to bring under control in the area.

Derby brought on Sibley and he fired just over after racing on to a Kazim-Richards pass in the 55th minute.

Sibley flashed another shot narrowly wide when Derby again broke quickly and Davies rescued his team in the 72nd minute when he turned behind a low cross after a swift Huddersfield counter.

Matty Pearson headed over from the corner and Huddersfield had a great chance in the 81st minute when Thomas played in Campbell but the striker's low shot hit the legs of Roos.

Huddersfield finished strongly and Holmes fired just wide in the 87th minute but Derby almost snatched it in stoppage time when Sibley's drive was turned over by Schofield.

Derby's Wayne Rooney: "I'm delighted for that group of players after what we've been through trying to prepare for this game. This week has been tough, I haven't been able to do it the way I would have liked, I changed my team three times since yesterday morning so for them to go out and put a good performance in and get a point is a real positive.

"I named the team yesterday morning because I had to try and prepare and that team was changed before I got back in off the training pitch because players had signed."

Huddersfield's first-team coach Danny Schofield: "I think it was a really positive performance, first and foremost a challenging game, it's always difficult to come away on the first day of the season against a good opponent.

"I think the preparation we had in pre-season has been really good, every player in the squad knows their role and responsibility if they have to come into the team so it was really quite a smooth transition to put players in."