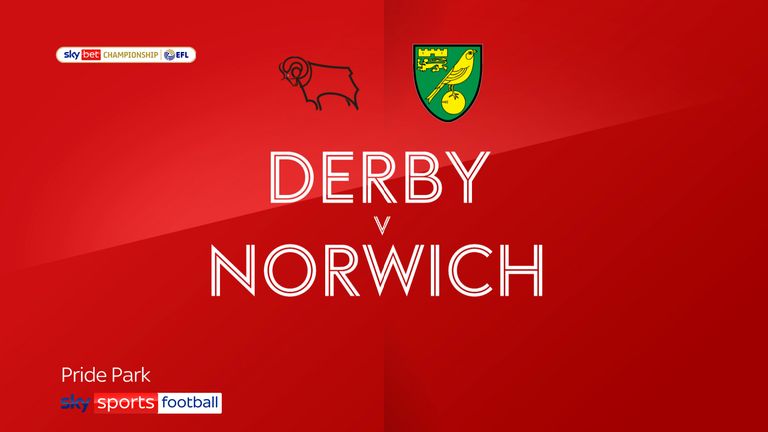 Norwich took another step closer to promotion when a Kieran Dowell free-kick secured a 1-0 win at Derby who are still looking over their shoulders.

The Championship leaders were dominant in the first half but had some anxious moments in the second as Derby fought back strongly and came close to snatching a point.

Goalkeeper Tim Krul made two good saves in the space of a minute but almost gifted Derby a point in stoppage time when he lost the ball inside his area but Graeme Shinnie could not take advantage.

Swansea's victory at Millwall meant Norwich could not win promotion on Saturday but they started with the confidence of a team that will soon be returning to the top flight.

Todd Cantwell had an early shot easily saved by David Marshall but the Scotland keeper was relieved to see Dowell's 12th-minute free-kick curl into the side-netting.

But Dowell adjusted his sights in the 21st minute when he was fouled by Craig Forsyth inside the 'D' and picked himself up to bend the free-kick into the top-left corner of Marshall's goal.

Norwich's movement around the box was threatening a second but Derby responded when Shinnie won the ball and found Tom Lawrence, who shot wide from just outside the box.

Another loose Norwich pass allowed Colin Kazim-Richards to find Patrick Roberts 12 yards out but Grant Hanley made a superb block to deny the winger.

The visitors were quickly back on the offensive in the 36th minute when Oliver Skipp surged forward and found Emi Buendia, who set up Cantwell but his low shot lacked the power to beat Marshall.

Derby were staying in the game and almost got Kazim-Richards in but the striker had strayed offside.

The Rams started the second half with purpose and Kazim-Richards got in at the back post in the 53rd minute but could not squeeze the ball past Krul, who made an even better save a minute later when he turned away a Teden Mengi drive.

It was a good spell from the home side who were driving forward from midfield and knocking Norwich out of their rhythm for the first time in the game.

Roberts had a great chance in the 74th minute when he dribbled past three defenders but Krul was out quickly to save at his feet as Norwich again looked vulnerable.

Teemu Pukki had been quiet and he got in on the right before his cutback was blocked but Derby were pressing, although the final ball lacked quality.

Krul nearly cost his side the game when he was robbed by Kazim-Richards but Shinnie fired over an empty goal.

Derby's Wayne Rooney: "I thought we performed very well, especially second half, and we can take some encouragement from the performance. For the first 25 minutes we showed Norwich too much respect and I felt after that you could feel the lads growing in confidence. Second half we got at them and caused them problems and overall I thought the performance was good and we deserved at least a point.

"We move on, the next couple of games are big for us, we need to take points leading into Birmingham at Pride Park so the next few games are huge for us. The performances in the last two games have been good but now we have to focus on getting wins because we're at a crucial time of the season."

Norwich's Daniel Farke: "I'm a happy man if I'm honest because the other results show it's not over and you have to keep going and you always have to be switched on. It was a hard-fought win, not a magic night like Tuesday (a 7-0 win over Huddersfield) but if you are working a little bit longer in football that's exactly what you expect.

"We got so much praise, so many compliments and then we have to deliver four days later in a difficult away game against a side fighting to stay in this league. In the past 90 points was always enough so my gut feeling was this win was really important. The pressure is now off a little bit and my feeling right now is I'm pretty sure at the end of the season we will definitely celebrate promotion.

"But it's not over the line and Brentford and Swansea have proved they are capable of winning all of their games so we have to stay focused. That's the only danger, we have to take care that we perform with the same concentration and then I'm quite confident we will bring it over the line."