Livingston move five points clear of bottom side St Johnstone with 1-0 win over Dundee United at Tannadice; Ayo Obileye scores only goal of game from penalty spot after Jeando Fuchs' foul; United drop to fifth in table after losing for third consecutive game 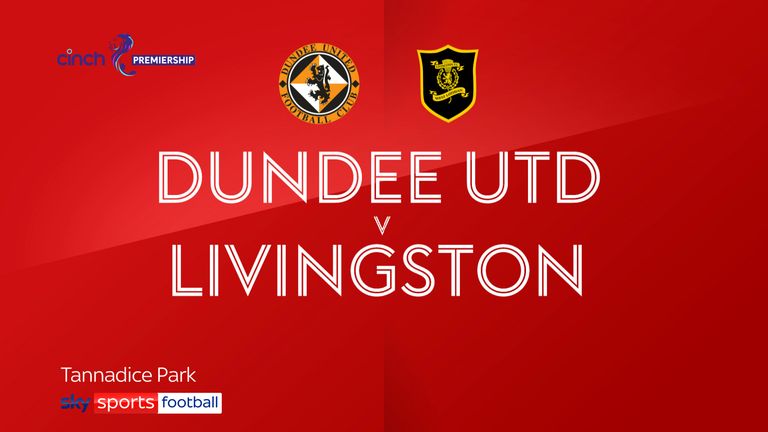 Highlights of the Scottish Premiership match between Dundee United and Livingston.

Livingston made it two cinch Premiership wins in a row with a 1-0 victory over Dundee United at Tannadice.

Ayo Obileye scored the only goal of the game from the penalty spot in the second half, with the result moving David Martindale's side up to eighth in the table.

It was another disappointing defeat for United, who have now lost three games in a row and have dropped down to fifth.

Shortly before kick-off, there was a late change to the home line-up, with on-loan Manchester United midfielder Dylan Levitt dropping to the bench to be replaced by Declan Glass.

The first chance of the game fell to United in the ninth minute but winger Ilmari Niskanen's shot was easily gathered by Livi keeper Max Stryjek.

The Lions had an opportunity of their own shortly after but Alan Forrest's angled drive was well held by United goalie Benji Siegrist.

Forrest then had another opportunity to open the scoring when he was played in by Cristian Montano but his 20-yard curling shot flew just wide of Siegrist's right-hand post.

In the 37th minute, United had a chance of their own, with Peter Pawlett teeing up Nicky Clark but the striker's shot on the turn was straight at Stryjek who made a comfortable save.

Shortly after, United produced a free-flowing move that ended with Pawlett cutting the ball back to Ian Harkes, but the American midfielder's composure deserted him and he blasted over the bar.

Right on the stroke of half-time, the home fans were shouting for a penalty as Harkes went down just inside the Livi penalty area under a challenge from Montano but referee Gavin Duncan awarded a free-kick to the visitors.

Ten minutes after the restart, there was a promising opening for Glass as he burst into the Livi box but instead of cutting the ball back, he attempted a shot from a tight angle that flew into the side netting.

Forrest then had another opportunity as he burst into the United box but his fierce shot was punched away by Siegrist.

However, Livi finally broke the deadlock in the 66th minute. Substitute Andrew Shinnie went down in the box after a barging challenge by Jeando Fuchs, with referee Duncan pointing to the spot.

Obileye stepped up to take the penalty, sending Siegrist the wrong way before calmly stroking the ball into the back of the net.

United had a great chance to salvage a point in the 87th minute but Niskanen pulled his shot wide.

Dundee United now go to Rangers at 3pm on December 18, while Livingston host Ross County at the same time.