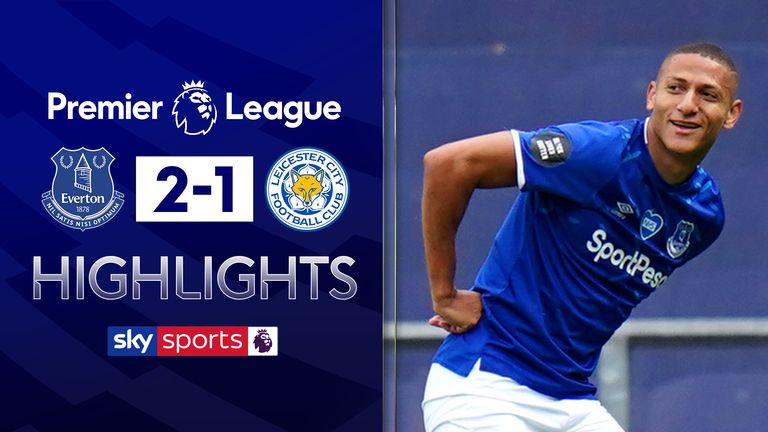 FREE TO WATCH: Highlights from Everton's win against Leicester in the Premier League

Leicester's hopes of a top-four finish in the Premier League were hit by a 2-1 defeat at Everton on Wednesday night, despite a second-half fightback from the Foxes.

Richarlison put Everton ahead with just 10 minutes on the clock and Gylfi Sigurdsson doubled their advantage from the penalty spot six minutes later after a long VAR review eventually punished Wilfred Ndidi's handball.

However, Leicester responded after the break and pulled one back when Mason Holgate's clearance went in off sub Kelechi Iheanacho (51) but couldn't find a second, despite dominating possession and territory at Goodison Park.

The result leaves Leicester, who are yet to win since football's restart, still in third but just one point ahead of Chelsea - who later suffered a surprise defeat at West Ham - and two points ahead of Manchester United in fifth and Wolves in sixth. Everton move up to 11th.

How Everton added to Leicester's problems...

A Leicester side clearly keen to put their poor form since the return behind them made a bright start at Goodison Park, with Youri Tielemans close to finding Jamie Vardy inside the opening two minutes.

But that was about as good as it got. Within minutes Anthony Gordon had been set away on the left and his pull-back found a totally unmarked Richarlison to blast beyond Schmeichel from eight yards.

Shellshocked Leciester were two behind six minutes later, thanks to a penalty which took VAR more than two and a half minutes to eventually judge Lucas Digne's free-kick had struck Wilfred Ndidi's raised arm in the box. It was Everton's first spot kick of the season, but the restored Sigurdsson made no mistake of it to double the Toffees' lead.

The now routine drinks break midway through the half finally provided Leicester with a chance to regroup, and they certainly took it. Right from the restart they looked rejuvenated and deserved a goal back before half-time, with Jonny Evans denied by Pickford and Marc Albrighton by a close-range Digne block.

Leicester stepped up their resurgence after the interval and pulled a goal back when Mason Holgate cannoned his clearance into Iheanacho and past Everton 'keeper Pickford.

The visitors almost got another helping hand on the hour mark when Pickford's failed pick-up saw Michael Keane almost turn into his own net before the Everton defender deflected James Maddison's strike over the bar.

It was then Iheanacho's turn to blaze over after more unconvincing goalkeeping from Pickford but with boss Carlo Ancelotti sending on Yerry Mina to go to three-at-the-back and Tom Davies adding numbers in central midfield, Everton closed down the space and saw out the victory.

Everton manager Carlo Ancelotti: "It was an important result and performance, the second half was so difficult playing against a really strong team with good quality and organisation. 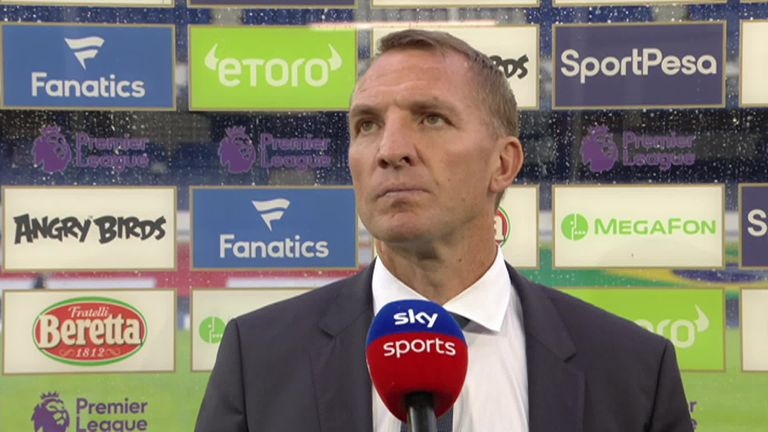 Leicester City boss Brendan Rodgers remained fairly upbeat after the Foxes' 2-1 defeat to Everton, insisting his side are still in a fantastic position but must change their form around

"We started the game well and were 2-0 up, but after that we thought more about defending than attack, but that's absolutely normal because the three points were really, really important.

Leicester boss Brendan Rodgers: "The start was strange, we had control of the game and gave away a soft first goal, the second one is very unfortunate, it's very harsh to concede. 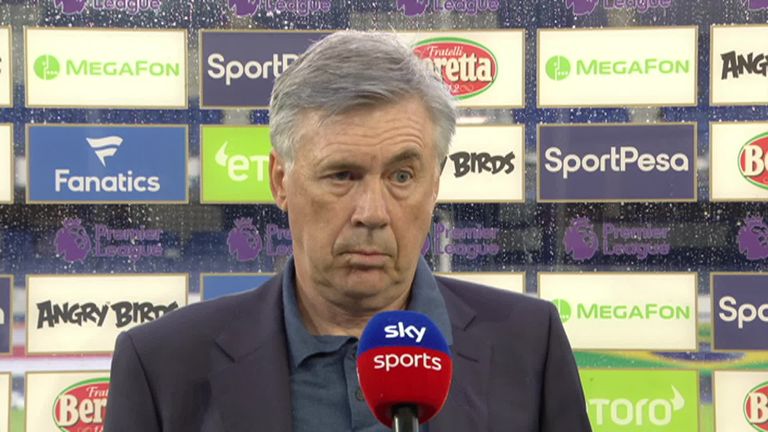 "In the situation to be 2-0 behind, it was going to be tough. We made changes at half-time to try to energise the team, and I thought we were much better in the second half, but it's easy at 2-0 down.

"James Maddison was outstanding in the second half, Kalechi Iheanacho too, and we looked like we could get something but we just needed a little bit more composure in the last 10 or 15 minutes. That'll come with experience, they're a young squad.

"We're still in a good place, but we need to find and fix the issues that we have at the moment if we're going to finish where we want to."