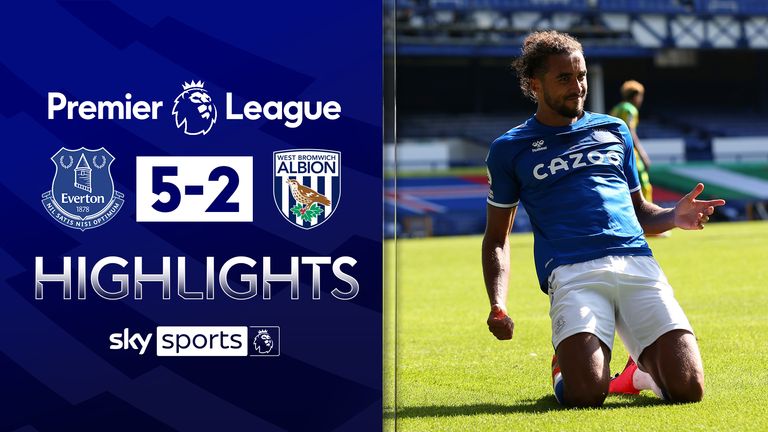 FREE TO WATCH: Highlights from Everton's win against West Brom in the Premier League

Dominic Calvert-Lewin scored a hat-trick as Everton beat West Brom 5-2 in an incident-packed Premier League encounter, with Slaven Bilic and Kieran Gibbs both sent off at the end of the first half.

It had been a bright start from the Baggies when Grady Diangana (10) put the visitors ahead early on but Calvert-Lewin (31) netted his first of the afternoon not long after when his backheeled finish was given after a VAR review.

James Rodriguez impressed on his Everton debut last weekend and it was more of the same on his first home outing, putting the hosts ahead just before half-time with a precise finish (45). Mere seconds later, James was involved in an off the ball incident with Gibbs, who was shown a straight red card for lashing out at the Colombia midfielder and catching him in the face.

He was quickly followed by manager Bilic, who had confronted referee Mike Dean on the field at half-time to protest the sending off, but was soon shown red himself and watched the second half from the stands.

It looked like West Brom might give it a good go in the second half - despite being a man and manager down - as Matheus Pereira (47) curled home a sumptuous free kick. But the Baggies were beaten back by a close-range strike from Michael Keane (54) and two quickfire Calvert-Lewin goals (62, 66) as the striker completed his hat-trick, taking his tally to four goals in two Premier League games thus far.

It was an incredibly quick start at a sunny Goodison Park - both teams going close inside five minutes - but it was West Brom who snatched the early advantage. Summer signing Diangana almost ran the entire length of the pitch and was afforded plenty of space as Everton stood off him. It was almost inevitable once he reached the top of the area that he would score, sweeping home to his right, just past the outstretched fingers of Jordan Pickford.

Both sides went close to scoring the next in an intense first half. On the 15-minute mark, Calvert-Lewin produced a wonderful turn and shot in a small space but it just wriggled past the past post. Not long after, Jake Livermore hammered a shot onto the post that would have had Pickford well beaten.

Man of the match: James Rodriguez.

But Calvert-Lewin hauled Everton level just after the half hour with his first goal of the afternoon, but it came with a VAR check. Seamus Coleman - who looked sharp on his 250th Premier League appearance for Everton - pinged a cross into the area, that flew over the head of Richarlison before hitting Darnell Furlong on the back. The ball then landed at the feet of the England striker, who backheeled it home from inches away.

The linesman initially had his flagged raised for offside against Calvert-Lewin, but VAR had a look and found that Furlong was playing the Everton striker onside and his instinctive finish rightly stood.

After a bright start, West Brom capitulated at the end of the first half. It started with James' first Premier League goal on the stroke of the 45 minute mark. After some wonderful work from Richarlison, he picked out the Colombia international at the top of the area. James then took a touch to shift onto his dangerous left foot before hitting a low, hard shot through a sea of West Brom defenders.

The summer arrival was in the middle of the controversy soon after too as Gibbs saw red. James nudged the defender in the shoulder off the ball, and it was a petulant reaction from Gibbs as he lashed out and caught the Everton midfielder in the face. It was a straight red card for the former Arsenal defender and he was soon followed by manager Bilic, who confronted referee Dean on the pitch at half-time and was send to the stands.

But despite a tumultuous end to the first period, West Brom equalised immediately after the break with a world-class free-kick from Pereira. He sent a curling, thunderbolt set-piece into the far corner with Pickford unable to do anything about it - but that's where the Baggies' comeback ended.

Keane netted for a second successive game - having scored against Salford City in Everton's midweek Carabao Cup win - to see the hosts ahead again. It was superb free-kick delivery from Lucas Digne once again, with Richarlison's initial header saved well by Sam Johnstone. But unfortunately for the goalkeeper, the loose ball landed to Keane who poked home from point-blank range.

West Brom were then hit with a double sucker punch from Calvert-Lewin as the striker rounded off his hat-trick. His second of the afternoon was similar to his opener, lurking inside the six-yard box to poke home a Richarlison ball across the face of goal after the Brazil forward was found by a wonderful, chipped pass from James.

The treble-clinching goal was arguably a bit of a surprise for Calvert-Lewin as he turned home James' corner via the top of his back, but he will hardly be complaining as he races into the lead for the Premier League Golden Boot ahead of the remaining games this weekend.

Man of the match - James Rodriguez

What a signing James has been so far and he thoroughly deserves to take home this weekend's crown. He made crosses and passes throughout of real quality - perhaps only one towards the end of his 78 minutes could have been considered as 'below par', but even that was still quite good.

He picked up an assist for Calvert-Lewin's hat-trick goal and a second assist after his sublime pass found Richarlison before Keane scored the rebound.

Among this too, he scored his first Premier League and Everton which again showed his world-class quality. It was the finish of someone who knows where the goal is as his low drive squeezed between three West Brom defenders - no mean feat.

Manager Carlo Ancelotti said after the game: "He is comfortable with the team and everything is OK. In this moment he is using his quality. This is the quality I saw at Madrid and the same quality I saw at Bayern.

"The quality of James makes him play easy. His football is not so complicated because when he gets space he likes to use his quality on passes and when he has no space and is under pressure he tries to play simple.

Of course, credit must also go to Calvert-Lewin and Richarlison but James was the creative spark that Everton were looking for and there is still plenty for to come from the Colombian. What an exciting prospect.

Everton manager Carlo Ancelotti: "I think the result doesn't reflect what really happened on the pitch because honestly, in the first half, they were better than us. They played well at the beginning, I think we had a good reaction after the goal we conceded and of course, with 10 men, we had one advantage in the game. It was easier in the second half.

"I have seen more ambition and motivation [since returning from the summer break], more focus. At the moment, it is good but we have to pay attention because every game can be difficult. This is a good test for us today, everyone will be happy because we have a great result but if you look inside the performance, there are a lot of points where we can do better. But after two games, it is normal that everything is not perfect."

West Brom manager Slaven Bilic: "It affected the game massively. To go 2-1 down and one man down is very difficult.

"We have only ourselves to blame. Kieran did a couple of mistakes. He stayed on his feet [when Rodriguez connected with him] and then reacted so he did not give the referee any other option but to give him a red.

"If he was more savvy, if he had gone down after James had touched him, but he took the worst option by not going down and then reacting with his hand. If you do that, especially to a player who is waiting for that, it is a straight red.

"As a manager I should be in a situation to ask the referee what's going on. I didn't swear. I asked him in a frustrated way but I didn't go over the line but he just ignored me and gave me red. I told him if you want to kill us, kill us. That's all."

Everton will be live on Sky Sports this week when they travel to Fleetwood Town in the Carabao Cup on Wednesday (kick-off 7.45pm). They will then travel to Crystal Palace in the Premier League next Saturday (kick-off 3pm).

West Brom are also in Carabao Cup action on Tuesday when they host Brentford (kick-off 7pm), before welcoming Chelsea to The Hawthorns next Saturday in the Premier League, live on Sky Sports (kick-off 5.30pm).