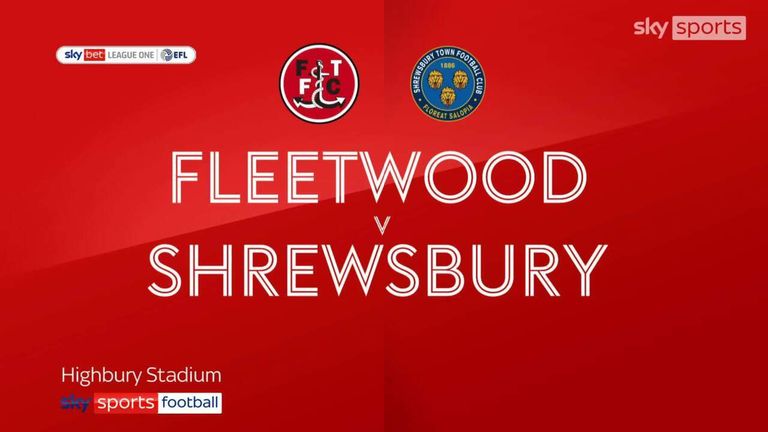 Highlights of the Sky Bet League One game between Fleetwood Town and Shrewsbury Town.

Tom Bayliss' wonderful strike into the top corner was enough for Shrewsbury to win 1-0 at Fleetwood.

After an uneventful first half-hour, Bayliss hit a fine goal to put the Shrews ahead. Christian Saydee drove at the defence and, when the ball fell for Bayliss at the edge of the box, he curled in a sweet finish.

Shrewsbury should have doubled their lead before the break but Taylor Moore and Luke Leahy wasted chances and, when Leahy slid in Rekeil Pyke, Fleetwood goalkeeper Jay Lynch was out quickly to block.

Fleetwood came close to an equaliser at the end of the half but Shaun Rooney's fierce hit was well saved by Marko Marosi.

The hosts began the second half brightly but Carlos Mendes Gomes and Callum Morton both fired wide and a fizzing effort from Danny Andrew took a deflection and crashed against the crossbar.

Andrew hit the bar again with a curled corner and, with 15 minutes left, Mendes Gomes rounded Marosi but saw his finish cleared by Moore's last-ditch slide.

Shrewsbury were unable to make what was a feisty end to the game, which saw visiting physio Dan Green sent from the touchline, more comfortable as Jordan Shipley's effort crashed against the inside of the post but they were able to see out the victory.