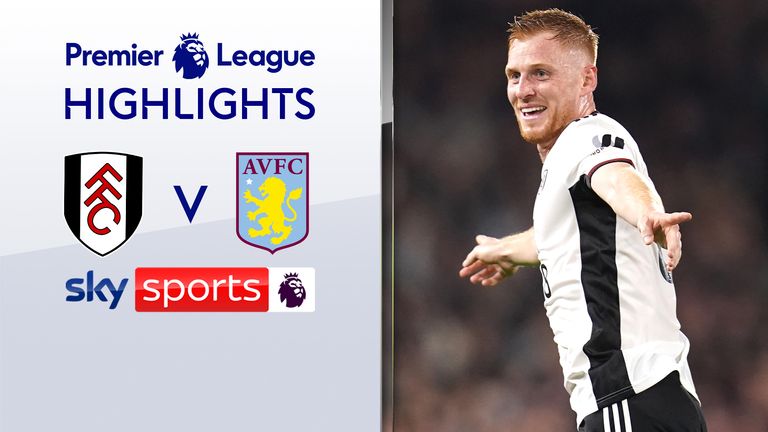 FREE TO WATCH: Highlights from the Premier League match between Fulham and Aston Villa

Harrison Reed, Aleksandar Mitrovic and a Tyrone Mings own goal saw Fulham romp to a 3-0 win over Aston Villa which saw Steven Gerrard sacked barely an hour after full-time.

Villa were booed off at half and full-time by their frustrated sell-out travelling support at Craven Cottage, with chants of "We want Gerrard out" audible from the away end for large periods of the second half on a wretched night for the 10-man Villans in the capital - and by 10pm, they had got their wish.

Gerrard's side were already three games without a win and were outplayed throughout their trip to west London, but still hung on until the 36th minute when Reed's wonderful 20-yard strike arrowed past Emiliano Martinez.

Minutes later Mitrovic would beat Martinez from 12 yards after Matty Cash was penalised for a handball, and by the time Mings turned Neeskens Kebano's cross past into his own goal with seven minutes left, a frustrating evening for the visiting fans had already turned toxic and left Gerrard out of a job after less than a year in charge at Villa Park.

How Gerrard's problems became insurmountable as Fulham romped to victory

Aston Villa had promised improvement after a strong showing against Chelsea on Sunday, but they were a yard off Fulham from the first whistle and needed a Mings clearance off his own line to stop Mitrovic giving the hosts a deserved early lead.

The Cottagers continued to bully their visitors in open play and from set-pieces, and as half-time approached the only question was whether the scoreline would reflect their domination at the break.

Reed made amends for their profligate opening with time running out, taking Martinez's punch from a corner before smashing it back past him from just outside the box.

The goal did spring the visitors into some form of life, but only to twice force Leno into relatively routine saves. Gerrard had seen enough, and hooked Ezri Konsa for Cash at the break.

Fulham continued to press for the next goal, but the precarious nature of a one-goal lead always threatened them, until Luiz's moment of madness.

A late challenge from Mings on Willian saw the defender rightly booked but away from the action, Luiz and Mitrovic squared up to one another and once the Brazilian leaned his head forward and made contact, VAR was always likely to intervene.

Man of the match: Aleksandar Mitrovic

The big striker was fortunate to see his resulting penalty squirm under Martinez's body and in, but Villa's luck was firmly against them.

So too were their fanbase against their manager by this point, as the visiting supporters increasingly began to join in with Fulham's chants of "sacked in the morning", before adding their own chorus of songs to make their feelings known.

That run of poor fortune was nearly as bad as their performance and contrived to serve up a late third for the hosts, as Kebano skinned Cash down the wing before his low square ball deflected in off Mings.

Stony-faced Gerrard did not acknowledge the Villa fans who had remained until the bitter end, and he would not have liked what he heard from them had he done so as the pressure surrounding him ramped up to another, this time insurmountable, level on his final night in charge.

Analysis: Writing on the wall for Gerrard after latest backwards step

"Tell me your game plan hasn't worked without telling me. Steven Gerrard made one change at Fulham from the encouraging defeat by Chelsea on Sunday, bringing in Jan Bednarek for Matty Cash. Forty-five minutes into this nightmare evening at Craven Cottage, he swapped them back over.

"It was a striking example of a night where Gerrard's set-up unravelled. But in the end, so too did his spell at Villa Park after a defeat which begged one too many questions about where his often rudderless squad were heading.

"Villa have lost key figures to injury but that does not explain their rot, losing six of their 11 league games in 2022/23. They had enough about them to produce everything but the final ball against Chelsea on Sunday. At Fulham, they struggled to get out of their own half for long periods.

"Neither is their poor form a recent problem. Villa have won two of their 11 games this season, and two of their final 11 games in the last campaign, with Gerrard often clearly struggling to define the style or formation of his admittedly unbalanced squad.

"Gerrard's mood inside what turned out to be his final press conference had a feeling that he was resigned to his fate - the manager himself would not quit, but even he could not bring himself to explain why he was the man to turn things around.

"Clearly it was not a question Christian Purslow or the Villa board could answer either. By the time the team coach departed Craven Cottage, Gerrard's future had been sealed.

"The man lauded for his incredible unbeaten season at Rangers only 17 months ago was left to ponder his next move, with his stock considerably lower at the end of a notably underwhelming spell."

Then-Aston Villa manager Steven Gerrard in the final press conference before his sacking:

"The performance was miles away from what I want, expect and stand for. I understand the fans' frustration and it was so far from how we looked at the weekend. We're in this situation, I'm in it to face the tough questions because the reality is it's not good enough for the club.

"Those decisions are out of my control. I have been around the game a long time, I understand the situation and won't sugar coat the situation or give anyone false lines. I want to be as honest as I can.

"I've sent messages to the fans for the last few weeks because I share their frustration and pain. I'm honest and know they're not enjoying it at three moment, I'm certainly not, but you and I know I'm in a very difficult position at the moment."

Silva: A perfect night for us

"The way we were so dominant, started the game on the front foot, and the quality of our game in the first half, we started being dominant every time, the chances we created from the first minute was really good to see.

"The second half was more or less the same, after the red card the game started to be different and we controlled things. It was important for us to win and keep a first clean sheet at home this season, it's something we've been talking about and finally we have done it. It's really important for us, and it's the perfect night.

"I spoke to [Steven Gerrard] after the game, as we do usually after the game. All the managers feel under pressure, in some moments of the season when results aren't coming the pressure is there. But all of it, we have to see it as a privilege, we're working in the best and most difficult competition in the world. Every single match is a great challenge ahead of us, and it has to make us stronger and I'm sure that's what will happen with Steven.

"I think he said the right thing before the match when he was asked about the situation, he said these moments will make him work with more motivation.