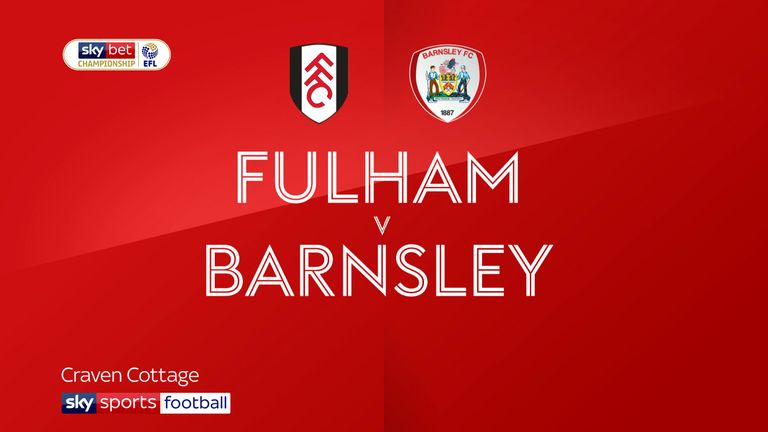 Highlights of the Sky Bet Championship match between Fulham and Barnsley.

Cauley Woodrow delivered a blow to former club Fulham's promotion challenge as he scored twice in a 3-0 win which keeps alive Barnsley's hopes of pulling off an unlikely survival bid.

Gerhard Struber's side arrived at Craven Cottage positioned at the foot of the Championship table and having collected just one point from their previous five games.

But Woodrow's first half penalty and excellent late strike, together with Jacob Brown's goal early in the second half, ensured the Tykes staged a repeat of their opening weekend victory over Scott Parker's high-flying side to claim only their sixth win of the season.

Struber had insisted this week his side could still stay up despite being left nine points from safety following the midweek loss to Birmingham.

It was clear there was no lack of belief among his side as they took the game to a Fulham side hoping to climb into the automatic promotion places.

Conor Chaplin and Woodrow - who completed a permanent move to Barnsley from Fulham last summer following a season-long loan - produced the first shots of the game as the visitors were quicker to adapt to the testing conditions.

The breakthrough came in the 24th minute when the Fulham defence was undone by a long ball forward.

Alex Mowatt hit a raking pass towards Brown after Fulham's Anthony Knockaert had lost possession inside the Barnsley half.

Marek Rodak appeared to have the danger covered but the keeper spilled the ball and then held on to Brown as he tried to recover his error, conceding the penalty that was calmly converted by Woodrow.

The Cottagers offered little by way of response during the remainder of the half before finally displaying more intent after the restart when Aleksandar Mitrovic got his first clear sight of goal.

The striker, who had scored his 21st league goal of the season in the midweek draw at Millwall, found space on the edge of the area to turn and shoot but was denied by the legs of keeper Brad Collins.

The home side's hopes of a revival, though, were quickly cut short when Brown added a second in the 51st minute.

Parker's side had already been exposed when Rodak was forced to dash off his line to save after Chaplin had been sent clear.

But the keeper was badly caught out when he raced out of his box in an attempt to reach Woodrow's 50-yard pass ahead of Brown.

The Barnsley forward was first to the ball and lifted the ball over the keeper to score from 25 yards.

Fulham began to dominate possession as they attempted to gain a foothold in the game but Woodrow wrapped up the win in the 79th minute when he rounded Michael Hector and fired in a low, angled shot that beat Rodak at the keeper's near post.

"But these things can sometimes happen and we need to reboot and learn from them. And the most important thing is to keep going, keep being strong characters in the changing room and don't dwell. There are no excuses. We were beaten by a better side today, a side that had more intensity and we were second best really. We didn't deserve anything out of the game."

Barnsley's Gerhard Struber: "I think the last few days was a big challenge for us, especially being at the bottom of the table and the last game was not a big highlight for my team. It was a very, very important win for my team and gives my team and staff a good mood to fight in the next few days and prepare the team for the next challenge against Middlesbrough.

"The gap is six points now and I think if we can reproduce this style in the next few weeks it won't be easy for any team we play. We don't look at the table. The only thing we can influence is our performance in the next game and we need the right atmosphere."