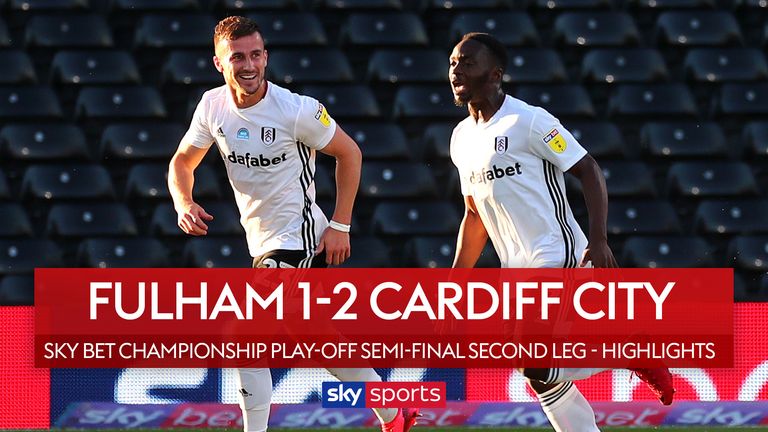 Highlights of the Sky Bet Championship play-off semi-final between Fulham and Cardiff.

Fulham will play Brentford in the Championship play-off final after edging past Cardiff despite defeat in the second leg at Craven Cottage.

Cardiff were aiming to become the first side in Championship history to overturn a two-goal deficit from a semi-final first leg, and they went close to doing just that with a 2-1 win on Thursday night, but eventually succumbed to a 3-2 aggregate defeat.

Curtis Nelson scored early to give Cardiff hope, but they conceded a leveller on the night within a minute as Neeskens Kebano struck - adding to his impressive free-kick at the end of the first leg that proved so vital in this tie.

Lee Tomlin then put the Bluebirds back to within a goal of parity, but Fulham held on to seal their spot at Wembley, where they will face their fierce west London rivals Brentford on Tuesday night - live on Sky Sports Football from 7pm (kick-off 7.45pm).

Fulham triumph despite defeat at the Cottage

Cardiff would have been dreaming of a bright start to give themselves some hope in the tie, and they got just that after eight minutes. Fulham failed to deal with a corner into the heart of their area, and Nelson rose to nod home.

Their optimism would last less than a minute, however. Just 24 seconds after the restart and Fulham restored their two-goal advantage in this semi-final. Bobby Decordova-Reid was afforded far too much space in the right channel to cross low for Kebano, who continued his excellent recent form with a low strike past Alex Smithies.

Neil Harris reacted at half-time to try and get Cardiff back into the game, throwing on Nathaniel Mendez-Laing and Tomlin, and immediately the pair combined to get Cardiff to within a goal of Fulham again. With 47 minutes on the clock the home side failed to deal with another long throw, Mendez-Laing then saw a header saved, but Michael Hector's failed attempt at a clearance fell perfectly for Tomlin to volley in from close range.

Cardiff pushed for an equaliser and went so close to getting it on 72 minutes. Fulham had Marek Rodak to save as he denied Mendez-Laing from point-blank range, before reacting quickly to tip over a stinging Will Vaulks volley.

But there would be no comeback in the end, as Fulham held on to reach the final and keep their dream of an immediate return to the Premier League alive. 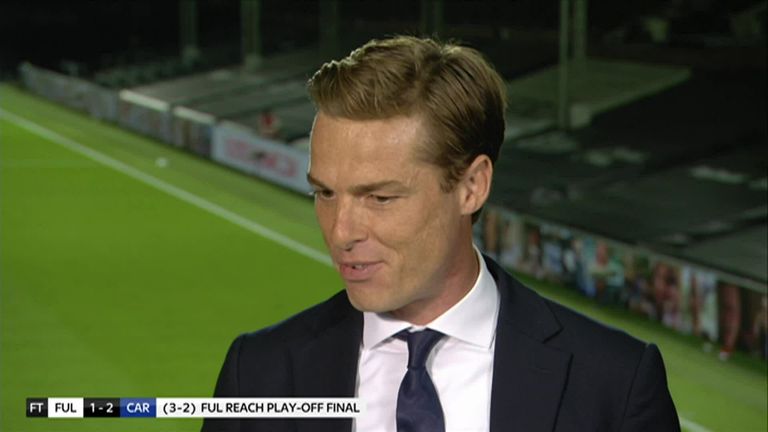 Fulham's Scott Parker claimed he was disappointed with the performance from his side in their defeat to Cardiff. However, they have done enough to book a spot at Wembley for the Sky Bet Championship play-off final against rivals Brentford.

Fulham's Scott Parker: "I think the way the game panned out tonight was not how I expected, but at the same time, I realised the task ahead of us today. Cardiff were a team wounded from the first leg that came in and had nothing to lose. They put us under an incredible amount of pressure at times and we didn't really put a stamp on our game. We've got ourselves to the Championship play-off final and it's up for grabs.

"That was our 48th game tonight and I told the players to not lose sight of what we've done. We live in a world where you can quite easily lose sight of achievements and I sense a little bit of disappointment. We've got a massive game coming up on Tuesday. It's going to be a totally different game from what we've seen tonight. We need to stay bright, we need to stay positive. 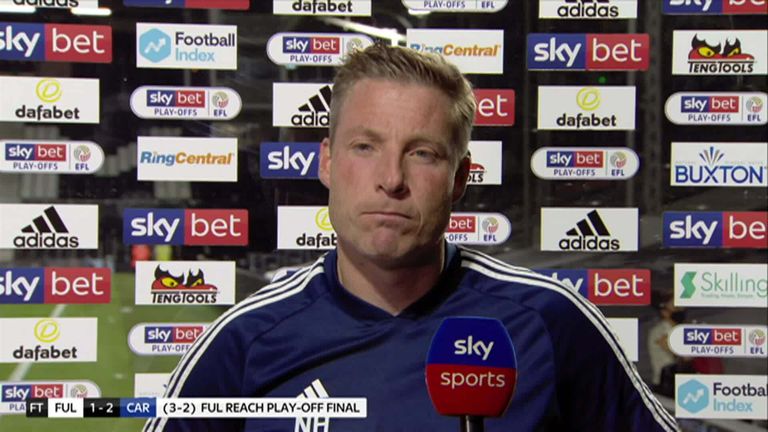 Neil Harris said he's proud of his Cardiff side for their performance in the second-leg of the Sky Bet Championship play-offs, the Welsh side won 2-1 but lost out to Fulham 3-2 on aggregate.

Cardiff's Neil Harris: "It's not just tonight [that I'm proud]. Since the moment I came into the building, the performances, the way they've improved, the way they've taken on board what we want, the hours on end learning on TV screens, on the training pitch to get us to where we are tonight.

"To come and win 2-1 at Fulham in the scenario we were in after losing 2-0 at home, I can't be any prouder. The players have been class for me. We've come up against a very talented Fulham side tonight and there are two very good sides in the final.

"I'm at a club that craves top six football in the Championship and Premier League football. We feel like the capital city of Wales should have a team in the Premier League and we have to earn the right to get there. However proud I am, I'm gutted that we haven't got through but I've said to the players that they have to be so proud of what they've achieved and we have to be even better next year."

Analysis: So close for Cardiff; Fulham will be relieved

"Cardiff - what a performance. They did everything but score [again]. Fulham survived that and you can tell from the body language of the Fulham players compared to Brentford's elation, it's just pure relief for them. Cardiff pushed them so far and for them to do that after going 2-0 down in the first leg and playing away from home shows the character and resilience of Neil Harris' men.

"Scott Parker is going to be one relieved man because it was an absolute bombardment with long throws and set plays but they got the job done and now they're one game away from the Premier League."

"[Parker] will be trying to offset that disappointment because there was that look from some of the players because they lost tonight. But they're through. That's the difference with play-off games, it's about being the better team over two legs, getting through it and getting to Wembley.

"Parker will want to move past this performance, which for large spells wasn't at the level that he would want. But the result is the most important thing in these semi-finals and I'm sure that's what he will be saying afterwards."

Man of the Match - Tom Cairney

It was an ugly performance from Fulham, in truth. Cardiff were excellent and the home side had their backs to the wall for large swathes. Whenever they did get forward, though, Cairney did all he could to give them breathing space in the tie. He created a load of chances and will hope to have Aleksandar Mitrovic back on the end of them in the final.

When is the Championship play-off final?

Fulham will take on Brentford in the Sky Bet Championship play-off final at Wembley on Tuesday, August 4. Coverage starts at 7pm on Sky Sports Football, ahead of a 7.45pm kick-off.