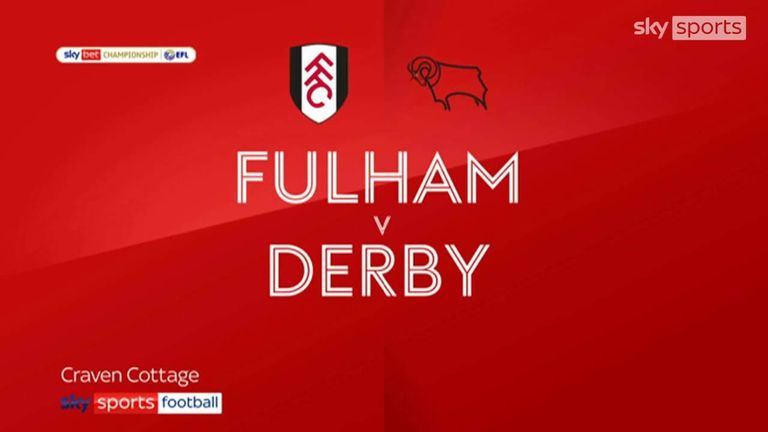 Sky Bet Championship leaders Fulham were unable to make up for the absence of 21-goal top scorer Aleksandar Mitrovic as they were held to a 0-0 draw by bottom club Derby at Craven Cottage.

Marco Silva's side were seeking an eighth successive win but they were denied by Wayne Rooney's determined side, who followed up Sunday's victory over Bournemouth with another impressive display.

The draw means they have taken four points from the Championship's top two teams since they were hit by a further nine-point deduction that left them on minus-three points last week.

Fulham, meanwhile, were left frustrated at their failure to make more of a succession of good chances.

The Cottagers had moved top after victory over Barnsley on Saturday but their hopes of consolidating their position at the top of the table were not helped by the unexpected absence of Mitrovic, Tom Cairney and Marek Rodak who had all featured in the weekend victory over Barnsley.

The enforced changes appeared to have little impact on Fulham as they started the game on the front foot.

And it took them just two minutes to find a way through the Derby defence and create an opening for Fabio Carvalho, who placed his shot narrowly wide.

Fulham have typically dominated possession at Craven Cottage this season and this was no exception.

Without Mitrovic, however, they lacked their usual attacking threat and while Derby's Kelle Roos was the busier of the two goalkeepers, he remained largely untroubled for long periods.

Jean Michael Seri was Fulham's most influential player during the opening 45 minutes and the midfielder was unfortunate to see a long-range shot rebound to safety after striking the bar with Roos well beaten.

But while Fulham frequently worked their way into their opponents' penalty area, they lacked the cutting edge to make the breakthrough.

And Derby's ability to cause problems on the counter-attack meant Silva's side could not afford to lose concentration.

Rams skipper Tom Lawrence - who scored twice in the defeat of Bournemouth - was a constant threat and twice forced Fulham 'keeper Paulo Gazzaniga into hurried saves at the both ends of the first half.

Fulham clearly needed to up their efforts after the break and there was a greater urgency to their play.

Carvalho shot wide shortly after the break before Harry Wilson linked with Kenny Tete to set up Kebano, who was once again closed down by determined Derby defenders before he could shoot from close range.

The visitors defended impressively but they were fortunate to escape in the 58th minute when Carvalho moved on to a loose ball and struck the post from 10 yards out.

Fulham's Marco Silva: "Mitro and Tom Cairney are ill. Some of the others like Harrison Reed, Harry Wilson and Bobby De Cordova-Reid have also been ill with a fever. Nothing to do with Covid but we have six or seven players affected, some who could play tonight and some who couldn't. With Marek, he has been told there was someone on the plane had Covid when he came back from internationals. If the game had been later tonight he could have played. It's a strange situation but there is a protocol and we respect the situation."

Derby's Wayne Rooney: "It is a good point, a very difficult game against one of the best teams in the division. We could have nicked it maybe on another day but I think a point was probably a fair result. After the last week to get four points against Bournemouth and Fulham, they deserve credit for that. It's been a tough week off the pitch but they keep coming in and working hard.

"And I am delighted for them because They are getting the recognition and the praise they deserve for handling the situation. I give the players big demands every day and they haven't let me down one bit. We'll keep fighting and pushing, you never know even if there's a small chance of staying up."