Rarmani Edmonds-Green and Georgie Kelly scored the goals as Rotherham finished second in League One, two points behind champions Wigan and one ahead of third-placed Wigan; Gillingham are relegated after finishing behind Fleetwood on goal difference Highlights of the Sky Bet League One match between Gillingham and Rotherham United.

Rotherham secured automatic promotion from League One after a 2-0 win over Gillingham, who were relegated on goal difference.

Rarmani Edmonds-Green opened the scoring in the 34th minute and substitute Georgie Kelly made sure of the result in the final minute, sparking wild celebrations in the away end.

The result sees Rotherham finish second, two points behind champions Wigan and one ahead of third-placed MK Dons, who won 5-0 at Plymouth.

Gillingham are relegated on goal difference after finishing on the same points total as Fleetwood, who lost 4-2 to Bolton.

The Millers finally made their first-half dominance count when Edmonds-Green met Michael Ihiekwe's goal-bound header to poke home from close range after 34 minutes. 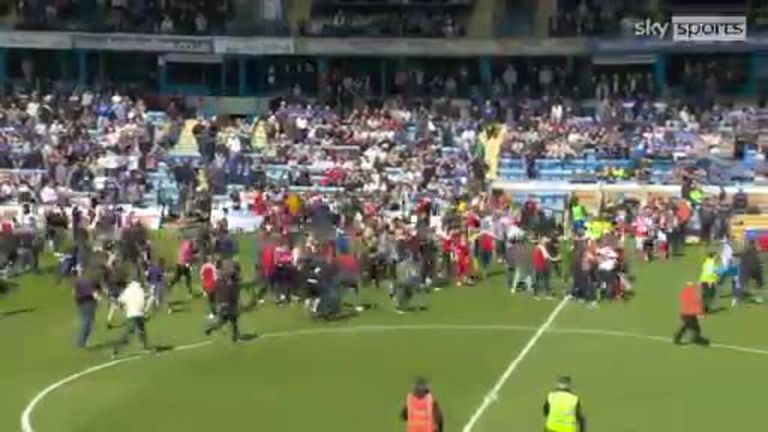 Rotherham fans storm the pitch at Priestfield whilst the Gillingham fans sit on and watch as they see their side relegated to League Two.

Ben Thompson beat the offside trap but his effort crashed off the underside of the crossbar in first-half stoppage-time as Gillingham came within inches of an equaliser.

A draw would have been enough to extend Gillingham's nine-year stay in the third tier but their survival hopes were dashed when substitute Kelly fired past the helpless Chapman at the death.