Guinea vs Gambia. Africa Cup of Nations Round of 16. 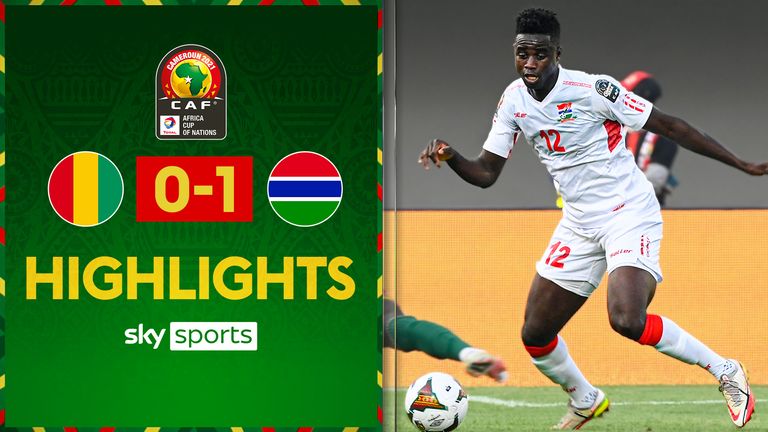 Highlights of the African Cup of Nations Round of 16 match between Guinea and Gambia.

Musa Barrow scored the winner as Gambia continued their AFCON journey by pulling off an upset 1-0 win over Guinea to advance to the quarter-finals.

Striker Barrow - one of the outstanding performers at the tournament - was set up by a defence-splitting pass from Yusupha Bobb, but still had to take the ball away from the Guinea defence with his right foot and then put it onto his left for a fine finish to settle the last-16 tie.

The small west Africa country are the lowest-ranked of all the 24 participants at the tournament in Cameroon at 150 in the world and are making their debut at the finals.

They will play the winner of Monday's later match between hosts Cameroon and the Comoros Islands.

Gambia hung on near the end as both teams finished with 10 men, surviving an offside goal, two strikes against the woodwork and a handball call to hold on for a famous victory.

They also overcome a bout of food poisoning in their camp which meant two players had to pull out of the starting line-up an hour before kick-off.

Guinea struggled without inspirational captain Naby Keita, suspended for the match after an accumulation of cards in the group stage, but did have the best of the first-half chances with Mohamed Bayo denied by Omar Colley's timely tackle.

Defender Ibrahima Conte had the ball in the net six minutes after Barrow's goal but Guinea had several players offside in the move and were denied an equaliser.

Gambia were then reduced to 10 men when Yusupha Njie was dismissed for a second bookable offence in the 87th minute. He had only been on the field for 15 minutes after coming on as a second-half substitute.

Conte then fired a shot against the post from a tight angle and the rebound was hammered back towards goal by Jose Kante, brilliantly saved by Gambia's German-born goalkeeper Baboucarr Gaye as he tipped the ball onto the post.

It came back goalwards a third time and looked to hit Colley on the hand but after consulting with VAR, the referee played on, with only enough time for Conte to earn a second yellow card and also be sent off.

While Guinea now exit the competition, Gambia will face the winner of the round-of-16 clash between Cameroon and Comoros at 4pm on Saturday, January 29, in a game live on Sky Sports.