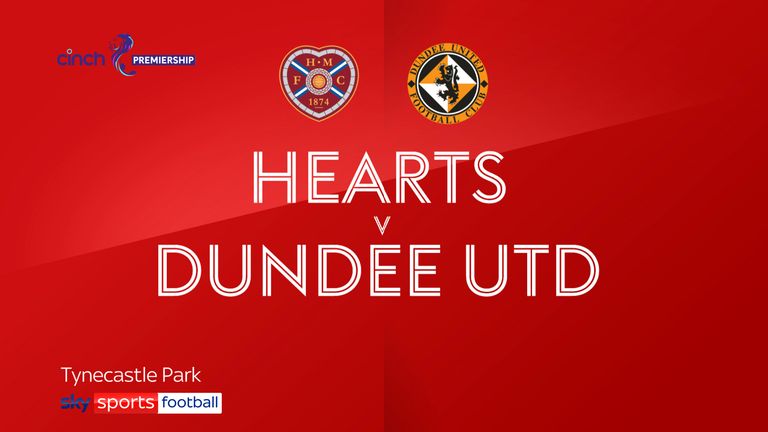 Highlights of the Scottish Premiership match between Hearts and Dundee United.

Alex Cochrane, Stephen Kingsley and substitute Aaron McEneff were also on target as Robbie Neilson's side moved three points ahead of their visitors and climbed above Celtic into second place in the cinch Premiership.

Hearts made three changes to the side that suffered a first league defeat of the season at Aberdeen last weekend as Michael Smith, Armand Gnanduillet and Gary Mackay-Steven made way for Taylor Moore, Woodburn and Barrie McKay.

There were three alterations to the United side that lost at home to St Johnstone as Louis Appere, Kerr Smith, Dylan Levitt and Logan Chalmers dropped out to be replaced by Ilmari Niskanen, Declan Glass, Kieron Freeman and Peter Pawlett.

United had the first attempt of the match in the 10th minute when Glass saw a shot from the edge of the box pushed behind by Gordon.

A minute later, Hearts threatened when Woodburn saw a shot from 16 yards out beaten away for a corner by Benjamin Siegrist.

The hosts made the breakthrough in the 22nd minute when Cammy Devlin slipped a pass through to Woodburn, who fired an angled shot across Siegrist. The 'keeper should have done better.

Three minutes later Hearts doubled their lead when Cochrane volleyed in a Josh Ginnelly cross after Siegrist had blocked a Devlin effort.

Craig Gordon made an incredible save on the half hour when he tipped over an effort from Nicky Clark which had bounced up off the turf following a dangerous Charlie Mulgrew free-kick.

The Scotland goalkeeper was beaten in the 34th minute, however, when Ryan Edwards' speculative low shot from 30 yards out took a nick off Kingsley and ended up in the net.

Hearts finished the first half strongly, with John Souttar heading over before McKay and Devlin were both denied by excellent Siegrist saves.

Five minutes after the restart Ginnelly got in behind the visitors' defence and was thwarted by another Siegrist block. The resultant corner, taken by Cochrane, eventually found its way out to Woodburn who arced a perfectly-executed shot into the top corner from just inside the box.

The visitors struck back in the 62nd minute when Clark nodded in a Freeman delivery from the right.

Hearts were playing some delightful football and Ginnelly and Beni Baningime both went close to restoring their two-goal lead before Kingsley eventually did when he stooped to head in a Cochrane free-kick in the 76th minute.

McEneff made sure of victory when he ran on to a pass from fellow sub Mackay-Steven and clipped the ball over Siegrist with four minutes left.

Both teams return to action after the international break, with Hearts visiting Motherwell on Saturday, November 20; kick-off at 3pm.