Report as early goals from Joe Aribo and Alfredo Morelos give Rangers a 2-0 win over Hearts, who were previously unbeaten at Tynecastle; Josh Ginnelly is sent off after half-time for the hosts, who also hit the bar twice and see Liam Boyce miss a fine opportunity 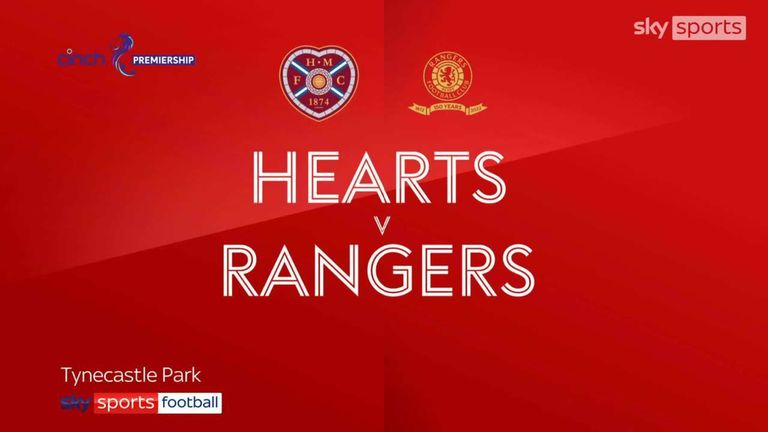 Highlights of the Scottish Premiership clash between Hearts and Rangers.

Early goals from Alfredo Morelos and Joe Aribo gave Scottish Premiership leaders Rangers a 2-0 win at Hearts, who lost at Tynecastle for the first time this season.

Hearts, who had won five and drawn three of their home league games before the lunchtime kick-off, flew out of the blocks and could have led inside two minutes through Liam Boyce's lob, but from Rangers' first attack after nine minutes Morelos fired home Fashion Sakala's cutback - and they never looked back.

Hearts had not trailed at Tynecastle for a single minute this season and were left stunned as Joe Aribo quickly made it two, taking down a long Connor Goldson pass before firing a powerful finish past Craig Gordon with 13 minutes played.

The hosts struggled to regain their momentum but rallied after half-time, striking the bar twice and watching on as Liam Boyce missing a gilt-edged chance, before Josh Ginnelly wasted any realistic hopes of a comeback with a stupid second yellow card for squaring up to Borna Barisic.

Rangers move seven points clear at the top of the Scottish Premiership table before Celtic play Motherwell later, when Well could reduce the gap to third-placed Hearts to two points with victory.

Hearts' sensational home form, with five wins and three draws from their opening eight games, suggested Rangers would have a tough afternoon on their hands, and the way the hosts started only strengthened that feeling, as Boyce looked to lift a bouncing ball over Allan McGregor but was denied by a fingertip save.

Rangers could barely escape their own half and faced a succession of corners - against the second-most efficient scorers from set-pieces in the division - but having survived them, opened the scoring from their first foray into the Hearts area.

A drop of the shoulder and turn was enough to get Kent away from Taylor Moore and although his cross was too high for Morelos, Sakala picked up the pieces and found the Colombian six yards out for him to bury the ball into the far corner.

Hearts were left reeling when that strike turned into a quickfire double four minutes later, as Aribo latched onto Goldson's driven long ball with a sensational touch, before beating Gordon with a similarly emphatic finish.

The hosts had not trailed at Tynecastle for a single minute in the league but now had a two-goal deficit to contend, and struggled to find a way through a Rangers side now content to remain compact.

Boyce did pull another strong save from McGregor after getting down the outside of Calvin Bassey, but they struggled to wrestle back their early momentum before the break, and after it took eight minutes to hit the woodwork - with a big slice of help from Bassey himself.

The makeshift centre-back slid in to meet Ginnelly's driven low cross from the right and diverted it onto his own crossbar, before Rangers missed two chances to add to their lead as Scott Arfield and Sakala were both kept out by Gordon.

Arfield had the keeper beaten moments later but with the goal at his mercy from Morelos' pull-back, fired wide with a shocking miss, before Boyce came close to rivalling him with a similar shank from eight yards, firing over the bar from Gary Mackay-Stevens' delivery.

With time running out, Stephen Kingsley ratted the woodwork from distance again from a sensational free-kick before Ginnelly's brainless decision to weigh into a dispute between Borna Barisic and Cameron Devlin, and was shown his marching orders for a second yellow card which effectively ended any hopes of a home comeback.

Ben Woodburn and Boyce forced late saves out of McGregor as Hearts continued to rally, but the game was already out of reach - and Rangers' lead at the top of the table extended to seven points.

Hearts are at Dundee on December 18 at 3pm, while Rangers host St Johnstone at 7.45pm on Wednesday.