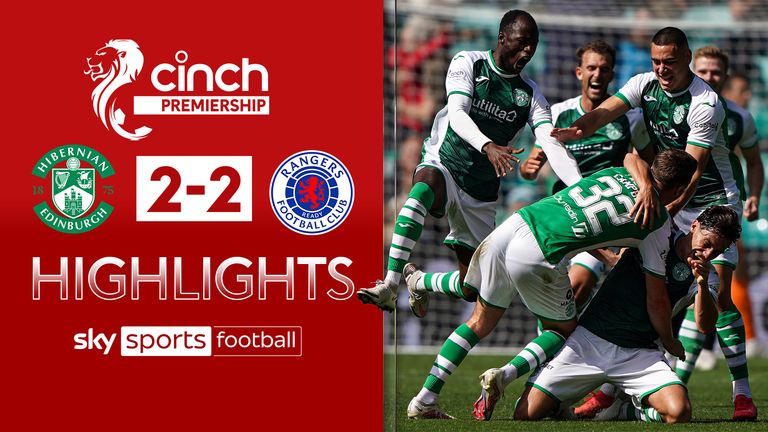 Highlights from the Scottish Premiership match between Hibernian and Rangers.

Following straight reds for John Lundstram and substitute Alfredo Morelos after the break, the hosts' dominance finally paid off.

Martin Boyle had cancelled out James Tavernier's penalty, before a Tom Lawrence header restored the lead for Rangers.

While Giovanni van Bronckhorst's side have dropped league points for the first time this season, Hibs claimed a dramatic late draw for the second home game running.

Man of the match: Boyle

Hibs boss Lee Johnson made four changes from the side that started the defeat at Livingston last weekend as Marijan Cabraja, Jair Tavares, Nohan Kenneh and Elias Melkersen dropped out to make way for Campbell, Rocky Bushiri, Martin Boyle and Jake Doyle-Hayes.

Despite having a huge Champions League play-off second leg coming up in the Netherlands on Wednesday, Van Bronckhorst made just two alterations to the side that began the 2-2 draw with PSV Eindhoven in the first match at Ibrox on Tuesday as Steven Davis and Malik Tillman were replaced by Ryan Jack and Rabbi Matondo. 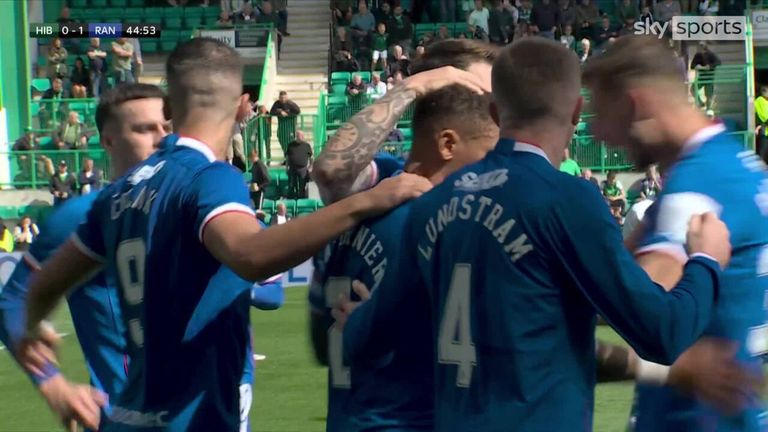 After a fairly even opening to the game, Rangers had the first notable chance in the 22nd minute but Antonio Colak was unable to keep his header down after being picked out on the edge of the six-yard box by a cross from Borna Barisic.

Johnson took a bold call in the 27th minute when he opted to make a double substitution, replacing Ewan Henderson, who had just been booked, and Paul Hanlon with Cabraja and Christian Doidge. 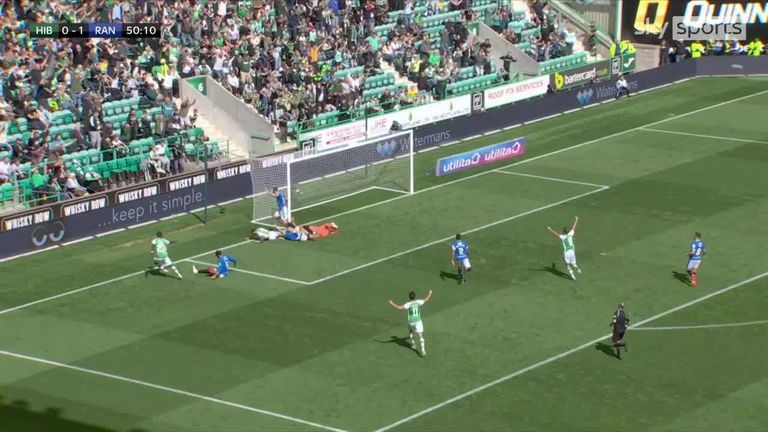 The visitors started to crank up the pressure towards half-time and Tavernier flashed a half-volley just wide from the edge of the box in the 42nd minute.

Rangers were awarded a penalty in the last minute of the first half when Colak fell in the box after being needlessly tugged by Bushiri while Hibs 'keeper David Marshall was in the process of clearing a passback.

The hosts furiously protested the decision but Tavernier kept his cool to slot home the spot-kick and give the visitors the lead. 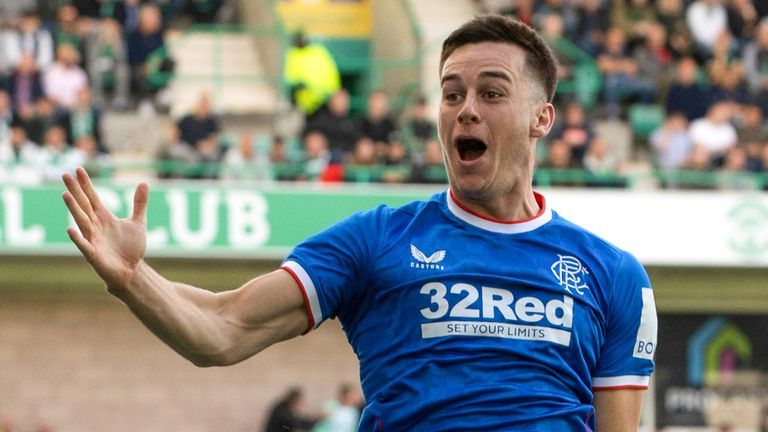 Hibs hit back five minutes after the break when Boyle nipped in between two Rangers defenders to knock the ball home from close range after Elie Youan had run on to a lovely pass from Campbell and sent in a low delivery from the left.

Rangers restored their advantage in the 58th minute when Lawrence powered home a header from a Barisic cross at the end of an excellent flowing attack. 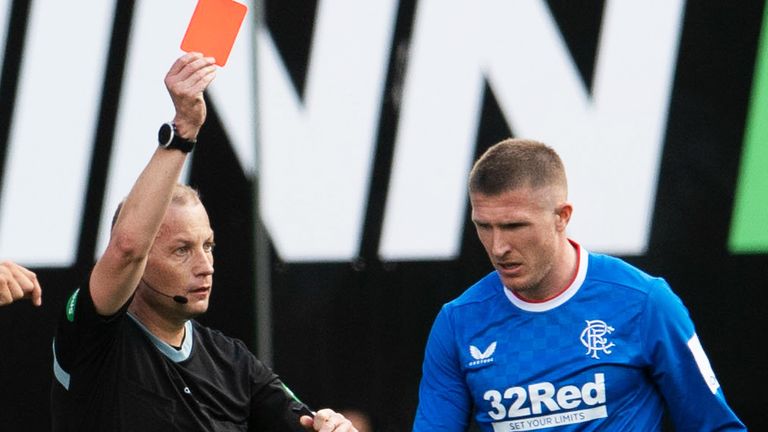 Things started to unravel for the visitors in the 66th minute, however, when Lundstram was shown a red card by referee Willie Collum after he cynically chopped down Boyle from behind while he tried to mount a counter-attack midway inside the Rangers half. 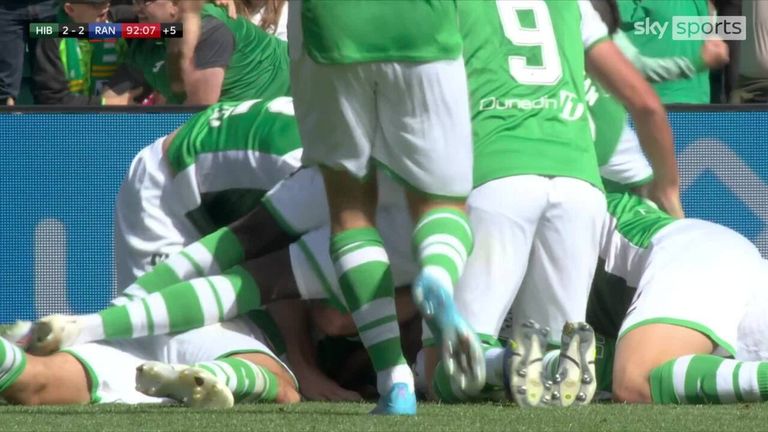 It got worse for last season's Europa League finalists in the 75th minute when striker Morelos, who had only come off the bench 13 minutes previously, was sent off for swinging an arm in the face of Cabraja. 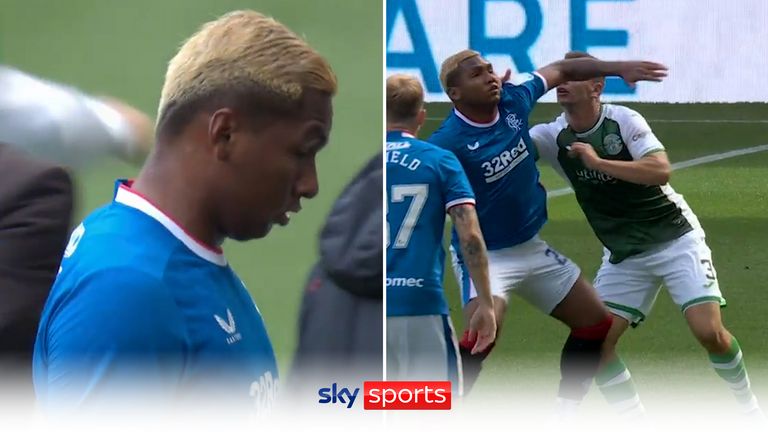 Hibs laid siege to the Rangers goal thereafter and eventually got their equaliser in stoppage time when Campbell - who scored a late winner in the opening-day win at St Johnstone - volleyed in from the edge of the box. 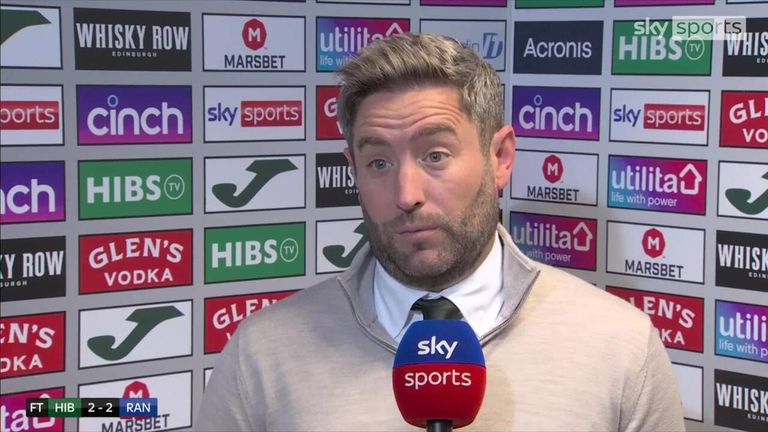 Hibernian manager Lee Johnson felt Rangers were awarded a soft penalty in their game and hopes the introduction of VAR will bring more consistency to refereeing decisions.

"It was dramatic and it needed to be dramatic. In the first half we didn't lay a glove on them but we set up in an aggressive shape and we made changes to make the most of us.

"In the second half, we really had a go. We left three up front and played a high backline. That led to incidents and goals which were a by-product of our aggressive play.

"If you give Rangers that penalty every time, there would be 100 penalties a week in this league. It was a very gentle grab of the waist.

"We needed that little bit of magic to get that equaliser and actually I thought there could've been a little bit more injury time too to help us get another few shots away." 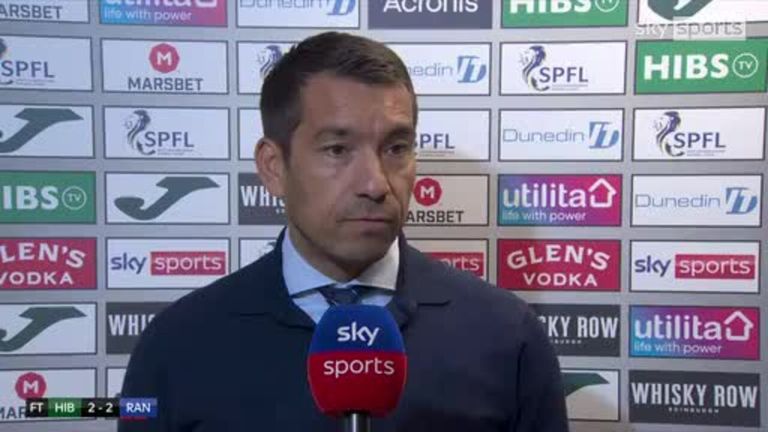 "It's a game where a lot of things happened and it was really physical.

"We were fighting to get the win and we nearly succeeded in getting away with the three points but in injury time Hibs just fell into the right position.

"We worked hard to deny them the goal but just fell short.

"In the first half I saw some passionate tackles and the ref decided whether they deem red or yellow cards.

"John Lundstram was unlucky to get the red card. I think it was a foul but the decision to give a red card surprised me.

"Morelos' red card is one I haven't seen back so we'll need to review that one.

"For our penalty, I saw Antonio try to press the goalie and it was a foul in the penalty box. I wasn't clear on the rules so had a discussion with the linesman to discuss whether or not it was a clear goal-scoring opportunity."

Rangers travel to face PSV Eindhoven in the second leg of their Champions League play-off before a home game against Ross County in Scottish Premiership on 27th August.

Hibernian are away to St Mirren the same day. Both games kick-off at 3pm.