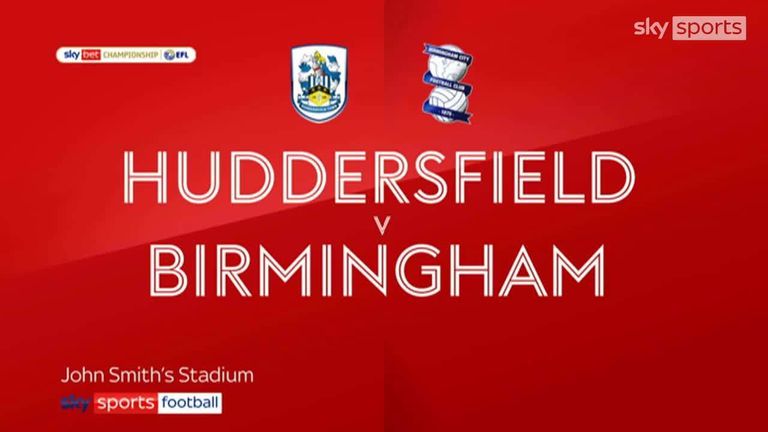 Birmingham's goal drought goes on but Lee Bowyer's side ended a run of three defeats with a battling 0-0 draw at Sky Bet Championship high flyers Huddersfield.

City have now failed to score in six successive matches but defended stoutly to deny the Terriers a third win in four games.

However, Huddersfield nearly snatched victory with substitute Fraizer Campbell hitting the woodwork twice after his introduction as a 75th-minute substitute.

Town's point, at least, moved them into the top six while Bowyer's side are 19th, four points off the relegation zone

Danny Ward forced Sarkic into a fingertip save after just 25 seconds but a raised flag for offside denied Town the corner.

It was the prelude to a frustrating night for Town, unbeaten by the Blues at the John Smith's Stadium since 2014.

The Terriers dominated possession but only briefly threatened to make the breakthrough in the opening 45 minutes.

Danel Sinani went closest after 26 minutes but his curling left-foot shot from 20 yards was pushed aside by acrobatic Sarkic.

Ward was inches away from connecting with a cross from the speedy and dangerous Duane Holmes but otherwise, Birmingham's defence remained untroubled.

Huddersfield, looking to extend their unbeaten run to four games, did not have things all their own way.

Had a pass from Lukas Jutkiewicz been in front rather than behind him, Australian Riley McGree might have slid in a 19th-minute opener.

Birmingham threatened again and 'keeper Lee Nicholls did well to smother McGree's deflected shot at his near post.

The second half followed a predictably similar pattern to the first with Town bossing the ball, trying to find a moment of quality or inspiration to break the stalemate.

McGree's industry fashioned a back post, half-chance for Tahith Chong but the Manchester United loanee's control was poor.

The contest badly needed a spark and Campbell almost provided it after replacing Ward.

Sorba Thomas' run and cross were the catalysts only for Campbell's eventual shot on the turn to be deflected onto an upright and away for a corner.

Huddersfield's Carlos Corberan: The Championship is a marathon and I watched my team compete very well. We want to be a team that defends well and attacks well. The key is to use the ball better to produce more chances. But it is not always easy. We were controlling Birmingham from a physical point of view. But the last action in their box didn't work like we wanted. When I imagined how we would play the game, I imagined it would be like this.

"It is important to have players who can make an impact for the team and to give some freshness. He [Campbell] was fighting for every ball and in 15 minutes he helped create a couple of big chances. It is true we wanted the three points but I am always pleased when I see my team performing well."

Birmingham's Lee Bowyer: "I have never had a team that have gone so long without scoring. If you go two games, it's unusual. My teams always score. I feel for them but there are positives to take. It would have been easy for them to hide. But they are not; they are fighting for everything and the players need credit for that.

"It's something I have had to sacrifice. Do you want to lose 2, 3, 4-0 every week. This is the way we stayed in the division last season. It is not as pretty as I would like it to be. Something had to change so that's what I have done. This is a tough place to come. They are a good team. I can see why they are in the top six. Overall, it was probably a fair point."