Report and free match highlights from the Sky Bet Championship clash between Huddersfield and Bournemouth at the John Smith's Stadium as goals from Jaidon Anthony, Jefferson Lerma and Dominic Solanke secured an emphatic Cherries win 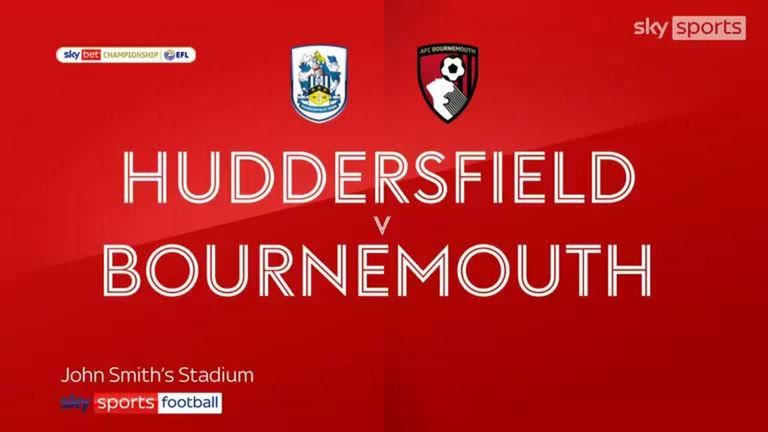 Highlights of the Sky Bet Championship game between Huddersfield and Bournemouth.

AFC Bournemouth made a huge leap towards a return to the Premier League by comfortably beating promotion rivals Huddersfield Town.

Jaidon Anthony, Jefferson Lerma and Dominic Solanke were on the mark as the ruthless visitors dented the Terriers' play-off hopes with a 3-0 win at The John Smith's Stadium.

The Cherries completely dominated their fellow promotion hopefuls in West Yorkshire to open a healthy six-point gap to the automatic promotion spots.

Anthony opened the scoring and Lerma capitalised on a mistake to net a second on a difficult day for the hosts.

The prolific Solanke then added an exquisite third shortly after half-time to take Bournemouth out of sight.

Solanke broke clear inside two minutes after the hosts were caught out at the back but had a tame effort parried away by goalkeeper Lee Nicholls.

Solanke threatened again shortly after, striking the bar with a free header from close range after Ryan Christie's free-kick found the frontman free in the box.

The 24-year-old then turned provider for a deserved Cherries opener in the 19th minute.

Christie unlocked the home defence with an inch-perfect pass for Solanke, who squared for Anthony to tap in and finish a delightful Cherries move.

Huddersfield's 17-game unbeaten Championship run ended at Millwall in midweek and Carlos Corberan's men were desperate for an immediate response after going behind. 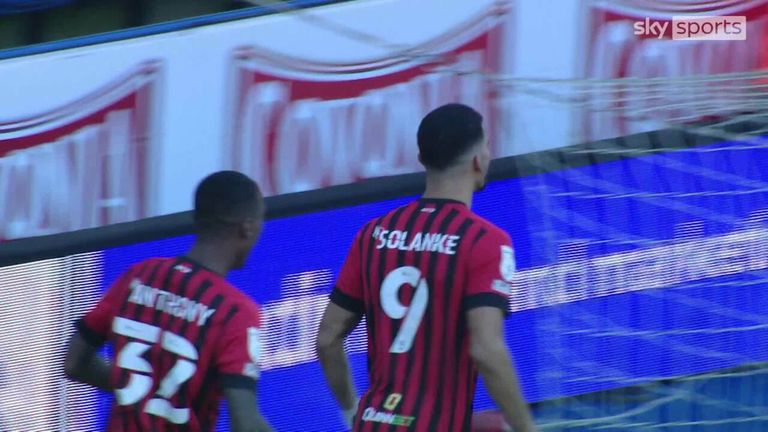 The hosts started to capitalise on their intense pressing as Danny Ward forced a simple save from Mark Travers.

But a positive response was short-lived as Scott Parker's side doubled their advantage.

Nicholls raced out to deny the dangerous Solanke, but Tom Lees skewed an attempted clearance and Lerma pounced. The Colombian international cleverly hooked beyond the scrambling Nicholls to find the bottom corner just after the half-hour mark.

Huddersfield simply had no answer for the incisiveness and quality of Parker's side in the final third.

Former Terriers man Philip Billing received a frosty reception from home supporters, but looked bright and had a shot saved before the break.

Bournemouth started the second half where they left off, breezing through the hosts' defence with ease.

Solanke struck his 23rd goal of the season just two minutes after the break, gloriously flicking past the helpless Nicholls to open up a three-goal cushion, deflating the home side.

Corberan's side worked hard to make inroads against the visitors, but Parker's men, who boast the league's best defensive record, held firm.

The game began to lose urgency as midfield duo Lerma and Lewis Cook took control against the tiring Terriers.

That was until Lerma's brilliant cross-field pass found Anthony, who curled just wide as the visitors looked to inflict further pain on their promotion rivals.

Huddersfield striker Ward went close late on but there was to be no consolation goal for the home side.

Huddersfield's Carlos Corberan: "The worst thing I can say is it's very easy to explain the game. Individually and collectively, Bournemouth were better than us. There was a big difference between the sides' performances. I think
Bournemouth not starting well maybe made us take risks in the press that left us open. After they scored the goal it was difficult to be compact after half time. We tried to be aggressive and we conceded the third goal.

"I think we took risks where if you win the one v one you get rewards but if you don't it lets them attack open spaces and you're going to suffer. When the players got fatigued, they started to play worse. We did a lot of running against Millwall and didn't achieve anything. We knew that in this type of game you can only compete at 100%. The fact we didn't show our strengths in the last two games doesn't mean we won't be able to in the next two games.

"That's the challenge, that's life, that's sport, and we need to be able to show again. In life if you don't show you can go again, you can't live, you can't compete, you can't do anything."

Bournemouth's Scott Parker: "It was arguably one of our best performances of the season in every facet. We stuck to the plan and then executed and were very clinical and fluid. It was a big result but a massive performance from us. Huddersfield are a good side but we were too good for them, I think that's fair to say. Today was the first time we got an all-round performance from start to finish. To come here where Huddersfield have done so well and do that is a massive boost for us so we need to take that.

"He (Solanke) was incredible. His goals are pivotal for us and he's always at the end of things when we want to put the ball in the net. He gave a platform for us when we had to go long a bit. I don't think there's a number nine out there, including the Premier League, who puts in the numbers and the graft in games that he does. He was fully worthy of his goal and is fully worthy of all the goals he's scored this year."