Report and highlights from the Sky Bet Championship clash between Huddersfield and Middlesbrough at the John Smith's Stadium as Duncan Watmore fired Boro towards a first victory under Chris Wilder on Saturday. 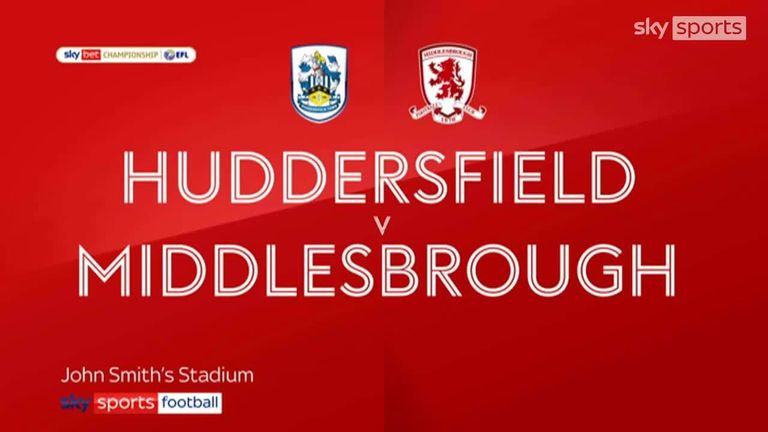 Highlights of the Sky Bet Championship game between Huddersfield and Middlesbrough.

Duncan Watmore scored a brilliant double as Chris Wilder's Middlesbrough era sparked into life with a 2-1 win at Huddersfield.

Watmore struck twice early in the first half to give the visitors a healthy advantage.

And Wilder's men were seldom under threat until a late consolation goal as the hosts were condemned to their second consecutive defeat.

Wilder had taken one point from six after replacing Neil Warnock as Boro boss but an important victory in West Yorkshire lifted his side up to mid-table in the Championship.

Both sides lacked rhythm in an edgy opening as Terriers midfielder Scott High threatened to unlock the Boro defence with a curling through ball towards Danny Ward.

But just moments later, Wilder's men took the lead after cutting the hosts apart on the break.

Watmore found himself in ample space to collect Isaiah Jones' cross and clinically finished past Lee Nicholls in the 16th minute.

Carlos Corberan's Huddersfield had kept clean sheets in their last four home games but the Spaniard's side were uncharacteristically disorganised early on.

And the visitors were rampant as Watmore was superbly set up by Huddersfield academy graduate Matt Crooks to delightfully lob Nicholls on the half volley for his third league goal of the season.

Huddersfield could not live with Watmore's movement and the forward turned defender Tom Lees before striking straight at Nicholls as he sensed a quick-fire hat-trick.

Wilder's impressive side regained total control before the break as the hosts failed to muster a single shot on target.

Corberan's men left the field to a chorus of boos after a dismal first period littered with mistakes in possession and defensive lapses.

Boro started the second half as they ended the first, cutting through the hosts almost at will.

Midfielder Marcus Tavernier was played through on goal after some tidy interplay but his effort was foiled by the onrushing Nicholls, who reacted well to close the angle.

The hosts looked to breathe life into an insipid performance in search of a response but the compact three-man Boro defence remained resolute and the visitors were far more dangerous.

Corberan made attacking changes in a bid to rescue the game as Josh Koroma and Fraizer Campbell replaced Harry Toffolo and Duane Holmes.

Boro had a huge penalty claim waved away after Tavernier's shot struck Lees in the box and, although Lewis O'Brien's pull back was deflected in for an own goal by goalkeeper Luke Daniels in the final seconds, the visitors held on for a deserved victory.

Huddersfield's Carlos Corberan: "We didn't perform well. The attacking and defending of the team was really poor. We were better in the second half but of course it was 0-2 so it was a different situation. We couldn't break the press and they found the solutions before we arrived. They eliminated players in the high press and were very dangerous.

"When they scored the first goal it made us go higher up the pitch but we didn't defend well or win our challenges. The attack didn't work well and the defence didn't work well in the first half. We changed structure in the second half and the team were more aggressive but we didn't make many chances. We did not cope with their press and we did not press well enough. With both goals, Middlesbrough were superb in their change of pace and we didn't respond to it. Their final balls and finishing were excellent but our defensive response was wrong."

Middlesbrough's Chris Wilder: "We got there in the end. We could have won on Tuesday night or Saturday but we didn't and we had to go again. I like us to play well and we have done today. I didn't want to come here with fabulous travelling support and play well but not get the win. The scoreline flattered them and we were more comfortable than it looked.

"We've beaten a decent side who are doing well and it's a big three points. The pass from (Matt) Crooks to Duncan Watmore was incredible. The finish was brilliant and the first goal was a team goal as well. Our players have excellent quality and I'm delighted for Duncan. (Jonny) Howson dictated the tempo and pace of the game, especially in the first half. He made some great decisions and you wouldn't expect anything less from a player with his CV."