Lewis Grabban and Joe Lolley earn the points for Nottingham Forest at the KCOM Stadium. 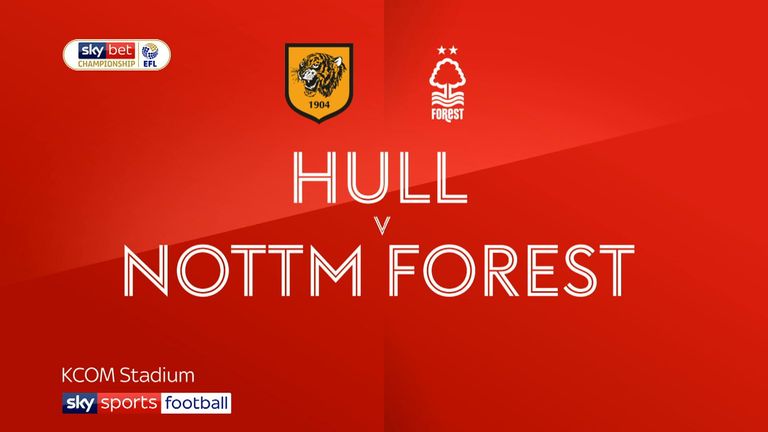 Nottingham Forest maintained their promising run of form with a deserved 2-0 victory at Hull.

Second-half goals within the space of three minutes from Lewis Grabban and Joe Lolley were just reward for the visitors' enterprise.

Hull, who remain in the Sky Bet Championship relegation zone, can have few complaints in a game which at times felt like a mismatch.

Forest have now lost just one of their last 12 league games and showed why from the outset as Aitor Karanka's men looked composed and dominant.

Joao Carvalho offered an early statement of intent when his powerful hit from a tight angle was deflected over the crossbar by Hull defender Jordy de Wijs.

Minutes later, De Wijs was guilty of going to ground prematurely as Grabban sidled into a similar position from which Carvalho went close.

But Grabban could not test David Marshall as he dragged a right-footed strike wide of the Hull goalkeeper's right post.

Though chances were at a premium, an increasingly optimistic away following had good reason to expect a goal their team's first-half endeavours perhaps warranted.

Yet after having finally subdued a relentless spell of Forest pressure, Hull striker Fraizer Campbell felt he should have been awarded a penalty after 34 minutes.

Campbell argued that he had been fouled after Forest made a mess of Kamil Grosicki's dangerous corner, but his protests fell upon deaf ears.

Hull manager Nigel Adkins will have been a little happier as half-time approached, but Forest still looked the superior team and again went close when Matty Cash fired wide from distance.

Hull at least started the second half with a shade more purpose, and had their only meaningful attempt on goal when Grosicki's 30-yard free-kick was palmed over the crossbar by Costel Pantilimon.

But just when it looked like Forest were running short of inspiration, Grabban pounced after 61 minutes.

Cash's outstanding run through the middle was matched only by his fierce strike, which was well parried by Marshall. Cash's follow-up was less impressive, but De Wijs made a humiliating blunder and clumsily shinned the ball to Grabban, who could not miss.

It was the £6million striker's 11th goal in 13 games and was a blow from which Hull could not recover.

Just three minutes later Lolley put the game out of reach when his deflected shot from the right of the penalty box floated beyond Marshall.

Hull can count themselves fortunate to have conceded just two goals as Marshall needed to be in sprightly form to twice deny the impressive Lolley later on.

Forest continued to press on, and former Hull captain Michael Dawson could barely have wished for an easier return to the KCOM Stadium as his team coasted to victory.

Nigel Adkins: "We've gifted them the opportunity to win the game and they have gone and capitalised on that. It's very frustrating. It's another shocking goal from an individual mistake and then they get a deflection (for the second goal).

"It's fair to say they got too much possession of the football for my liking in the first half. We started the second half well but it (Forest's opening goal) was from our cross and then they've countered the length of the pitch. All of a sudden, the game that you are in goes against you."

Aitor Karanka: "The main thing for me is that I can feel the improvement every single game. At the start of the season I said that this team needed time, because we changed a lot of players in the summer.

"But we are showing we are still improving and I'm really pleased. We want to keep growing and with this quality on the pitch we can do nice things."