Report and highlights from the Sky Bet Championship clash between Hull City and Peterborough at the MKM Stadium as Siriki Dembele struck in the second half to seal victory for Posh on Wednesday night. 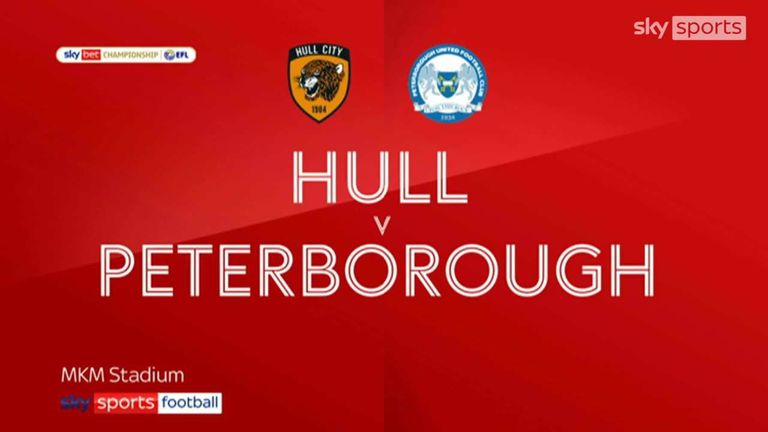 Highlights of the Sky Bet Championship match between Hull and Peterborough United.

Peterborough ended a run of six consecutive away defeats with a 2-1 victory at fellow Sky Bet Championship strugglers Hull.

Darren Ferguson's men were second best for most of an eventful match which pivoted around Josh Magennis' missed penalty after 66 minutes.

But Siriki Dembele once again emerged the class act for the visitors with a fine winner after 72 minutes.

Dembele's smart run off Jorge Grant's threaded pass was precise, but his dinked finish over goalkeeper Matt Ingram was even better.

Victory at Hull moved Posh out of the relegation zone at the expense of their opponents, who only have themselves to blame.

Despite having fallen behind following Jack Taylor's excellent strike from distance after 43 minutes, Grant McCann's men created the better chances until Dembele struck.

They deservedly equalised when Magennis headed home in first-half stoppage time, but the Northern Ireland international's penalty miss after the break was the defining moment of the game.

Hull fans demanded the dismissal of McCann at full-time, but their team were the more dangerous side for large parts and went close to taking the lead after 25 minutes.

George Honeyman's free-kick from the left was well parried by goalkeeper David Cornell but Tom Huddlestone picked up the pieces outside the penalty area and slashed a cool half-volley which struck the right post.

Cornell also had to be alert minutes later when he smothered Keane Lewis-Potter's frail dink towards the left of the six-yard box.

Hull's momentum was stifled once the influential Huddlestone suffered an injury and had to be replaced by Richie Smallwood on the half-hour.

Peterborough sensed their opportunity, which might have been a factor in leaving an unmarked Mallik Wilks a chance to hare into their penalty area. The Hull forward had options across goal but he struck from an improbable position on the right that was deflected for a corner.

That miss was costly as the visitors opened the scoring against the run of play.

Di'Shon Bernard's sloppy back-pass, from which Ingram denied Dembele in front of goal, was the catalyst. Peterborough's subsequent corner was well worked and Taylor did exceptionally well to plant a first-time curler into the top left corner.

Hull's response was as swift as it was impressive. Magennis - given an unthinkable amount of space inside the six-yard box so close to half-time - thumped home Callum Elder's intelligent cross from the left.

Hull went for the jugular after the restart.

Lewis-Potter should have done better with a poked stab that went over the crossbar following Magennis' good cross from the right.

Hull's endeavours should later have been rewarded when Wilks was nudged off the ball by Dan Butler inside the box.

Referee Leigh Doughty was correct to award a penalty, but Magennis made an awful mess of the spot-kick as he blazed over the crossbar.

Dembele punished the miss as he struck six minutes later, though Cornell later had to be sharp to deny substitute Tom Eaves' goal-bound header to earn his side three points.

Hull's Grant McCann: "I understand their frustrations - I feel it, and the players feel it. I get it as the supporters pay their hard-earned money. At the minute, we're on a bit of a low so we need to find a way to turn around results.

"We are giving everything for this football club, but that's football and that's life and you have to take it on the chin. I've got every single player fighting, but we're just coming up a bit short. We've been in dark places before with this football, but we've got to stand up to the criticism."

Peterborough's Darren Ferguson: "One win away from home doesn't make everything fine - I believe there were all sorts of records getting broken if we lost - but we have to build on it. My players had plenty of motivation as everyone were putting us down, which I can understand.

"We're now out of the relegation zone and you can sort of reset a little bit. Quite rightly we've taken a lot of criticism, but we've stuck at it and I know we'll have a stronger second half to the season."