Lewis Baker opened the scoring for Reading with a thunderbolt; Marc Pugh added the other for Nigel Adkins' men 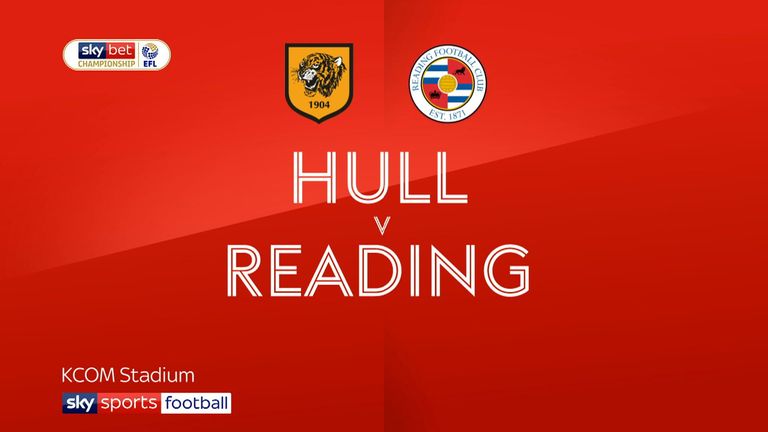 Highlights of the Sky Bet Championship match between Hull and Reading

Kamil Grosicki scored twice and Marc Pugh also netted as Hull came from behind to beat Reading 3-1 at the KCOM Stadium and keep their Sky Bet Championship play-off hopes alive.

The Tigers had gone behind to Lewis Baker's fine first-half effort but a pair of equally good finishes by Grosicki sandwiched a close-range effort from Pugh.

The victory took Nigel Adkins' side to within two wins of the play-offs but Jose Gomes' Royals are left in the thick of a fight against relegation.

Reading are now one of two sides on 40 points and just one point above Rotherham in the final relegation spot.

Hull started the game at pace and Jackson Irvine's pass was flicked on by Jarrod Bowen for Grosicki but Emiliano Martinez smothered his low cross with an unmarked Fraizer Campbell waiting to pounce a yard out.

Jordy de Wijs then hit a long ball just too far in front of Campbell as Hull continued to dominate the first quarter.

Reading responded to take the lead against the run of play as Baker found space 20 yards out and hit a rising left-footed shot into the roof of the Hull goal with 16 minutes gone.

Bowen then saw his right-footed shot blocked following more good build-up play from the home side before Reece Burke headed the resulting corner just wide of the far post.

Baker almost provided Reading with a second goal when his free-kick from the right was headed on to his own bar by Pugh with half an hour gone.

Hull came closest to opening their account as half-time approached from Pugh's corner to the far post but Campbell headed just wide when well placed.

Grosicki fired well off target from a narrow angle as Hull again failed to find an end product to go with their domination.

Bowen should have done better just before the break but steered his shot wide across goal from Grosicki's low ball into the area.

Hull were level eight minutes into the second half as Grosicki curled a low shot around Martinez and in off the far post after springing the offside trap and running on to a pass from Campbell.

Grosicki could not repeat the trick minutes later as he controlled a pass from Campbell but this time steered wide of goal when better placed and then Campbell saw his curled effort blocked for a corner by Liam Moore.

David Marshall came to Hull's rescue as he blocked a shot from Modou Barrow as Reading pressed after De Wijs was caught in possession.

Hull were in front with a well-worked goal after 65 minutes as captain Markus Henriksen fed Bowen and he flicked on for Grosicki. When his low cross found Bowen his shot was saved by Martinez and Pugh pounced on the rebound to fire home from three yards.

Grosicki grabbed his second after 76 minutes and Campbell again played a part. The forward sent the winger clear from halfway and he fired past Martinez from the edge of the area to wrap up the victory.

Nigel Adkins: "The expectation was for us to get relegated, bottom of the league in October, and we have been on a great run.

"We are playing exciting football, scoring goals. We have got six games to go and we are right in the mix.

Jose Gomes: "We lost, our direct opponents won and we are not the worst team in the world. On Wednesday we have the chance to play again.

"Two games can change everything for a team that can go to the play-offs and a team fighting against relegation. That is why football is amazing and everybody loves football. It will be a big fight until the end."