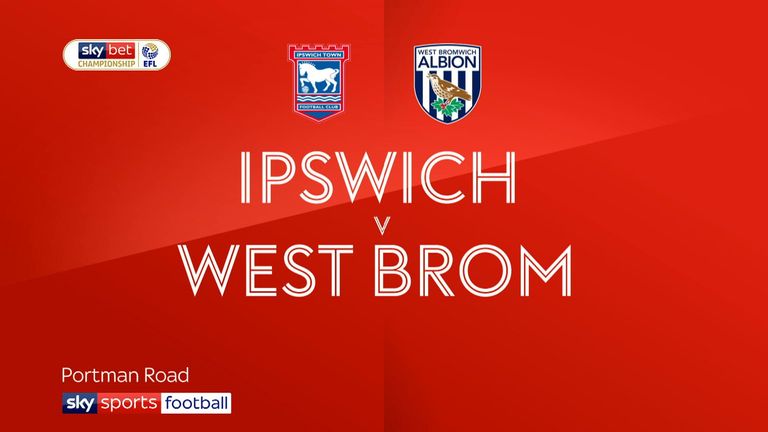 Highlights of the Sky Bet Championship game between Ipswich and West Brom.

Goals from Jay Rodriguez and Harvey Barnes saw West Brom move up to second in the Sky Bet Championship after a 2-1 win at Ipswich on Friday evening.

Rodriguez struck the opener in the 26th minute - his 100th career goal - from just a few yards out after Kieran Gibbs had headed Matt Phillips' cross into his path, before Barnes added a second to seemingly kill off the game 13 minutes from time.

Ipswich substitute Kayden Jackson pulled one back after Tosin Adarabioyo's hashed clearance with five minutes left, and Jack Lankester came within a post's width of netting a dramatic late equaliser.

Man of the match: Matt Phillips

The result leaves Paul Lambert's men without a league win at Portman Road this season, with Darren Moore's side move within two points of leaders Norwich.

With a vocal crowd in attendance thanks to Lambert's call to arms, there was a sense that fans would be treated to an all-out attacking approach from the hosts in Suffolk, yet the game started in a relatively laboured fashion.

The Baggies beat Leeds 4-1 prior to the international break, while Ipswich were held to a 2-2 draw away at Reading.

The noise of the home crowd was soon lowered, though, as Rodriguez netted after Gibbs cushioned Phillips right-wing delivery into the six-yard box and he tucked home unchallenged.

Ipswich had not won at home all season, but seemed heed to Lambert's words to take their game to their opponents after the break, at times penning West Brom in and earning themselves a succession of corners, but the renewed vigour was short lived.

West Brom - the top scorers in English football - had already scored a league-high 13 goals in the last 15 minutes of game and they added another with 13 minutes to play; Phillips led the counter, Barnes dropped his shoulder and tucked into the bottom, leaving Jordan Spence in his wake.

The lively Jackson set up a tense finale when Adarabioyo took a needless touch on a cross into the 18-yard, allowing him to clinically tuck home, but a consolation was all it proved to be.

Man of the match - Matt Phillips

Another stellar showing from Phillips, once again showing how significant a role he will play in West Brom's quest for an immediate return to the Premier League come May.

🍾 Man of the Match is @WBA’s Matt Phillips🍾

Paul Lambert: "We gave it a right good go. The first half we maybe showed a little bit too much respect but then in the second half I thought we were outstanding, but they are a good side.

"I can understand sometimes there's a little bit of trepidation because of what's happened in the past, but in the three games I've been here, we've been outstanding. On another day we might have got an equaliser but sometimes the table does lie."

Darren Moore: "A very, very pleasing away performance. I thought we deserved it, I thought, right from the word go, the boys set about it and I thought we controlled the tempo of the game. 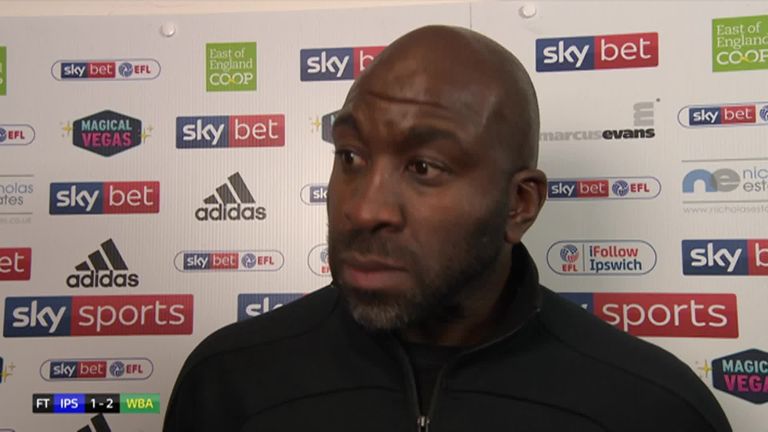 Despite missing out on a clean sheet West Brom boss Darren Moore was delighted to come away from Portman road with all three points after a 2-1 win over Ipswich.

"Paul has got Ipswich in the ascendancy, they are a good team and they won't be where they are for much longer if they play like that because they have given us a stern test this evening. We prepared in the week for them, we knew it was going to be a tough game. It was a tough game and I'm pleased with the three points."

Both sides are next in action on Wednesday evening as part of the final round of midweek fixtures of 2018. Ipswich are at home once more as they face Bristol City, while West Brom travel to south Wales to face Swansea, with both games available to view on Sky Sports Football via the red button.