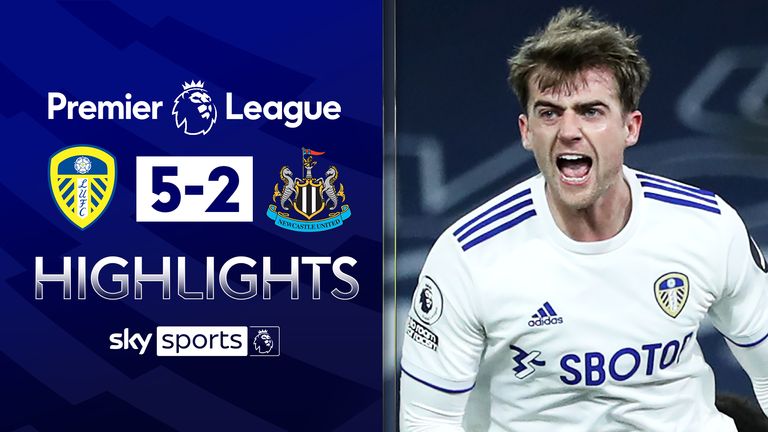 FREE TO WATCH: Highlights from Leeds’ win over Newcastle in the Premier League.

Three goals in the final 15 minutes - including a Jack Harrison screamer - got Leeds back to winning ways with a 5-2 victory over Newcastle, after their set-piece frailties almost cost them again at Elland Road.

The hosts - who had lost their last two and only won one of their first six home league games - dominated throughout the contest but needed Patrick Bamford (35) to pop up with his ninth goal of the season after Jeff Hendrick (26) had tucked in against the run of play.

Newcastle saw a strong penalty shout for Callum Wilson waved away not long before Rodrigo glanced in Jack Harrison's fine cross (61) to put Leeds in charge - but once again Marcelo Bielsa's side were undone from a set-piece, with Ciaran Clark heading in a corner (65).

Leeds weren't to be denied their deserved victory, though, and Stuart Dallas (77) and Ezgjan Alioski (85) finished clinically before the impressive Harrison blasted in from the edge of the box to wrap up the three points in style.

The result sees Leeds remain in 14th but move level with 13th-placed Newcastle - who have a game in hand - on 17 points.

Newcastle - coming into the game after back-to-back wins but with coronavirus still affecting some of their squad and staff - started brightly, with Isaac Hayden mis-hitting a cross onto the roof of the Leeds net. But from around five minutes in, the hosts took control of the ball, with Liam Cooper testing Karl Darlow from a corner before Jack Harrison, Raphinha, and Mateusz Klich sent efforts off target.

The visitors struck an unlikely opener in clinical fashion, though. Fit-again Ryan Fraser had just seen a low shot saved by Illan Meslier, but when Wilson flicked on his cross there was nothing the 'keeper could do to stop Hendrick tucking in his second of the season at the back post.

Leeds almost instantly resumed their assault on the Newcastle goal - they had 14 shots in the first half, more than any team has had in the opening 45 of a Premier League game this season - and, after Raphinha fired forcefully at Darlow and then wildly over, the hosts pulled level.

Raphinha turned creator, clipping in an inviting cross for Rodrigo to head at goal. Darlow touched it onto the bar but couldn't recover in time to prevent Bamford nodding in the follow up.

Newcastle came out for the second half with renewed intent and felt they should have had a spot-kick on 53 minutes when Cooper slid in and had a nibble at Wilson's heel in the box. Referee Simon Hooper initially waved it away and VAR Kevin Friend backed him up.

Eight minutes later, Leeds were in front. Harrison brilliantly brought down Rodrigo's pass out wide and then pinged it back into the middle for the Spaniard to glance home.

Leeds had the lead for just a few moments, though, as Clark headed in from a corner - the 12th set-piece goal Leeds have let in this season out of a total of 24.

Despite the setback, Bielsa's side continued to have the upper hand and Dallas grabbed their third after Sean Longstaff lost possession in his own box and Klich crossed to the back post.

Leeds didn't stop there. Alioski lashed home after sub Pablo Hernandez spotted him in space in the Newcastle area and Harrison grabbed the headlines with a wonder strike on the break in the final minutes, crashing home his left-foot shot from the edge of the box.

It was an emphatic finish to a dominant display from Bielsa's side, on the day the manager took charge of his 114th game for the club - the most he's been at one side throughout his career.

Leeds boss Marcelo Bielsa: "It was a deserved victory. In both halves we attacked a lot and created plenty of chances but in the second half we were more efficient. The team carried on playing in a calm and organised manner after they levelled the game and eventually were able to get on top of them again and score the goals when we needed to."

Newcastle boss Steve Bruce: "Up until the last 12 minutes or whatever it was, I felt we gave as good as we got, and it could go either way. Unfortunately we've been punished and given away bad goals. When you give away bad goals at this level it's difficult to swallow.

"I was all for VAR when they brought it in to make sure the clear and obvious mistakes the referee misses, that's what the VAR is for. If anyone looks at the challenge [of Cooper on Wilson] you'll understand it's a penalty. We might not have gone on to win the match but certainly when you take the lead in the Premier League the outcome can be very different."