Report and free match highlights as Leicester won a thrilling contest against Manchester United at the King Power Stadium.

Leicester came from behind to win 4-2 against Manchester United and end their opponents' 29-game unbeaten run away from home.

Mason Greenwood had opened the scoring with a stunning strike but Youri Tielemans produced one of his own before Caglar Soyuncu put Leicester ahead late in the game.

Marcus Rashford looked to have salvaged something but Jamie Vardy immediately restored the advantage before Patson Daka ensured the result in stoppage time.

It was no more than Leicester deserved as Brendan Rodgers' side played the more proactive football throughout to end a run of four games without a win.

The defeat leaves Ole Gunnar Solskjaer under further scrutiny as United's own winless run extends to three games as they continue to look less than the sum of their expensive parts.

Manchester United's Paul Pogba suggested that his side lack maturity and experience as they were beaten 4-2 in the Premier League at Leicester.

Despite Leicester's struggles of late, they started the game purposefully with Kelechi Iheanacho causing problems for the United defence as a result of his direct running.

Twice they threatened the penalty box only for nobody to be able to latch onto cut backs from Jamie Vardy and James Maddison before the latter forced a save from David de Gea.

The crowd were enjoying the home team's appetite to attack but it did allow United counter-attacking opportunities with Greenwood testing Kasper Schmeichel.

It proved to be a warning that Leicester did not heed, although there was little that could be done about the young forward's opening goal. It was an outrageous hit.

Fed the ball by Bruno Fernandes, it was the sort of position from which teams might encourage an opponent to shoot but Greenwood simply lashed the ball into the far corner.

The home fans were stunned but Leicester's players did not seem too disheartened. Good play from Maddison saw Ricardo Pereira go close to volleying in a swift equaliser.

With Solskjaer having named such an attacking line-up, there seemed little prospect of shutting the game down and so it proved as chances came at both ends.

Jonny Evans was fit enough to play for Leicester, while Brendan Rodgers opted to pair Kelechi Iheanacho and Jamie Vardy in attack with James Maddison in support.

Harry Maguire made a surprise return against his former club after recovering from injury, while Cristiano Ronaldo returned to the line-up after being rested against Everton.

Cristiano Ronaldo's snap shot brought out a reaction save from Schmeichel but instead it was Tielemans who scored following a moment to forget for Harry Maguire.

Barracked by the crowd throughout on his return, he was on his heels waiting for a pass from De Gea and that hesitancy was all Iheanacho needed to steal in and intercept.

Tielemans deceived the United goalkeeper with a lofted cross-shot that found the top corner and the King Power Stadium erupted.

Rodgers' side began to play with real confidence, Maddison finding space between the lines with Iheanacho's effort proving the culmination of a flowing passing move.

In the second half, the pattern continued with Leicester probing and United's threat obvious. Maddison fired over. Nemanja Matic went close with a vicious shot.

But while Rashford made his return off the bench, it was Leicester doing all the pushing with De Gea tipping a Tielemans shot onto the post before lively substitute Daka went close too.

The goalkeeper could not keep them out forever, however, and when the ball fell nicely for Soyuncu inside the penalty box, Leicester were ahead for the first time.

With the home crowd roaring their side on, Pereira almost doubled the lead but then came the twist - horrendous defending allowing Victor Lindelof's long pass to find Rashford.

The England forward's finish was unerring and suddenly United had a lifeline but it lasted mere seconds as another substitute Ayoze Perez found Vardy at the other end.

The striker's finish was utterly emphatic, sparking ecstatic celebrations and this time there was to be no comeback with Daka adding a fourth from close range at the far post to seal it.

For Leicester, it was an afternoon to remember. For United, with Ronaldo all but anonymous throughout, the memory will linger for all the wrong reasons.

Brendan Rodgers: "I thought we started well, then we came back into the game and showed a great mentality. In the second half, it was about reinforcing that aggression in our game, that is when we are at our best. We were excellent at creating opportunities going forward and we could have had more." 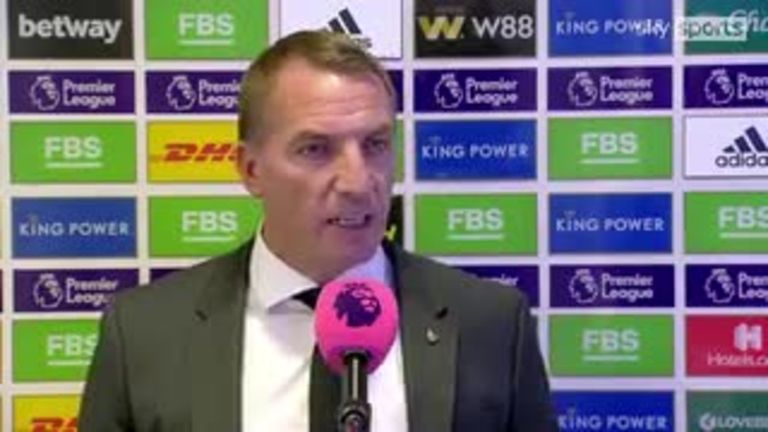 Leicester City manager Brendan Rodgers claims the 4-2 win over Manchester United sets the standard for the rest of the season in terms of the quality of the performance.

Ole Gunnar Solskjaer: "We didn't deserve a point today. I wouldn't say it was maturity, it was focus in the key moments. Two set pieces, one goal 10 seconds after we equalise, these are goals that should not happen. We weren't good enough at second balls and 50-50s, the sort of things you need to do to win football matches. The best player was David and he conceded four goals."

"I think Solskjaer's in a spot of bother.

"I said before this game, if he can get through November and he's still in a job, that for me means Man Utd have every chance of winning the Premier League because they have some shocking fixtures and this was the start of it.

"This wasn't a smash and grab from Leicester, they thoroughly deserved it. United are struggling. They'll play at home to a bottom-half team and play McTominay and Fred as holding midfielders. They go to Leicester and play one in Matic, who has been a top-drawer player but hasn't got the legs. Pogba's a World Cup winner but he'll play at his own pace.

"They haven't got that energy in midfield. They're individuals. They're not a team. They play their own way and they haven't got legs all around the pitch. For me, Solskjaer's under severe pressure."

United face a formidable set of fixtures in October and November as they look to keep pace in the Premier League and ensure Champions League qualification, with Liverpool, Chelsea, Arsenal, Tottenham and the Manchester derby looming domestically.

Leicester face Spartak Moscow on Wednesday in the Europa League before travelling to London to face Brentford on Sunday.

Manchester United host Atalanta in the Champions League on Wednesday evening before Liverpool are the visitors to Old Trafford on Sunday of next weekend.