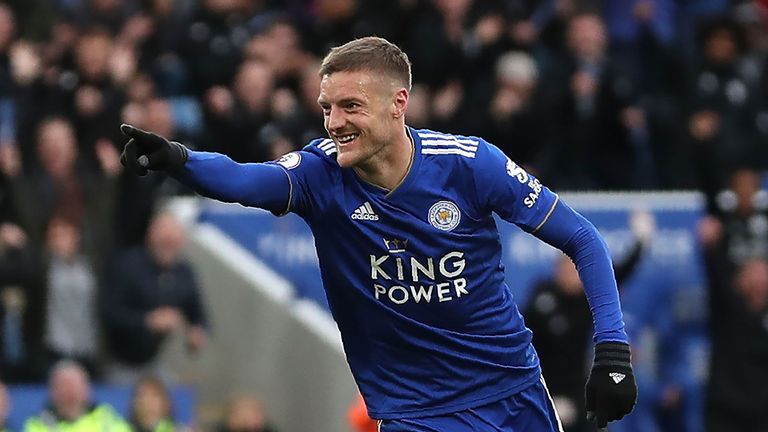 Highlights from Leicester's 3-1 win over Fulham in the Premier League.

Jamie Vardy reached a century of Leicester goals as relegation-threatened Fulham were beaten 3-1 to give Brendan Rodgers a first win in charge at the King Power Stadium.

Youri Tielemans gave the hosts a deserved lead from Vardy's unselfish pass (21), but substitute Floyd Ayite hauled Fulham level in untidy fashion when his shot deflected in off Harry Maguire (51).

Leicester re-established their lead when Vardy was found by James Maddison to score his 100th goal for the Foxes (78), and the striker sealed the victory when he stroked in Harvey Barnes' cross with four minutes remaining.

The result moves Leicester above Everton into 10th position while Fulham remain 19th, but are now 13 points adrift of safety.

Leicester had 11 shots on goal in a one-sided opening period with Fulham - who had gained just two points from their previous 15 away league games, failing to register a single attempt before the interval.

Vardy missed a glorious chance to break the deadlock when he was released by Barnes, but the striker allowed Havard Nordtveit to make a last-ditch recovery tackle before Sergio Rico could be tested.

Two minutes later, Vardy was once again played through on goal after Wilfred Ndidi dispossessed Calum Chambers, but this time he unselfishly teed up Tielemans for a simple finish.

Rodgers moved away from a back three in just his second game in charge as Gray returned to the starting line-up in place of Morgan in the one change from the side beaten 2-1 at Watford.

Parker opted to field an unchanged side, meaning Babel, Cairney and Sessegnon played in more advanced positions to support Mitrovic.

Barnes, Maddison and Tielemans all fired wide from the edge of the area as a combination of Rodgers' high-pressing tactics and Fulham's flawed attempts to play out from the back contributed to an onslaught on Rico's goal.

But Fulham regathered themselves at the break, with Scott Parker introducing Ayite for Ryan Sessegnon - and the move paid instant dividends.

Ben Chilwell failed to cut out Nordtveit's raking pass, allowing the Togolese winger to step inside and fire past Kasper Schmeichel via a deflection off Maguire.

With Vardy retired from international duty, it was Leicester's impressionable young Englishmen who will hope for a call-up for the European Championship qualifiers against Czech Republic and Montenegro later this month.

Vardy may no longer be available for selection, but he still has a big role to play in helping the development of the likes of Barnes and Maddison, and both benefited from the striker's selfless running.

Less encouraging was the performance of Sessegnon, who was hooked at half-time after failing to make a meaningful impact. Ben Chilwell was bright from full-back going forward, but his failure to cut out Nordtveit's pass led to Ayite's scrappy equaliser, while Maguire will feel he ought to have blocked the shot.

Rico had to produce a stunning save to deny the impressive Barnes, before Joe Bryan's cross was nearly headed in by Aleksandar Mitrovic but for the fingertips of Schmeichel.

But Fulham would again be the authors of their own downfall as Maddison pounced on Nordtveit's ill-judged attempt to play out from the back to set up Vardy for a trademark strike across Rico. Eight minutes later, Barnes did brilliantly to escape Denis Odoi to tee up Vardy for his second and seal a first victory for Rodgers.

Brendan Rodgers: "We're asking them to play an intense game and there's still lots of improvements we can make with and without the ball, but I'm delighted for the players. It's a great start for us [at home] because I know these games have been difficult for us this season.

"Vardy's tactically very good. How he presses the game and how he leads the press. As you can see, he doesn't need too many chances. He's one of the top strikers in this division, and he produced two wonderful finishes." 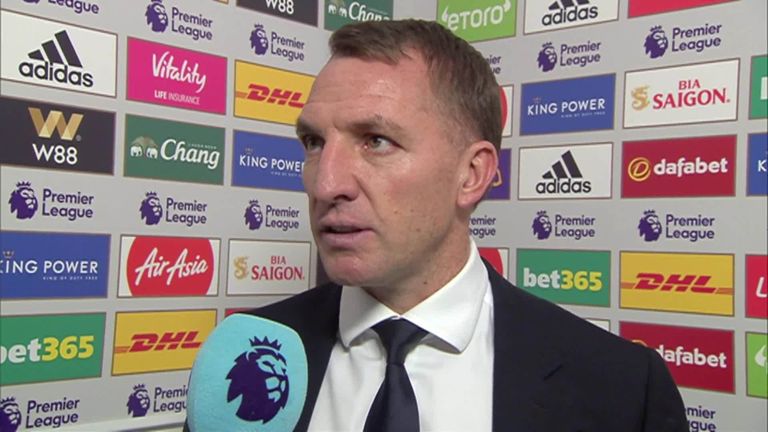 Leicester manager Brendan Rodgers says Jamie Vardy is a top team player who has impressed him tactically following their 3-1 win against Fulham.

Scott Parker: "Individual errors have cost us the game and have been a massive part of this year. It's going to be really, really tough. I sit here with realism. I understand the situation. I'm not blinded by that.

"The message remains that as long as it's mathematically possible we fight - but we know it's going to be really tough." Fulham's Scott Parker says defeat is hard to take after they played will in the second half in their match against Leicester.

Vardy proved the match-winner with two well-taken strikes, but it was the invention of Barnes alongside Tielemans and Maddison that caught the eye.

Leicester brought the attacking midfielder back from his loan spell at West Brom, and here was another demonstration of why it was felt he is ready to play at this level.

The 21-year-old completed 90.9 per cent of his passes while only Maddison (3) created more chances than his two during the match. When Leicester looked slightly vulnerable after Fulham's shock equaliser, it was Barnes' positivity and class that dragged his team-mates to victory - capped by his unselfish assist for Vardy's second.